Why Murder-Obsessed Juggalo Band Twiztid Compares Itself to Jesus 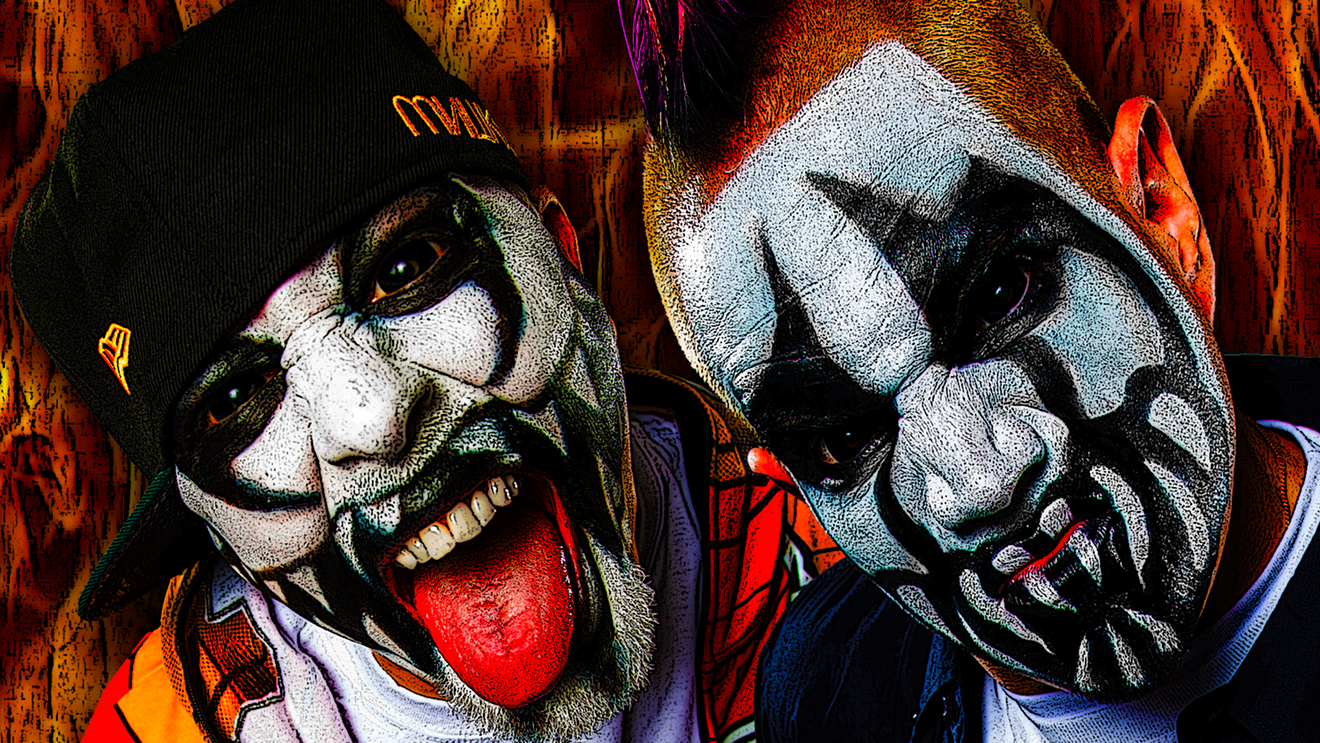 Twiztid broke off from Insane Clown Posse five years ago and has been thriving ever since. Twiztid
It doesn't take long for Jamie Madrox, who paints his face like a wicked clown and raps about killing people, to compare his horror-core duo Twiztid to Christ.

"We're like Jesus, man. We accept everybody," the proud juggalo shouts into the phone from a tour bus somewhere in New Mexico. At Twiztid shows, some fans arrive painted, others unpainted. "Everybody's just doing their thing. That's how we like it," he says.

Madrox shouts a lot — kinda like a WWF wrestler. He grew up bullied, a fat kid turned fat man, and he references his weight when he talks about performing: "I try to leave it all on stage because I'm a larger gentleman, and I have a lot to leave, and I want to make sure I leave all of it on stage for all those in attendance."

He describes his shows as "fucking crazy every night."

His collaborator, Monoxide, almost puked while performing, says Madrox, who's had his fair share of mishaps. "I almost fell off the stage in a crazed, deranged, delirious hot setting," he explains. "Somehow my eyeballs were sweating, and I just got mad delirious and backed into a road case and almost fell off the stage. That's about as crazy as I've gotten thus far." 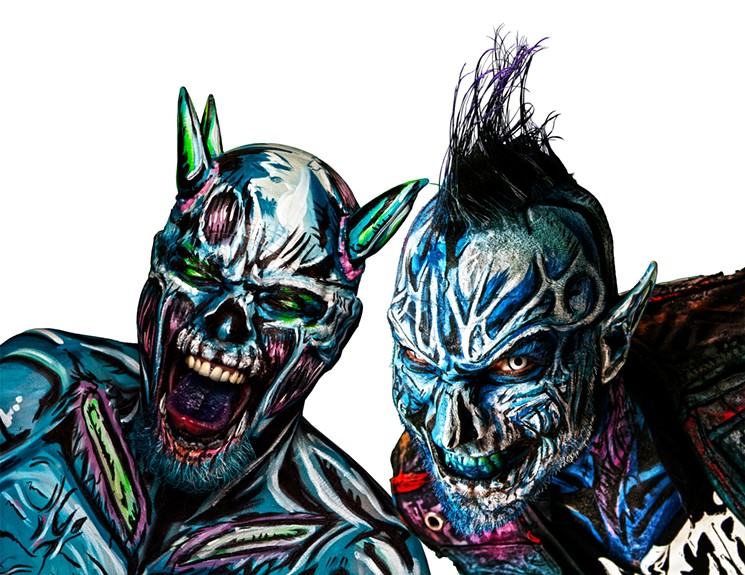 Twiztid plays the Roxy Theatre June 2 and 3.
Twiztid
Madrox's performance in Denver — June 2 and 3 at the Roxy Theatre — comes on the heels of a murder in Denver in which a death-metal singer with a painted face and daggers on his gloves (something Twiztid sings about) slashed another man outside Torchy's Tacos, an incident that makes Madrox upset.

"That sucks," he says. "That's very sad. What we try to do is we tell everybody that we're like the audio medicine. We want to be the release for you. If you're ever going to do something in the regard of that, we would rather you go and put yourself in the car and lock the door, turn up the radio, put on "Kill Somebody," punch the steering wheel, let us kill them for you on wax, and then go back in and deal with your shithead boss that you want to cut his fucking head off and put it in the locker room. You know what I mean?"

Early on in its career, Twiztid was embraced by the Insane Clown Posse, joined its record label Psychopathic records, and developed a juggalo fan base. But the duo found it hard to live in the shadow of their more successful horror-core compatriots.

"We were more or less the posse to the Insane Clowns," says Madrox. So five years ago, Twiztid broke off from ICP and formed its own label, Majik Ninja Entertainment. "It was time for us to move on," he says. "You can't live in your mom's basement forever. At some point, you've got to be a big boy and do you. Some people took offense at that. It's not like we broke up Van Halen. We were two different groups, you know what I mean?"

Madrox says most fans came along for the ride, but some were resentful. This year the split between ICP and Twiztid widened when the latter refused to participate in ICP's Juggalo March on Washington in September. Then, ICP didn't uphold tradition and invite Twiztid to the Gathering of the Juggalos.

These days, Madrox feels at peace with the split. "It was time to leave," he says. "There was nothing they could do for us other than run the same route we had been running. Since we left there, you can see the volume of work we've put out has been astonishing. I've done more in the past five years than I'd done in almost fifteen years the other way. If that's not fucking proof in the pudding right there, then I don't know what else to say."


Madrox is a paradox. He dislikes how so many people are wasting their lives away on social media, but he uses it daily. He wishes people would treat each other kindly, but he raps about horrific violence. He preaches tolerance and equality, but he steers clear of policy debates.

Madrox isn't trying to change the system — but he thinks about it. "I'm definitely not running for office, but in this day and age, who knows? I might fucking win," he says. "Isn't that scary."

While he steers clear of politics, Madrox waxes philosophic about religion. "I went to Catholic school as a kid, so I'm crazy fucked up in the head. I've been beat up by nuns and shoved around by priests and shoved down the stairs and all that good shit. But, yeah. I like to say that I'm Catholic but don't practice. That's who I am. Absolutely."

Twiztid is often branded as a satanic band by evangelical critics. "You get the protesters out here in New Mexico with the signs. They're out there preaching to the people about God, and there's been a time or two that I've actually gone out there and told them, 'That's crazy. You're actually preaching against me, but I love God. I thank God every day for being able to do what I do for a living.'"