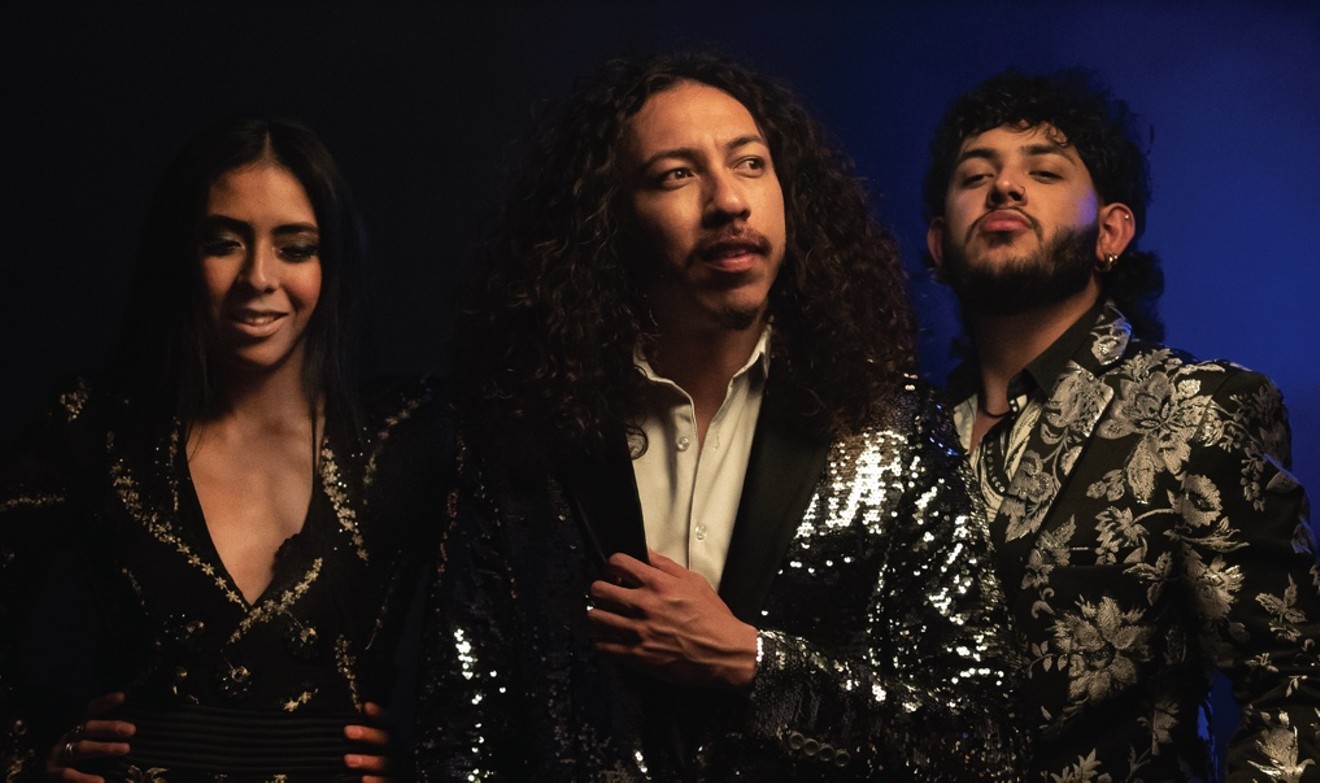 IZCALLi headlines the Gothic on Saturday, December 10. Ana Gomez
The Denver alternative/hard-rock band iZCALLi has come a long way since forming in 2005, and its path to headlining the Gothic Theatre on Saturday, December 10, traces a triumphant full circle. “Oddly enough, one of our first gigs was at the Gothic,” says frontman Miguel Aviña. “We opened for a band called BEBE. There was a local promoting company at the time called Nobody in Particular Presents, and they were kinda the first ones, independently, that were risking to bring Latin artists.

“It was such a cool experience, starting out as a band and getting to play such a cool venue, and immediately be immersed in what it’s like to be a level up,” he adds.

Aviña jokes that because iZCALLi wasn’t “that good at the time,” the band should’ve been playing its wildly energetic rock (intermittently sung in Spanish and English) at small venues such as the Lion’s Lair or Larimer Lounge. Instead, the band worked its way into opening slots for renowned Latin artists at major theaters, including the Ogden.

“We didn’t even have those opportunities [to play small clubs], because we weren’t even known in that scene — but in the Latin scene, we were opening these shows," Aviña explains. "We were very fortunate to do that, because we got to see and play with a lot of legends of the rock en español scene — bands I grew up listening to, as well.”

According to Aviña, getting to gig with established artists at large venues when iZCALLi was just starting out helped to skyrocket his band’s growth and momentum. Returning to the 1,100-capacity Gothic as a headliner is a testament to iZCALLi’s decade-plus of development in the Colorado music scene.

Aviña says it’s “full circle, starting out playing a show early on at the Gothic as an opener, and then building a career, now being able to say, ‘We’re back at the Gothic, but now we’re the headliner. It’s our show. We get to call the shots. We get to bring the bands we’re going to give an opportunity to open. People are here for us.’ It’s a treat.”

From the time iZCALLi began, Aviña and his bandmates — including his sister, Brenda, on bass since 2006 — have played every show like it’s their last, bringing the kind of energy music lovers expect at arena-rock concerts no matter the venue (even Coors Field’s party deck one time for Hispanic Heritage Day). Aviña, who was born in Mexico City, says he learned the necessity of full-on energy from performing with his father, of the rock band El Cro, while growing up, as well as listening to classic rock and punk rock as a kid. He also learned early on about the importance of playing music with a message, and rarely separates his activism from his music.

“Just doing research when I was starting my career of the influential figures in music, a lot of them were involved in some kind of way in the community, in different aspects — some of them more extremely and intensely, through political views and things like that," he says. "For some people, it works. Our music is not political, yet we do still have an agenda in terms of cultural diversity, inclusion, equity. More recently, it’s been about equity.”

Aviña adds that playing in iZCALLi with his sister — who kept rocking through two pregnancies — has taught him some important lessons: “They say everything happens for a reason. At the time [of Brenda’s first pregnancy], my outlook about creating music, and this project, and this fantasy of music for me was a very ‘the show must go on’ kind of attitude. It worked for me for a long time, but it also affected my life by doing that, in so many ways. I told her [later], ‘Hey, maybe I was too hard on this situation. Maybe I could’ve been more supportive about it.’

“It’s been a growing experience relationship-wise with my sister, in terms of her and I creating not only a stronger musical relationship, but also a brother-sister relationship that can be grounded on a common goal, which is music," he continues. "But also a common love for each other, and respect for our time and our direction in life.”

Izcalli is the name of the final month of the Aztec calendar, and it’s also known as "rebirth month." iZCALLi’s latest album, Rebirth, was released earlier this year and represents resurrections of several kinds, including Aviña’s experience getting vocal-cord surgery in Mexico to save his voice.

“A lot of spiritual awakening happened during that time for us," he adds. "When we finally got into the studio to record that album, we really didn’t have an expectation, and we were able to not really have any attachments to the things we had done previously and just let it go, and flow with the music in ways we hadn’t done before.”

That's heard in the song “Unglued” — not just in its intense energy, which iZCALLi has always had, but in its anything-goes attitude, with Led Zeppelin-style hard rock, soaring alt-rock vocals and hardcore punk. Such songs deserve to be played — and played loudly — on the kind of big stage that iZCALLi headlines on Saturday.

IZCALLi, Saturday, December 10, 7 p.m., Gothic Theatre, 3263 South Broadway, Englewood. Tickets are $30-$35.
KEEP WESTWORD FREE... Since we started Westword, it has been defined as the free, independent voice of Denver, and we'd like to keep it that way. With local media under siege, it's more important than ever for us to rally support behind funding our local journalism. You can help by participating in our "I Support" program, allowing us to keep offering readers access to our incisive coverage of local news, food and culture with no paywalls.
Make a one-time donation today for as little as $1.