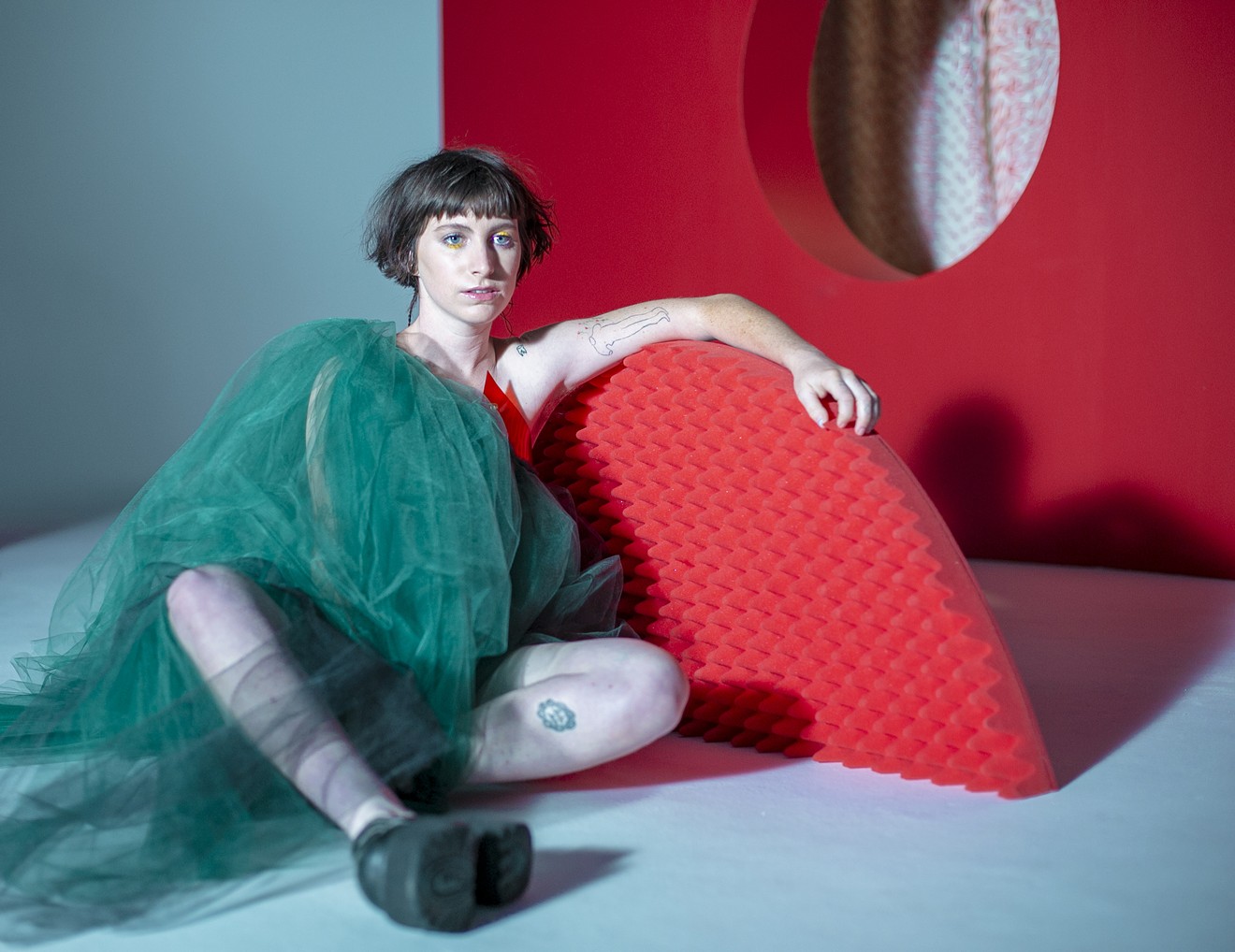 Jilian Medford is the experimental noise-rock band Ian Sweet. Kelsey Hart
Jilian Medford trusted her gut — and the result is her best album to date.

After her noise-rock band Ian Sweet released its debut album, Shapeshifter, in 2016, Medford felt pressed to change something. That band was her project and her music, but the relationships within it were taking a toll on her, and she didn’t feel like things were headed in the direction she initially intended when she started the project as a student at the Berklee College of Music.

With her new album, Crush Crusher, released on October 26, Medford seems to have found a balance, demonstrating personal strides she’s made toward mental health and anxiety management as well as a sound that better reflects her taste and musical goals.

“I think the new record’s a bit more mature, as far as how I’m expressing myself. The same themes exist, but I think I’m just talking about them more openly, rather than creating a layer over them," Medford says.

“I went through some things with my previous bandmates that weren’t the best. I was feeling a little bit confused about my role and my role as a female guitar player and singer," she continues. "My drummer was always suggesting — well, demanding — that I only sing and that we get another guitar player, and just made misogynistic comments that made me feel inadequate and self-conscious while showing them things that I wrote or playing live, like I’m not capable. I’m not as good as the boys."


The situation called for confidence — the very thing that the situation stripped her of. Still, the time had come for her to figure out how good she could be without being held back by her own band, which had turned toxic, and so Medford decided to pull the plug on the group's current iteration and figure out the next step in her career.

She took some time to explore herself, the music she could make on her own, and traveled a bit, hoping to rediscover why she even began Ian Sweet. What she found was that despite going through difficult times with bandmates and feeling lost, she could always find her way back.

For Crush Crusher, Medford allowed herself to gravitate closer to her creature comforts of blending experimental and noise rock with confessional singer-songwriter lyrics. There's a brightness to the record that suggests that she's even having some fun with it.


“I hit a point where I needed to start believing in myself and back to the root of why I started this project. I just feel much more clear-headed, and it was a very necessary choice to make. And I think it really shows that these songs are mine," she says. "This record was definitely more balanced for me. I'm still feeling a lot of the anxiety and mental health issues I’ve death with my whole life, but dealing with them in a more adult way.”

Part of Medford’s path back to her roots involved letting herself go down rabbit holes of sounds during the writing process and believing that she’d come out the other side with a better sense of where she was trying to go. She isn’t afraid of noise rock or psychedelic textures, and often follows what sounds good until it simply doesn’t. Medford will rock the hi-dive this weekend.
Michael Tyrone Delaney
While studying at Berklee, in a sea of talented songwriters wielding acoustic guitars, Medford was always most comfortable clearing her mind and letting different electric guitar sounds and pedals take her to new places that she could quickly find her way back from. Over time, she still had the desire to do the same thing, but was around people that did not share the necessary amount of confidence in her abilities to let her be who she was.

Today, she’s back to where she was in college, more or less, but with proof that she was right to trust her gut. Because of that, she makes the music she likes once again, she’s re-committed to staying centered regardless of her peers or bandmates, and she’s figured out how to lean on her own intuition, however terrifying it may be.

“I just feel like there’s more trust I’ve been giving myself, which has allowed me to feel more confident. Trying to trust yourself makes you confident at the same time, but it also makes you extremely self-conscious, because you’re giving yourself all the power, or something weird like that," she says. “I’m trying to find that balance of playing music alone now. I have other people that play with me now, but I have to trust that what I’m doing feels good, and I don’t have to really check in with people anymore. It takes a lot to be doing that on my own, which is part of growing up.”

Ian Sweet, with Young Jesus, Saturday, October 27, hi-dive, 7 South Broadway.
KEEP WESTWORD FREE... Since we started Westword, it has been defined as the free, independent voice of Denver, and we'd like to keep it that way. With local media under siege, it's more important than ever for us to rally support behind funding our local journalism. You can help by participating in our "I Support" program, allowing us to keep offering readers access to our incisive coverage of local news, food and culture with no paywalls.
Make a one-time donation today for as little as $1.