On early albums like 2010’s Lupon and 2012’s Court the Storm, the Portland-based group brewed an intoxicating blend of traditional Mexican music, gentle American folk rock and dreamy Northwest indie pop. The sound was beautiful and distinctive enough to turn heads across the continent; SPIN Magazine declared Mendoza “ever closer to being crowned the Latin-rock Feist.”

But after working with producers Chris Funk (the Decemberists) and Steve Berlin (Los Lobos) on Lupon and Court the Storm, respectively, Mendoza decided to take production into her own hands for 2016’s Ojos del Sol. The result was an album that teems with idiosyncrasies, including unexpected rhythms, unconventional sounds, stronger vocals from Mendoza and more Spanish lyrics.

“I think that was the beginning of me...taking it on on my own and really exploring my voice,” Mendoza tells Westword. “It’s been painful knowing that there’s something so natural that wants to be said.” 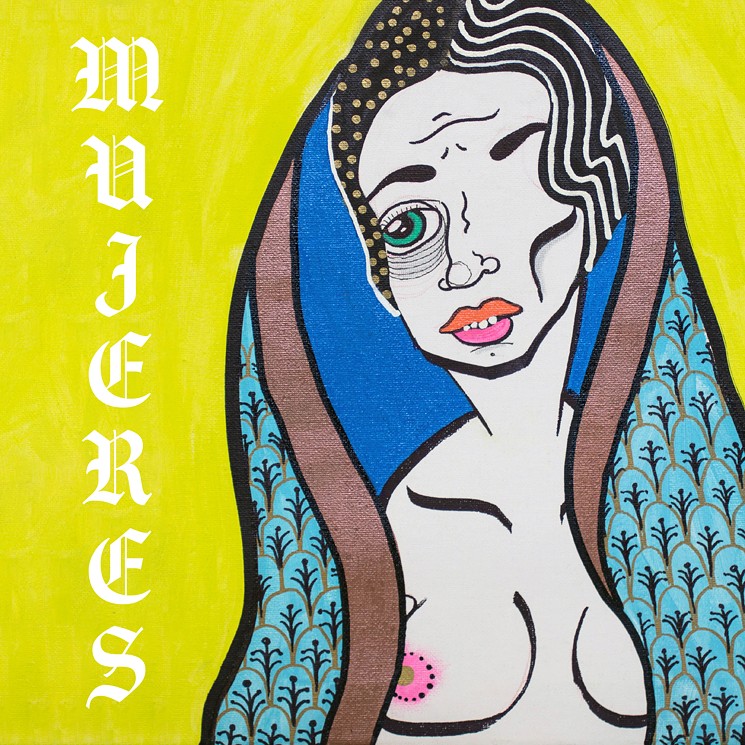 Y La Bamba's Mujeres will be released in February.
Courtesy the artist
Y La Bamba’s next album, Mujeres, isn’t out until February, but it's proof that Mendoza’s explorations are paying off artistically as well as personally. The thirteen-track song cycle is an absolute stunner, packed front to back with lovely songs that push the band into new places...and then places beyond those places, too. These are Mendoza’s best — and most experimental, and most danceable — songs yet.

We recently caught up with Mendoza to talk about her journey to making Mujeres.

Westword: The songs on Mujeres definitely feel like they are headed in a weirder direction than your past work. Why do you think that is?

Luz Elena Mendoza: I think just from feeling validation now as a woman, as a producer, as a writer, as a performer, as an activist and as a feminist. Even in my mid-thirties, I’m feeling all these awkward stages of growing. Because I come from patriarchy, right? And I grew up with Mexican parents from Michoacán, Mexico. The misogyny there is fuckin’ intense, and it really kept me in a shell for so long, and I just survived in that way.

So society has hindered me as a woman to really explore all parts of myself, creatively, emotionally, psychically, physically, everything. And so I went on this journey of just allowing that voice to talk to me. My exploration is me exploring me, and people get to see that if they want to share that with me.

Going into making this album, did you have a certain sound or direction you knew you wanted to go?

It’s less about the sounds and the style for me. It’s more about how unhinged I am and how free I am, and how I want to keep exploring that and hoping that I can project that back to the audience and my people and my community so they can also be unhinged as well and manifest beauty and togetherness and strength. Because as a person of color feeling all these things that I have to renegotiate with people and communities that have put boundaries (on me), now I’m taking the painful initiative to do it on my own.

I’m sharing my whole life with a bunch of people, and they get to judge it and tell [me] what they think about it and tell [me who I am]. And because I come from trauma, I just absorbed that completely. And now I’m healing from that, and I’m just like, “ahhhhhhhhhh,” and I’m wiggling it all out. And I know that some people are going to be like, “Oh, this is such an interesting direction” when really the question is, “Hey, how are you? How’s your spirit?” So I can’t stress enough how I want to emphasize that it’s not about the style and the sound and this genre or whatever. It’s not about that. Wherever I land, I will land because I let myself go there. Luz Elena Mendoza has been making music under the name Y La Bamba for more than a decade.
Steffannie Walk
Fair enough. It does, however, feel like drums and rhythm are a much more prominent component of this recording. Why?

I've been always inspired by pedals and analog and things that I’ve seen these white dudes do, or just men in general. And I just made myself so small that I didn't know I could achieve those things.

I’m a percussionist. I play drums. Those are really intuitive, deep, inherited, ancestral rhythms. So I surrounded myself with drums and drum machines, and I just love old cumbia, Mexican cumbia, Colombian cumbia, all these things that are just visceral and natural to me. So I finally just decided to make decisions on my own, you know?

The decision was made for me to try to love myself and believe in myself that I am capable of being a producer, and so I allowed myself to explore that. Because I felt like I was trapped...with the wrong musicians — good people, but the wrong musicians — and because I did not believe in myself, I just let them tell me what production was. I’m not doing the blame game; I’m just being objective here. I finally learned that later in the game.

Through a lot of tears and pain, I was like, “I can do this.” But it comes from a lot of depression and suicidal thoughts and feeling really down and feeling like you don’t believe in yourself until you arrive. I need to share that, because that’s super-important. I’ve struggled so much to believe and to take on these roles, because I never thought they were meant for me.

Y La Bamba, with Don Chicharrón; 8 p.m. Thursday, November 8, Lost Lake, 3602 East Colfax Avenue, $13 to $15.
KEEP WESTWORD FREE... Since we started Westword, it has been defined as the free, independent voice of Denver, and we'd like to keep it that way. With local media under siege, it's more important than ever for us to rally support behind funding our local journalism. You can help by participating in our "I Support" program, allowing us to keep offering readers access to our incisive coverage of local news, food and culture with no paywalls.
Make a one-time donation today for as little as $1.