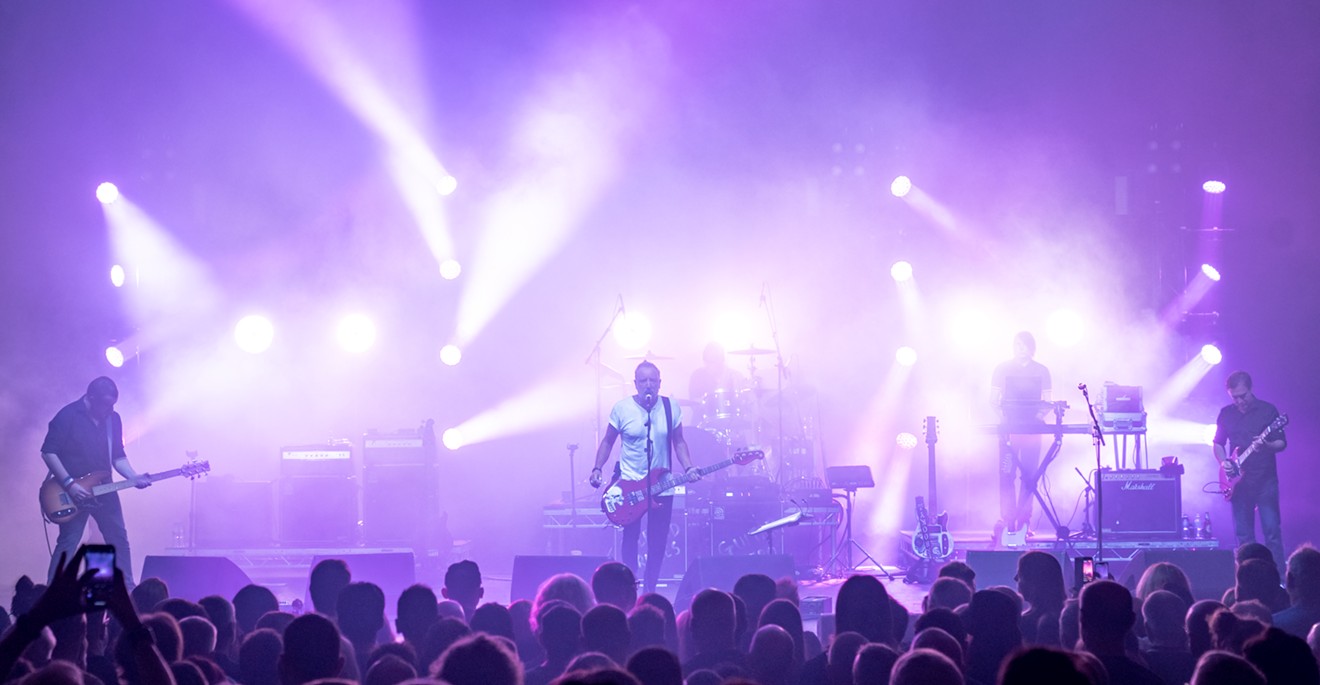 Peter Hook & the Light Dominic Simpson & the Light
Joy Division is one of those rare bands that doesn’t really sound like anything that came before it — a true original.

A co-founder of both that group and New Order, Peter Hook has been celebrating the music of those bands with Peter Hook & the Light, which is playing the Ogden Theatre on Monday, September 5. He credits Ian Curtis, the late frontman of Joy Division, with educating him musically in 1970s Manchester, England, where the band first came together.

“He would say to me, ‘Listen to this record,’ and he gives me Metallic K.O. by the Stooges,” Hook recalls. “He’d give me Velvet Underground Loaded, and he’d give me a John Cale solo album. Then he’d do Can and Faust and Kraftwerk. … He really, really did educate me from a musical point of view.”

Joy Division recorded 53 songs between 1976 and 1980 before breaking up after Curtis, who struggled with depression and epilepsy, took his own life. Despite its brief existence and only two albums to its name, the band has had an outsized influence on groups that followed. So has New Order, which was formed by Hook and his bandmates Bernard Sumner and Stephen Morris after Curtis’s untimely demise. Hook’s idiosyncratic bass style, which he credits to a bad amplifier early in his career that forced him to play high on the neck, has also influenced many in the alternative and punk world.

For his part, Hook doesn't hear the uniqueness inherent in Joy Division's sound, perhaps because he's too close to the music. He can, however, hear the influence on other bands. The same goes for New Order.

“To me, most bands sound like Joy Division or they sound like New Order,” he says. “New Order’s mix of dance and drum machine sequences with rock is more of a traditional group format these days because of the technology that everyone has. I’m very lucky indeed to have been in both.”

As Joy Division played shows around Manchester, its style evolved from its early punk leanings directly inspired by the Sex Pistols into the post-punk it’s now known for pioneering. Post-punk kept the energy of punk, but discarded its rock-and-roll roots for a more experimental sound.

As original as the band’s sound was, Hook remembers that people at shows began to remark that Joy Division sounded somewhat like the Doors, at least in a live setting. “I thought ‘Who are the fucking Doors?’ I’d never heard the Doors,” Hook says. “I said to Ian one night, ‘Have you got a Doors record? Everyone says we sound like them.’”

He says Curtis shot him an odd look and somewhat begrudgingly admitted to being in possession of a Doors record, which he handed over. Hook gave it a listen and heard the similarity. “Oh, my God, we did sound like the Doors,” Hook recalls. “That's why he didn’t give it to me, because he didn’t want me to know we sounded like the Doors.”

He adds that Joy Division often covered “Riders on the Storm” live, but no one ever seemed to notice the band was covering a Doors song. (He doesn’t know of the existence of any recordings of the Joy Division version.) When asked if Peter Hook & the Light would cover it, Hook says he isn't sure.

“I don’t know if it would be too subtle…for most of the audience to get it,” he says. “But as a cover version, it’s a beautiful song. When Ian gave me that first LP of the Doors, I became a huge fan. I really am a massive Doors fan. American Prayer is one of my favorite LPs.”

Hook left New Order in 2007 — his departure was less than amicable — and a few years later formed Peter Hook and the Light as a tribute to the music of Joy Division and New Order. For its current tour, the Light is performing both Joy Division studio albums — Unknown Pleasures and Closer — along with uncollected singles, such as the beautiful, haunting “Atmosphere.”

“We are giving quite a long show,” he says with a chuckle. But it’s not the longest show he’s played as the Light: In 2012, the band played a charity gig for a church in Curtis's hometown of Macclesfield that had fallen into disrepair. He’d been told Curtis was a choir boy at the church. He thought, "Fuck it, let’s do every Joy Division song." It took more than three hours, but the crowd in the church seemed to love it.

“We played 53 songs — every song from start to finish, in chronological order,” he says. “Oh, my God, that was a hell of feat. It was great to do that. Maybe that will be the next tour.”

The shows open with a selection of seven New Order songs that will change nightly. One of Hook’s misgivings about his later years in New Order sprang from not playing what he considers great tracks, so he’s excited to perform those songs as well. “It was a source of eternal frustration to me,” Hook says. “We had this huge back catalogue of New Order that we never played, and also the amount of songs Joy Division had, and we never played them, either. We just stuck to playing the [same] songs over and over. It was boring.”

Hook says that a live Joy Division show sounded quite different from the band's studio work, in part because producer Martin Hannett overdubbed tracks and Sumner played guitars and keys on recordings that he obviously couldn’t play simultaneously in a live setting. With that in mind, Hook is focusing on making the performances closer to Joy Division’s recorded output.

“The band was a lot more angular and a lot more gritty,” he says. “We also played a lot faster. There was no subtlety to Joy Division live. It was a completely different group. What struck me about it is that most people who are Joy Division fans have only heard Joy Division on record.”

Hook sees the performances — which also highlight Hannet’s studio contributions — as an interpretation of Joy Division’s songs rather than an outright imitation. He admits that deciding how to proceed presented a bit of a quandary, because no one wants to be in a tribute act to his own band. He’s also received some flack from people who’ve accused him of cashing in on nostalgia, but he says he would have done that thirty years ago if he was only interested in the money. Two-and-a-half-hour sets also seem unlikely for someone dispassionately trudging through the hits night after night.

Hook has been surprised at the turnout over the past decade. A recent Boston show brought out a particularly lively crowd, and he still finds it pretty spooky to see kids, some who came with their parents, singing 45-year-old Joy Division songs. When he first started the Light, he expected to see an “audience full of fat old blokes like me,” so to see multiple generations in the audience is a joyful experience.

“Those songs we wrote when we were twenty, of isolation, of confusion, of anger, of what we didn’t know to do in the world — it’s still the same thing, isn’t it?” he says. “It still speaks to people of every generation. Ian’s words are wonderful. The music, I think, is fantastic. It shouldn’t be a surprise, should it, that you pick up fans every generation?”

Peter Hook & the Light, Monday, September 5, Ogden Theatre, 935 East Colfax Avenue, 8 p.m. Tickets are $36.50. For more information, visit peterhookandthelight.live.
KEEP WESTWORD FREE... Since we started Westword, it has been defined as the free, independent voice of Denver, and we'd like to keep it that way. With local media under siege, it's more important than ever for us to rally support behind funding our local journalism. You can help by participating in our "I Support" program, allowing us to keep offering readers access to our incisive coverage of local news, food and culture with no paywalls.
Make a one-time donation today for as little as $1.