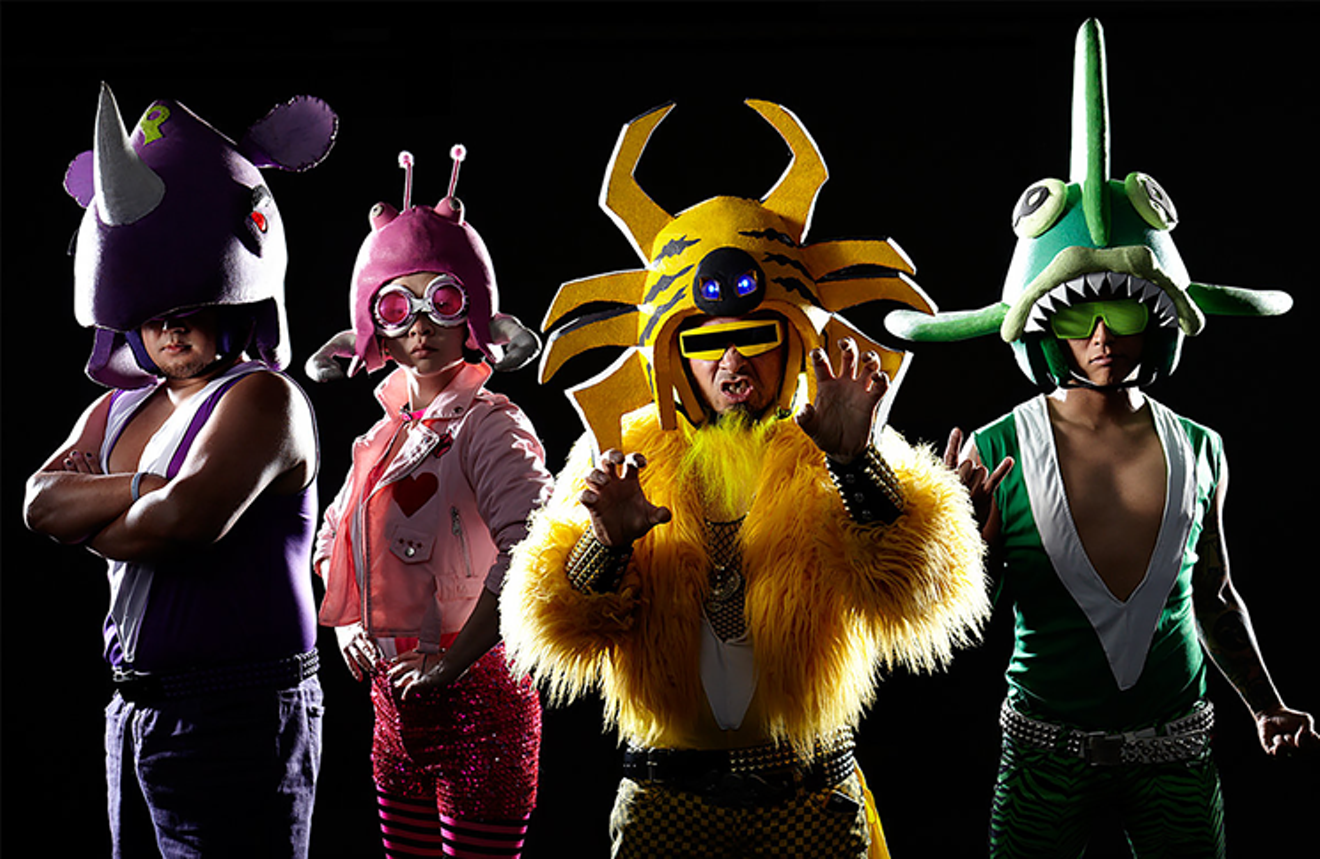 Peelander-Z will play the Marquis Theater on April 13. Courtesy of artist
They came from Planet Peelander to spread smiles onto everyone’s faces. Or, perhaps, Peelander-Z came from Japan, via New York, and based themselves in Austin. One of those is the true story, the other is the one that, quite frankly, we should all go out of our way to believe, because it’s way more fun.

All of the members of Peelander-Z share their names with colors. The leader is Yellow (aka Kengo Hioki), an excitable dude who swears he’s an alien. The band is completed by Pink, Purple, Green and Black. Blue and Red were previously in the band but left.

Yeah, it’s all a bit bonkers. The aesthetic is somewhere between the Power Rangers and the Aquabats. But it’s also all part of the fun. There’s a lot of it to be had. Strip away the alien stuff, and you have a really good pop-punk band in a Ramones vein and a decent underground following. Two decades into the band’s career, and Yellow is understandably happy with the way things have been going.

“I always try to do my best, and it changes because we change members or sometimes we change color, change our story,” he says. “It’s the same as life. You change something, and we’re gonna move with the change. Changing is sometimes a problem, but we get over the problem and then we’ll be flexible. Like an amoeba. We move and change. To reach twenty years has been very hard, but right now I feel super-happy about it.”

Speaking with Yellow is delightful. He talks at lightning speed, because he’s just so damned excited to talk about his band/alien race. If that backstory, about wanting to spread smiles on Earth, sounds hokey, it seems nothing but natural when Yellow says it. The guy is just a bundle of sunshine. Sometimes, it’s good not to take oneself too seriously. Punk-rock superheroes the Aquabats know it, and so does Peelander-Z.

“I met Christian [Jacobs, aka MC Bat Commander, the Aquabats],” Yellow says. “He speaks Japanese very well. I was surprised. We have kind of the same thing going on. They’re superheroes, while we’re from the Peelander Planet, here to get everyone smiling. That’s why I had to make you smile. That’s our project. It looks like we’re superheroes, but that’s not a costume; that’s our skin.”

Yep, the extraterrestrial members of Peelander-Z have, says Yellow, skin colored according to their names. The members, and therefore the colors, have changed a couple of times over the years, altering the rainbow vibe a touch. You have to love these guys. Meanwhile, the sound has changed a little over the years, too.

“We release a lot of different types of albums,” Yellow says. “A kids' album, a punk-rock album, and the last one was a heavy-metal album. But when we play them on the stage, it all sounds the same, like the Ramones. Ramones meets Power Rangers. Also Takeshi’s Castle (a Japanese game show). Eighties style, cosplay, and gaming, too. But if you describe just the music, it’s Ramones, old-school punk rock. You can say anything, though. Say whatever you want.”

Yellow lived in New York for twenty years before relocating with his band to Austin last summer. Now he says that Peelander-Z is a local Austin band, which certainly makes that city a tad more interesting. As a result of the band forming in the States, it doesn't actually have much of a following in Japan.

“They’re very curious because they never see our show,” he says. “We did two Japanese tours, but it was local indie style and only Tokyo people came. We also did a documentary movie, Mad Tiger, that got screened there. I’m going back to Japan for an art show in Tokyo, Osaka. That’s a good time to spread our name, because we’re not big there.”

Ah, yes, the movie. Mad Tiger is a behind-the-scenes deal, detailing the events that led to Red’s departure from the band, and the aftermath. It’s gloriously weird — part rockumentary, part sci-fi.

“The movie is the backside of Peelander-Z,” Yellow says. “It’s very hard to do that for a touring band. We’re not super-famous. We can’t make big, big money. So it’s very hard. People can see what we’re going to do on stage. On stage is super-happy, but behind is preparation. Ninety percent is working very hard. Ten percent is being super-happy on stage. That’s entertainment. Everyone understands the backside of entertainment. You’ll see from the movie, though, I never give up.”

The last full-length album was 2013’s Metalander-Z, and Yellow says that there’s nothing new on the horizon as yet. That said, he says the band has some new dance moves prepared for the Denver show, and perhaps a couple of new songs.

“I really love Denver,” he says. “The Marquis Theater — all of the people are crazy there. We played three years ago at Riot Fest. So crazy. We were so happy to play there. Actually, we played in Denver in 2004 for the first time. In the beginning, nobody came. It was hard to attract people. Now we’re seeing, little by little, people love it. We love Denver, and we want to enjoy the mountains. We’re gonna make some mountain songs for you. You have to wear mountain costumes.”

He might be joking about that last bit. But only might. What we do know is that a Peelander-Z show is going to be zany, intensely insane, and certainly colorful fun. Check your cynicism with your jacket.