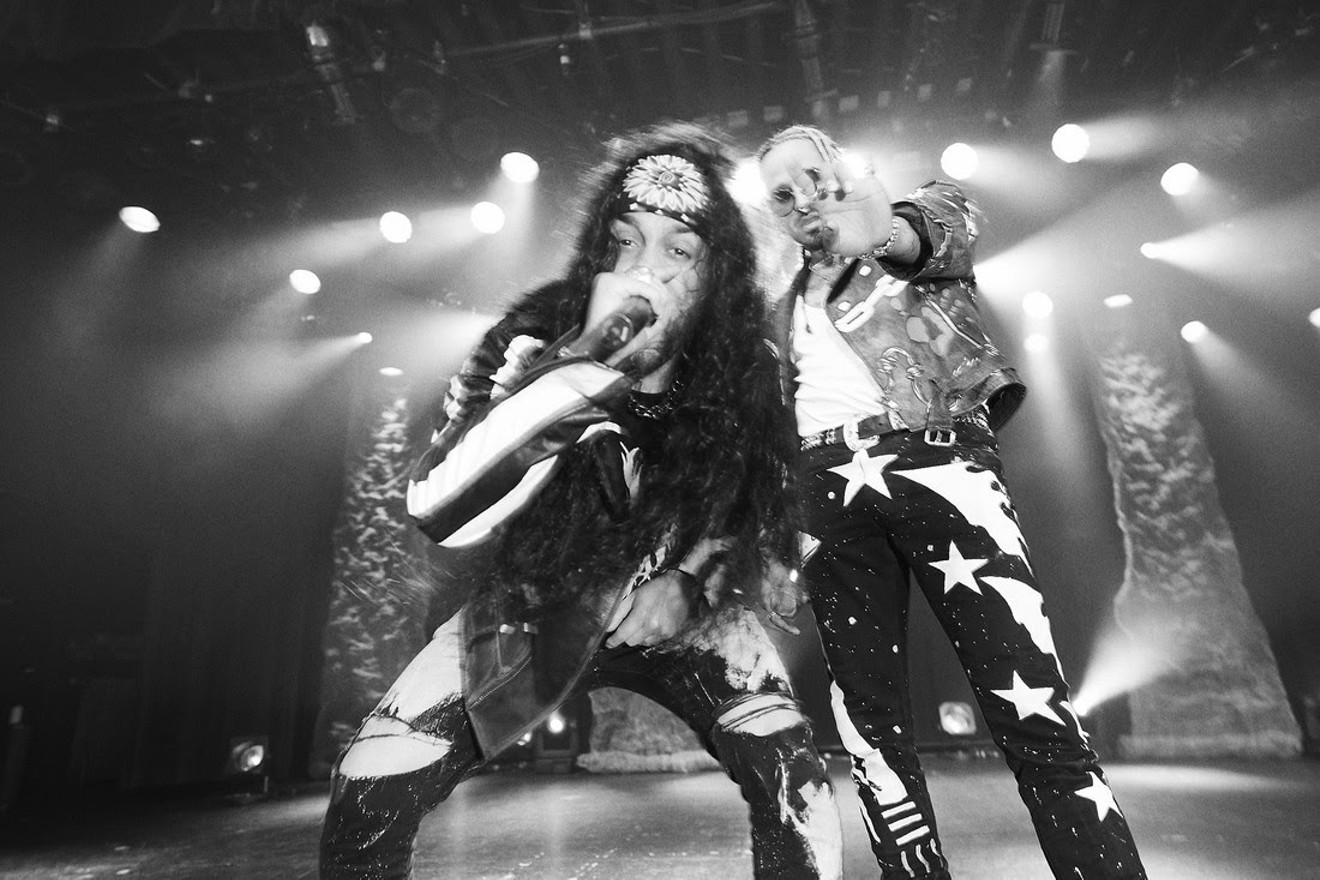 “Life After was about living through trauma, living through the life we are forced to live through,” says Quinton “Yung Trybez” Nyce. “‘I’m Good’ is just letting people know...that we're still here and we're good to go.”

Darren "Young D" Metz says the album dealt with, among other things, the concept that no matter what stage you're going through in life, there’s life after.

He adds that the record and its creation were healing, and necessary for them to move forward. The two were cooped up at home for much of the pandemic, and Nyce says the isolation was “tough on the mind, body, spirit, bank account, and the relationships with people that you weren’t able to continue on with.” Both are relieved to be back on the road touring; Snotty Nose Rez Kids will be at Summit Music Hall on Sunday, September 18.

“It’s medicine for everyone that’s in the room whenever we're all together in a venue doing what we do best,” says Nyce.

Metz and Nyce are both members of the Haisla Nation, a First Nations community in British Columbia; both currently reside in Vancouver, where they got their start playing open mics in the coastal city’s hip-hop scene. They discovered hip-hop through older family members when they were kids.

“In the early days, we’d hang out with older cousins playing basketball, and it was just all the classic ’90s stuff,” Metz says. “Especially the West Coast — Tupac, Dre, Snoop and all them. Obviously you had Biggie, the East Coast, and it just evolved over time.”

Nyce adds NWA, Bone Thugs-N-Harmony and Eminem to the list as early inspirations.

“My uncle used to listen to Outkast a lot, so we got introduced to Atlanta sounds really early,” he says. “We fell in love with what rap can do for people’s lives.”

Hip-hop allows him and Metz to express themselves the way they want to and tell stories their own way, Nyce says. “Indigenous people are natural-born storytellers," he explains. "I come from a family of leaders. Being able to use my voice is important to me and my family and our community, because I do feel like I have a powerful voice.”

Metz recalls that his mother was always a host for the community when feasts or other gatherings were happening, and he’s taken inspiration from that memory and applied it to his music. He reiterates that he and Nyce just want to tell their stories the way they want them to be told. “When we were coming up and no one was listening, we knew in the back of our minds that if we keep telling our story the way it needs to be told, the universe will gravitate toward it,” Metz says. “That’s what we’ve been doing, and that’s what we are going to keep doing.”

Snotty Nose Rez Kids evokes groups such as Wu-Tang Clan. The comparison is found less in their sound — the duo has a unique style, delivery and sonics — than in the way their lyrics offer an impression of the world they come from. They often tackle serious issues impacting the Indigenous community as a whole, but Metz says the two speak from their own context.

“We can’t necessarily speak for everybody,” he says. “We know from just speaking from our context, being raw and uncut with it, people connect with it. It not only helped us find a sense of belonging and finding ourselves, but it helps other people, too.”

Nyce adds that Indigenous and other marginalized artists often get caught up in being “a voice for the people,” but that's not what he's setting out to be. He says you can only be a voice for yourself, and if people relate to it, that’s great: “We are both cis males from a small Indigenous community in northwest BC that moved to the city, and we only speak from our context. We keep in mind that a lot of people say we are a voice for the people, and we make sure we are sensitive to that.”

The two strive to provide a safe space at their shows, which they say Indigenous kids often lack. They grew up in a somewhat segregated community, where finding your niche could be a challenge.

“We let people know they have an opportunity to be comfortable with who they are, no matter where they came from or who their parents were,” Nyce says. “To us, as long as you know who you are, that’s all that matters.”

He adds that other Indigenous people they talk to during their travels have said the music has helped give them a sense of identity and belonging.

“We’re just proof that we can exist in this society that we live in, that we are forced to live in,” he says. “A lot of people are able to live in their own skin because of the music we make. … When we were growing up, that wasn’t really offered to us.”

Snotty Nose Rez Kids, 7 p.m. Sunday, September 18, Summit Music Hall, 1902 Blake Street; tickets are $17.50. For more music, visit snottynoserezkids.com.
KEEP WESTWORD FREE... Since we started Westword, it has been defined as the free, independent voice of Denver, and we'd like to keep it that way. With local media under siege, it's more important than ever for us to rally support behind funding our local journalism. You can help by participating in our "I Support" program, allowing us to keep offering readers access to our incisive coverage of local news, food and culture with no paywalls.
Make a one-time donation today for as little as $1.