The Corner Girls Call It a Night 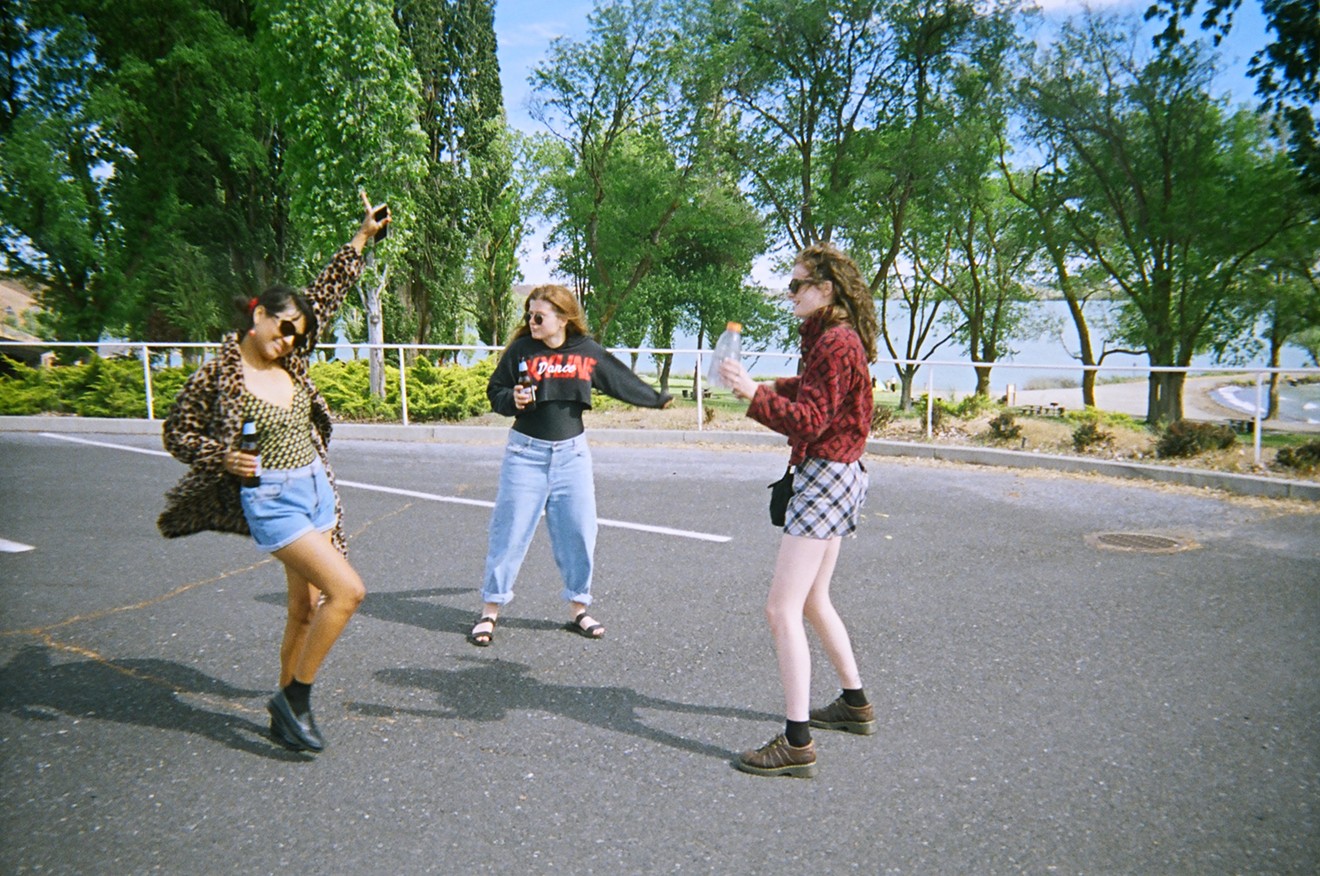 I first covered the band for Westword a few months after meeting frontwoman Breanna Ahlgren and drummer Madi Pietruszka at a DIY show in early 2016. (I met bassist Jessica Pulido later that summer, but before the piece ran. She'd been studying abroad in Europe and looking positively worldly in photos online shot in Prague.) By midsummer, I knew I liked their music and loved the impromptu house parties that sprang up in the four-bedroom Baker bungalow they shared, situated just blocks from the hi-dive and a changing South Broadway.

The piece ran in July 2016. After that, we became fast friends. We were in our early twenties and actively looking to have fun, which we almost always found. The next summer, the Girls invited me to be some amalgamation of merch girl, roadie, driver, photographer and manager (though we used the term “momager,” an homage to Kris Jenner and the hours we sank into Keeping Up With the Kardashians marathons in the bungalow's living room) on a tour that wound north up to Idaho and over to the Pacific Northwest, then down the West Coast, playing this punchy, garage-y, glitter-punk feminist music that people loved.

The band made music about young women's lives, thoughts and experiences, and young women loved it. Breanna’s lyrical formula was deceptively simple: She wrote what she knew from the perspective of who she was. Everything was fair game, including blackouts, weed paranoia, shitty men of all stripes, the Internet (“Fuck your cuffed-up jeans/Stop sending me unrelatable memes” stands out in this category), and wishing your friend would dump her awful boyfriend.

The Corner Girls were irresistible.
Elle Carroll
Good as they were, and given that nobody else in Denver was doing what they were doing, the Girls didn't really have an ego about it. They were naturally averse to bro-y music-scene gatekeeping, and made a point to involve people. They played “Kisser” all the time, which had a call-and-response that went, “Who’s a better kisser?/Me or my sister?” (This always earned a few laughs, especially from new audiences.) Breanna would make the crowd practice beforehand until the effort was to her satisfaction. They chose a prom theme for their 2018 UMS set. They wore thrift-store prom dresses and crowned a prom queen from the crowd at the end of the night. They dared you not to be totally charmed. And above all, the Girls had an innate understanding of how to make femininity appear powerful, engaging and fearless. They refused to believe that young womanhood was anything to be ashamed of, and they were right.

That fearlessness, along with an uncompromising refusal to take a single iota of sexist bullshit, was built in from the start. In a November 2015 review of a Broncho show the Girls attended, Reverb writer Amy McGrath spat, “Maybe they were driven wild by the fuzzy guitars and insanely catchy pop music, or maybe they were just drunk and up too late, but one thing’s for sure: Tuesday night at Larimer Lounge could have been the set for a new episode of Girls Gone Wild.” A month later, reviewing a Together Pangea concert the Girls also attended, McGrath again bemoaned an “annoying new Denver tradition” in which “drunk ladies looking for some unearned time in the spotlight bombarded the tiny Hi-Dive stage.”

Not one to take anything lying down, Breanna splashed McGrath’s Girls Gone Wild-referencing headline and the paragraph accusing drunk girls of cashing in on “unearned time” across a collage of vintage photos of girls dancing, over which she pasted the words “SLUT” and “WHORE” in pink lettering. She then posted the collage to the band’s Facebook page with the caption, “We promise not to call you sluts if you dance at our show!!!”

It's hard to imagine Denver without the Corner Girls.
Elle Carroll
It felt like Riot Grrrl — or at least what girls like us, born after the release of the first two Bikini Kill records, imagine Riot Grrrl was probably like.

I don’t remember the first time I heard the nickname “Menver,” but I remember thinking the Girls were a three-woman juggernaut against everything that silly-but-not-without-some-truth nickname implied. Denver’s DIY scene certainly had a similar gender imbalance (as above, so below — or, rather, so underground), and the sheer novelty of three women in a band together fed the Girls’ initial appeal.

But it was more than that, too: The Girls made a point of showcasing their femininity, of singing about it, of not apologizing for it or downplaying it. They didn’t so much resist the label of the Local All-Girl Band so much as go all in making music about being young and women and a little lost and a little cocky all at once. On the chorus of “Walk of Shame”: “I couldn’t find my underwear, I said that you could keep them/They were my favorite pair, I just hope you don’t sniff them.” Or on "Exed Out": "I'll dye my hair, get a new tattoo/So I'm somehow a different person than the one I was with you." Your local all-guy band could never.

On top of it all, the Girls had good timing. They broke into the scene during the last days of Denver’s more unregulated, pre-Ghost Ship DIY heyday. They played Deer Pile and the Juice Church basement, both long gone. One night at the now-defunct Backspace, they decided to make their set and costumes cowgirl-themed just for kicks. (For the record, the Girls were significantly ahead of the yeehaw-agenda trend. Credit where it’s due.) The move to more established venues came naturally, and they’d end up sharing stages with Hinds, Cherry Glazerr and Tacocat.

To that end, the Corner Girls were irresistible live. Breanna’s stage banter is clever, breezy and deceptively self-aware. She is girlish on stage and in life, unwilling to entertain the idea that femininity can’t be taken seriously. You underestimate her intelligence at your own peril. She’s allergic to just about everything but yerba mate, Angry Orchard and sugar-free Red Bull, all of which we drank by the boxload on tour. On the flip side, Madi: gregarious, honest, capable of doling out withering insults, the kind of through-and-through Leo that makes me believe in astrology. She’s an open book and unashamed of it. But going by that metric, Jessica is a brick wall — at least at first. She’s impenetrable to strangers, especially men, who adore her. She’s old-school cool, thoughtful and impossible to embarrass. That she’s the bassist feels like a corny joke because she is such a bassist: She’s reserved, secretly hilarious, a born negotiator, and looks great in sunglasses.

Earlier this year I had dinner with Jessica on South Broadway, picking at tapas in a new restaurant that, when this stretch of Broadway was the center of the Girls' collective universe, was a longtime gay bar called Compound Basix. It felt a little too symbolic, sitting smack dab in the middle of a changed Broadway and a changed Denver as the life of the band drew to a close. In other words, it was exactly the kind of on-the-nose image that would get you torn to shreds in a fiction-writing workshop. We waxed nostalgic about the band and what it had meant to all of us, laughing about how maturity and actual adulthood is closing in fast. Our days as fearless feminist punk party girls, when nights out could be measured in tequila shots and photo strips at the hi-dive, have given way to careers, graduate school and long-term relationships. The Corner Girls’ songs were always for the kind of girls we used to be: young and just starting to figure out life and womanhood and relationships. The members are no longer those girls, and it's time to move on. The ceaseless march of time and prolonged decay of the flesh...am I right, ladies?

You know how it is. The Corner Girls are throwing one last hi-dive bash on Saturday and then breaking up the band for good, thus depriving the local scene of its most reliable source of eye glitter and deliriously fun pastel-punk songs. Our changing city will be poorer for it.

The Corner Girls Farewell Show with Vic 'n' The Narwhals and Beau Beverage, on Saturday, February 29, at the hi-dive, 7 South Broadway, hi-dive.com.

Listen to The Corner Girls and more favorites from Westword writers on our Westword Staff Picks playlist.
KEEP WESTWORD FREE... Since we started Westword, it has been defined as the free, independent voice of Denver, and we'd like to keep it that way. With local media under siege, it's more important than ever for us to rally support behind funding our local journalism. You can help by participating in our "I Support" program, allowing us to keep offering readers access to our incisive coverage of local news, food and culture with no paywalls.
Make a one-time donation today for as little as $1.
Elle Carroll is a writer and photographer based in Denver. She has written for Westword since 2016.
Contact: Elle Carroll
Follow:
Twitter: @itsellecarroll
Instagram: @mosh_spice