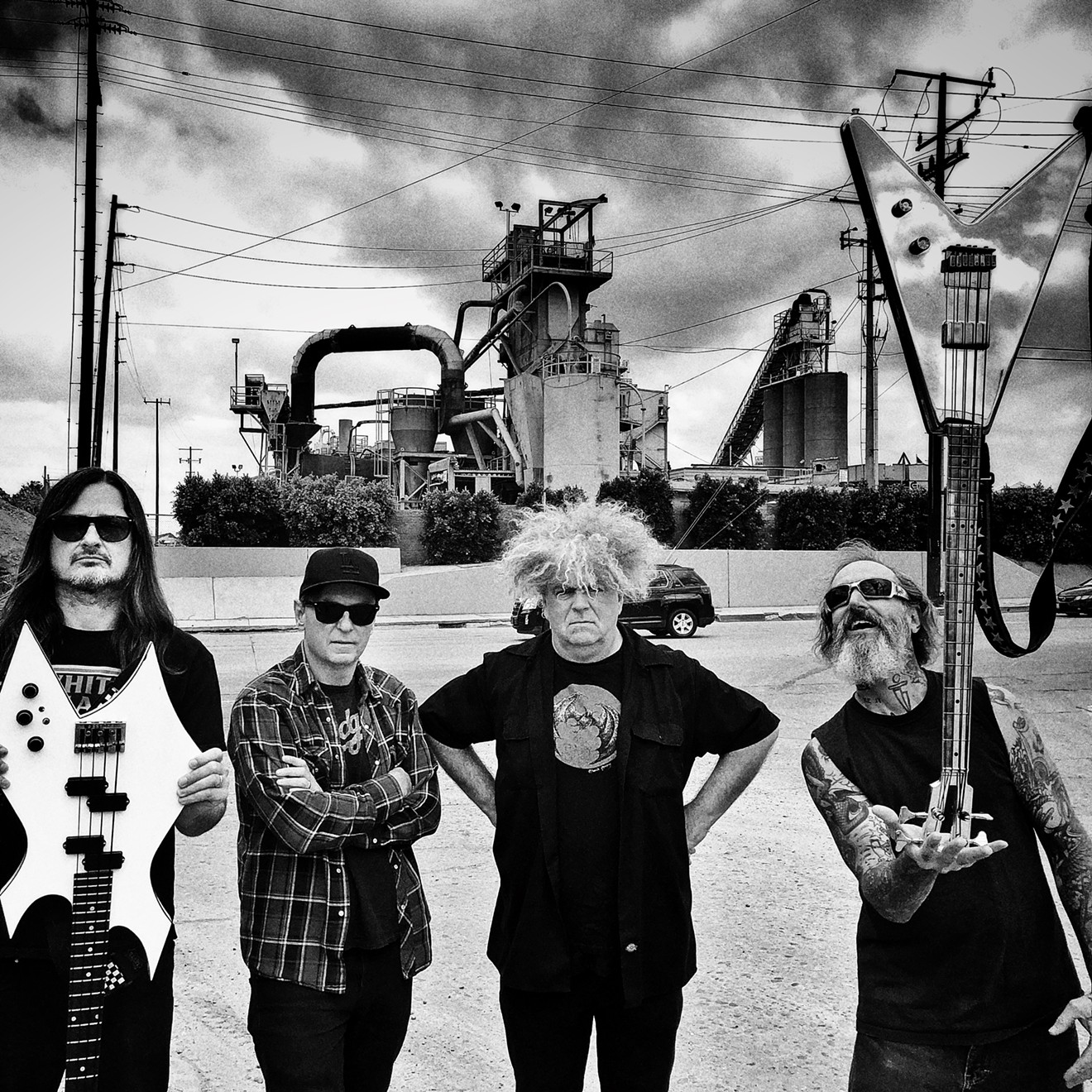 Left to right: Steven McDonald, Dale Crover, Buzz Osborne and Jeff Pinkus. O
Over a prolific and influential career, The Melvins have built a tremendous reputation for pushing the envelope and keeping things interesting. The band's most recent twist is laid bare in the new album Pinkus Abortion Technician — released this past April on Ipecac Recordings — which includes two bassists: Jeff Pinkus of Butthole Surfers fame and Steven McDonald of OFF!/Red Kross.

The band's 27th studio release gleans its title and cover art inspiration from the Butthole Surfers' 1987 classic Locust Abortion Technician and plays out just as strangely and unexpectedly as you'd hope for any Melvins release, especially one with such significant representation at the low end.

Seasoned Melvins fans will be familiar with both bassists. McDonald has served as the band's “regular” bass player of late, and Pinkus has toured extensively with the band over the last handful of years. The band's August 10 performance at the Gothic Theatre will mark the first time the two have taken the stage together in Denver.

We snagged guitarist and vocalist Buzz Osborne for a quick chat as the band rallied across the Canadian interior, heading into the final dates of its North American summer tour in support of the new album.

Westword: How has this tour been going, bringing the dual bass attack to a live stage? How has it been received?

Buzz Osborne:The double bass player thing is going well. Jeff and Steven are good players and easy to deal with. They don't cause a lot of problems. It's all been fun, and I'm happy to do it. We're in Canada right now. One more show here, and then we will be headed in your direction.

The 2016 Basses Loaded album features six different players, but just one on each track. How does the recording process change when you have two bassists on each track? Does it change the way you arrange or — speaking to the originals on this new album — the way you write them?

Is it similar to someone playing more of a rhythm track and someone taking the lead?

No, I think they left the rhythm up to me and did stuff that was more melodic, I would say. That makes more sense as to what they did on this record.

It's a pretty original take for a record, so I was curious if that changed your process or how you approached the record?

Yeah, it certainly did. Hopefully we can do more of it in the future and explore some more territory.

When it comes to the covers on the album, the idea behind the inclusion of the Butthole Surfers covers seems obvious. How did you decide on the two other covers on the record — The Beatles' “I Want to Hold Your Hand” and “Stop,” written by Jerry Ragovoy and Mort Shuman, popularized by the James Gang on its 1969 release Yer' Album.

I always wanted to do “Stop” in the James Gang style even though they didn't write it. And the Beatles one we had been covering for a while and just decided to do it with these guys. We'd played it live on a tour before with Steven, and it was fresh in our minds.

I've seen a couple around. How many cover variations for the new album are there?

On the Ipecac cover, the phrase, " Goddam right I am a service dog" is written on the dog's jacket. Why'd you choose that phrase?

We just thought it was funny: Give a dog a job to do. The service dog thing has gone a little far at this point I think.

During some pre-interview digging I read that Gene Simmons actually joined the band on stage once to play your cover of Kiss's “Goin' Blind”.

Are you able to pick one exceptionally unusual or unexpected musician or guest who has played a set or even a song with the Melvins over the years?

We recently joined Cheap Trick on stage in Kansas City. But we played one of their songs, “Surrender,” of course. The whole band joined in. It was great. That was pretty memorable.

You play Denver fairly regularly. What keeps you coming back?

We've been playing Denver since the late '80s. It's a city that's always been very receptive to what we are doing. It's a major stop for us on any tour, so of course we would play there. It's very special to us.

Can you hint at what fans can expect to see in Denver on August 10?

It will be a lot different than what they saw last time. Two bass players really add a lot. I think it is cool and think they will dig it. If they don't, there is nothing I can do about it, but it is definitely different for us.

And for the crowd as well. Many have seen the two drummer iteration of the band, or with two guitars, and now, two basses. Some new territory.

Yes. And I am playing with the Butthole Surfers' bass player and the Red Kross bass player, so it's very special.

Not just any two bass players.

No, not in the least.

The Melvins, 8:30 p.m. August 10, Gothic Theatre, 3263 South Broadway, Englewood, $25.75-$28.
KEEP WESTWORD FREE... Since we started Westword, it has been defined as the free, independent voice of Denver, and we'd like to keep it that way. With local media under siege, it's more important than ever for us to rally support behind funding our local journalism. You can help by participating in our "I Support" program, allowing us to keep offering readers access to our incisive coverage of local news, food and culture with no paywalls.
Make a one-time donation today for as little as $1.