Zanib Embraces the Power of the Mic 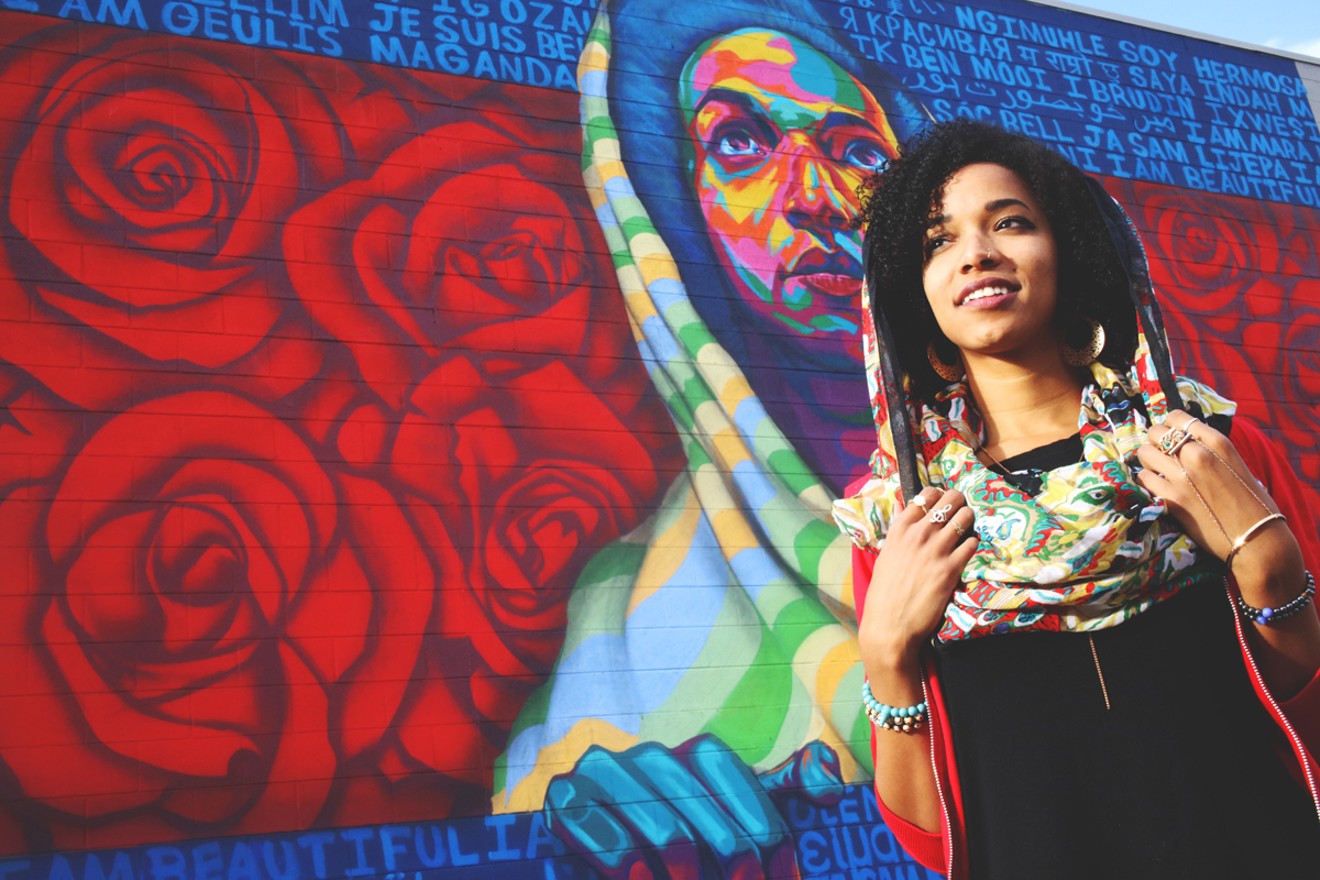 Tanya Salih plays contemporary soul music under the name Zanib. Thomas Evans
Tanya Salih has played the violin since the fourth grade, but she never planned to be a singer.

Salih grew up in Cheyenne, and often came to Denver on the weekends for concerts. After she graduated from the University of Wyoming in 2013, a friend invited her to play violin with him at a show at the Paramount Cafe in downtown Denver; in rehearsals, he discovered that she could sing and that their harmonies blended well.

“When I invited my friends and family to the show, they expected me to play violin, since that’s what I’ve been doing since fourth grade,” Salih explains. “We opened up the show with me singing, and the reaction was everything I needed to want to keep doing it.”

In 2015, she moved to the Mile High City and began performing contemporary soul music under the name Zanib.

Salih, whose parents are from the region where Egypt and Sudan meet, found it difficult to explore her Muslim heritage while growing up in Cheyenne, where her peers expressed little interest in her background — unless they were ridiculing it.

“It was hard to relate, because nobody knew and nobody cared to know,” Salih says. “They’d hear ‘Sudan’ and say, ‘What?’ It’s fine if you don’t know on a map; that’s whatever and common.” But Sudan has alternately been on and off (now on) the changing list of countries where President Donald Trump has imposed a travel ban. “Everyone should know the countries that are targeted,” she adds.

She recalls her high school peers mocking her full name, mispronouncing it and questioning what it meant.
Trying to build relationships with fellow students, she remembers saying, “‘Tell me a little bit more about your culture and teach me something.’ If you can’t teach me something or open my mind and tell me about something new, then either accept what I’m telling you and open up your mind, or don’t waste my time.”

Over the years, Salih has come to embrace her background, and she hopes to use her music as a platform to educate others about Muslims and immigrants in the United States. Her hope is that performing as Zanib will spark conversations about where she is from. 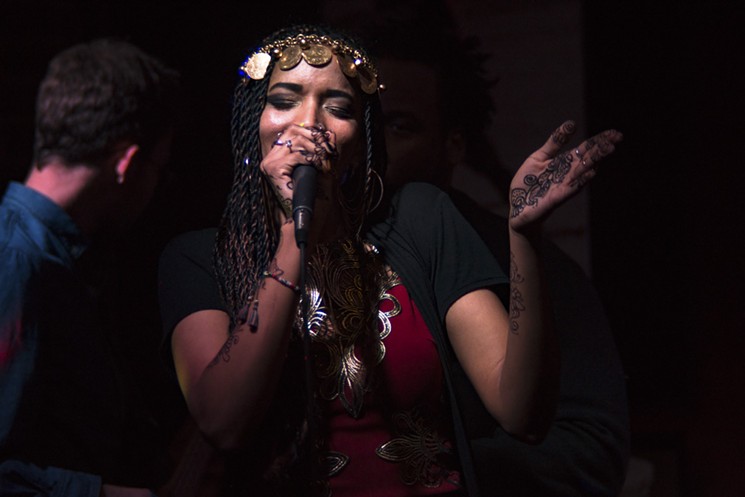 Zanib
Tyler Beechum
“I’m done diluting and letting all that shade come onto who I truly am,” Salih explains. “I don’t want to be seen through someone’s lens, the way they want to see. I want to be seen based on my being, not your perspective.”
Salih is following in the footsteps of her father, Dr. Mohamed Salih, an imam and an activist himself, who taught her about the power of education. She grew up listening to his lectures at the mosque and admired his ability to calmly speak from a place of knowledge rather than opinion and provide perspective on how each individual in the community fits into the world at large.

“I’ve seen him speak at the Women’s March, Martin Luther King Day, the mosque, churches, synagogues, libraries for panels, African MAAFA and many more events,” Salih says. “He always finds a way to bring it to the fact that we must all live as compassionate humans regardless of our differences in beliefs, origins or who we are as individuals. He has a way of speaking to people that takes them to their heart and allows them to open up to new ideas and ways to innovate our communities and lifestyles.”

Similar to her father, Salih makes sure that each time she performs, she talks about important issues the world is facing. Whether it’s a mass shooting, government policy or something weighing heavy on her heart, she believes that it’s important to raise awareness.

“I found through the power of the microphone, no one can silence your voice when you are on stage,” Salih says. “So I try to remain as genuine, optimistic and loving as I can on stage, because that is what I want the people to give me and put out into the space as well.”

As she tells it, concerts are a conducive, powerful space for her message, as people are brought together by a shared interest in music. Zanib
Stevie Selby
“Our differences shrink the more we are able to realize we are sharing the same space, same sounds and same energy that could only be united in this particular time and place,” Salih says. “I always felt that way about music when I would see people from ages five to fifty at a show, people who were born in the United States and those who weren’t. Men, women — all walks of life can come together on the basis of a common passion for art.”

At the beginning of December, Salih released the album Salam, whose songs she had written over a transitional two-year period following her college graduation, culminating with her move to Denver in 2015. During that time, she was traveling, connecting with musicians and creating more than ever.

She describes her music’s sound as global and universal. Her songs reflect where she is in the world, mentally and emotionally. Some tracks incorporate Eastern sounds; on others she plays the ukulele or with a band. At most performances, it’s just her and her violin.

The songs on Salam aim to incorporate her cultural roots, including “Arabic names, words and sounds, so people could associate it with three very positive things: peace, which salam stands for; the beauty of artistic creation; and the unity that music brings around the world,” Salih explains. She also has begun listening to more tribal, Nubian music in the hopes of mixing some traditional sounds into her modern style. This way, she can better introduce her audience to Sudan’s indigenous Nubian culture.

She finds that now, as an artist, she listens to music with stronger intention. Since she wants to deliver a positive, empowering message and writes lyrics to reflect this, even familiar songs she loved growing up sound different.

“The other day a song came on that I used to listen to when I was younger, and I was rapping the words,” Salih says. “Then I realized the foul content of the lyrics and how I was just repeating them because I was so used to hearing it over and over. I catch that a lot in music these days, where people are mindlessly singing lyrics without realizing the negative effects it has on what they are consuming and putting back into the world.”

“As an artist, I am much more intentional with the content of the music, the feeling that it gives me and that I want to feel in that moment,” Salih adds. “I listen to it more as storytelling and trying to discover lived experiences rather than just some verses. It can be hard at times, because so much of mainstream music is centered around drugs, sex, violence and toxic content. I want my music to reflect the opposite view of all that. I want it to be positive, poetic, inspiring and everything that I consume as a listener, to reflect that as well.”