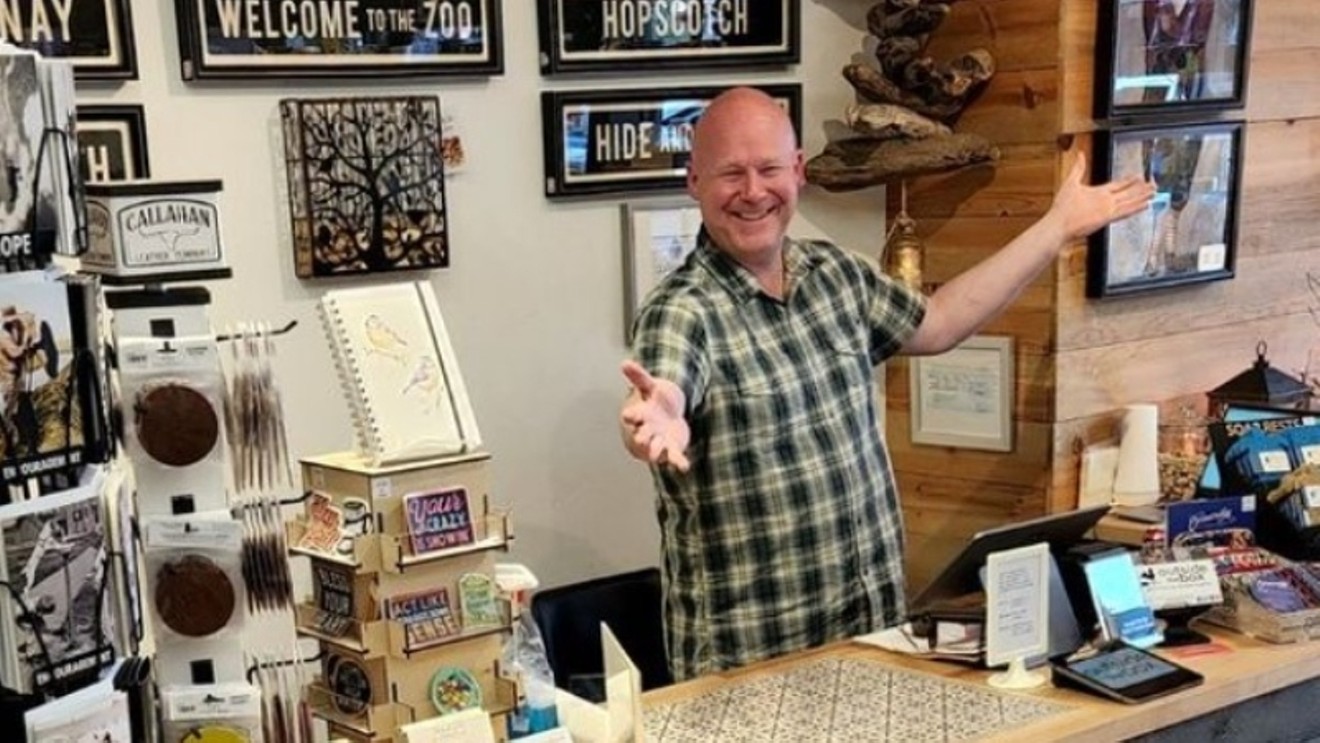 Chris Spears at his Olde Town Arvada store, Outside the Box. Courtesy of Chris Spears
For more than eight years, forecaster Chris Spears was a staple on CBS4 Denver, where he built up a considerable fan base with his ultra-accessible style and devotion to giving practical advice. "To me, a TV meteorologist is a customer-service giver," he says. "We offer a product and give it to you to meet your needs — and that product is information. That's how I treated my job."

Now he's got a different job. Last month, Spears signed off at CBS4 Denver for the last time, leaving the station to devote himself full-time to Outside the Box, a store at 5760 Olde Wadsworth Boulevard in Arvada devoted to décor for the home and garden that he owns with partner Dorn Nienaber. And he couldn't be more pleased. As he wrote in a Facebook post about his new life shared yesterday, October 25, "I wake up happy and go to bed happy...EVERY SINGLE DAY!"

Spears is among a rapidly growing number of local on-air TV personalities who've left their gigs, and often the profession, over recent years. At least sixteen Fox31/Channel 2 stars have moved on since early 2021, including Natalie Tysdal, Sam Boik, Matt Makens, Kevin Torres, Michael Konopasek and Aimee Lewis, who created a podcast that's a devastating takedown of the broadcast-news industry. And other stations haven't been immune from such exits: Liz Kotalik, Ryan Haarer and Becky Ditchfield split from 9News, and CBS4 Denver's Jim Benemann has announced his plans to retire at year's end.

Even so, Spears says that his decision to leave his "dream job" wasn't easy.

"I grew up in Arkansas. I was basically at my grandparents' house all the time, and when the Weather Channel came out in 1982, they watched it nonstop — and so I did, too," he recalls. "Honestly, my grandma really fostered the weather passion in me. We watched that channel from sunup to sundown, and she'd get me posterboard to make maps. That's where it all started."

The journey to his debut before the cameras was a long one. Spears calls himself a "nontraditional college student" thanks to educational stints in Arkansas and Minnesota that preceded the completion of a meteorology degree at Metropolitan State University of Denver, where he's now a faculty member; he's taught an intro-to-meteorology course at Metro for nine years. In addition, he handled products for Calvin Klein and Pandora jewelry, sold radio advertising and served as an assistant to Denver weather legend Mike Nelson at both 9News and Denver7 before being hired by CBS4 Denver at age 36.

"Most people don't start their TV career in Denver," he acknowledges. "Fortunately, I did." 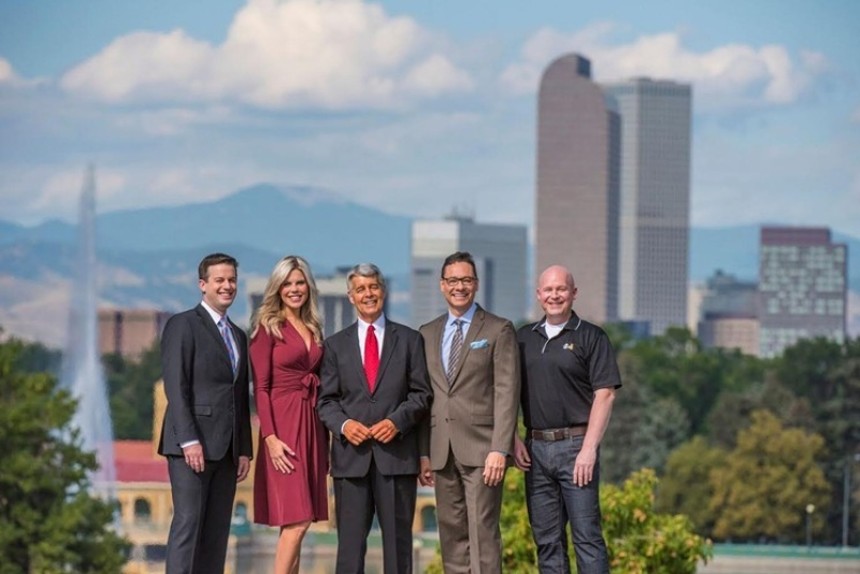 Chris Spears, right, with former CBS4 Denver colleagues Ashton Altieri, Lauren Whitney, Ed Greene and Dave Aguilera.
Photo by Evan Semón courtesy of CBS4 Denver
Over the years that followed, Spears prognosticated in many different time slots, including mornings and weekends, but always with a concentration on transparency.

"I took it very personally if the forecast I gave was wrong, because I knew somebody had counted on me when they made their plans that day," he says. "I also believe that when you deliver a forecast, you don't just say, 'Cloudy with a 30 percent chance of rain, high of 80.' I'd always try to give a range of possibilities — like, 'This is a tricky one. If you're making outdoor plans, you need to constantly check back, because this could change.' I tried to make things human-to-human, conversational, and if I had doubts, I'd let you know it."

He adds: "I think some meteorologists are a little too confident in their forecasts, and when it doesn't happen the way they said, the public doesn't understand, and they feel like they didn't get good information. So my goal was always to give you a range of possibilities if that's what the message needed to be."

He offered a prime example of this philosophy in April 2019, when Spears's peers were falling all over themselves hyping what was dubbed Denver Bomb Cyclone II. Practically the only voice of sanity prior to what turned out to be a fairly minor spring storm was Spears, who tweeted, "Ok y’all I keep seeing and hearing #bombcyclone2019 thrown around. I know it’s sexy and all, but this isn’t quite that this time though extremely strong. Let’s call this one the ugly 3rd cousin from mama’s side of the family."

Being right wasn't making him rich, though. "Television has certainly changed over the years," he confirms. "It's like any other business: You need to do more with less. The salaries are lower, and the days of long-term, high-dollar contracts are gone unless you're at the network level or perhaps the main anchor of a show. And it's not as glamorous as people think. Sometimes we get special access to sporting events or concerts, but it's not like the good old days in the '80s and '90s. With cell phones and streaming and everything on-demand, the TV business is having to fight to survive, and sometimes the people aren't always treated the way they should be treated." 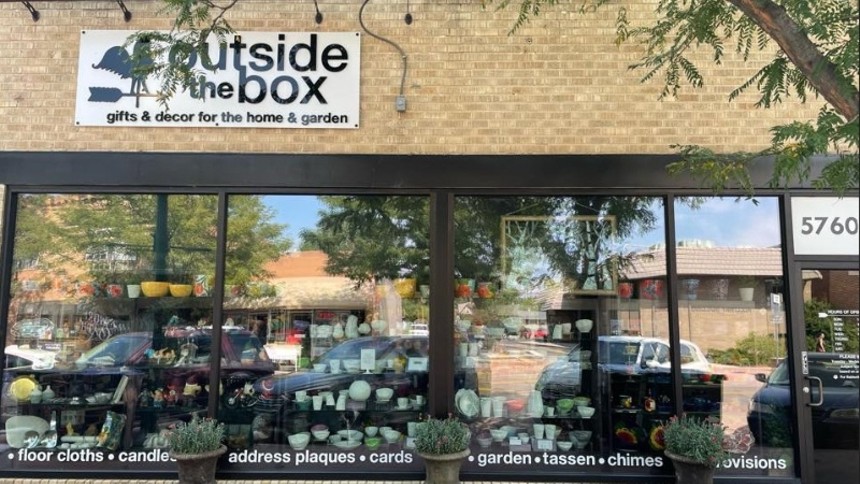 Outside the Box is located at 5760 Olde Wadsworth Boulevard.
Courtesy of Chris Spears
Given these new realities, Spears launched a side hustle. Over the past five years, he and Nienaber opened a number of booths at sites such as the Maker's Market at Southwest Plaza, selling the sort of items that now dominate the stock at Outside the Box, which opened its doors in April. The success of these enterprises rose at a time when Spears was growing more frustrated with what was happening at CBS4 Denver.

"Over the last eighteen months or so, certain decisions were made with regard to scheduling that I didn't agree with," he says. "And with my business with Dorn doing so well, and approaching what is going to be our very first Christmas on our own in retail, the decision was clear: I needed to shift my attention and my focus elsewhere to benefit me, my life and my family."

While Spears stresses that he bears no ill will toward anyone at CBS4 Denver, he's also regret-free about the choice he made — and he's having a great time running Outside the Box. "Twice a year, we go to different markets around the country, sourcing and seeking out items that are unique — things that you probably haven't seen or will not see in many gift shops," he says. "We work hard to have all price points, from under five dollars to $500, and to offer a wide variety of stuff. And we love having a relationship with our customers. We have a sign on the door that says 'Fur Babies are Welcome,' because when people come in with their dogs, they get a dog treat. Some of them joke that they can't walk past our store anymore without their dog bringing them in to get a treat. We always have candles burning, so the store smells amazing, and we play upbeat, fun, jazzy music. It's an atmosphere, an experience, which we work at every day."

Given his position at Metro, weather remains a part of his life: "I still pull up maps and do forecasts each day in class," Spears says. But he also provides a more personal service.

"A surprising number of former viewers come in, and when they recognize me, they'll jokingly ask me for a forecast," he concludes. "And I tell them, 'Come in anytime. I'll be happy to give a forecast just for you.'"
KEEP WESTWORD FREE... Since we started Westword, it has been defined as the free, independent voice of Denver, and we'd like to keep it that way. With local media under siege, it's more important than ever for us to rally support behind funding our local journalism. You can help by participating in our "I Support" program, allowing us to keep offering readers access to our incisive coverage of local news, food and culture with no paywalls.
Make a one-time donation today for as little as $1.