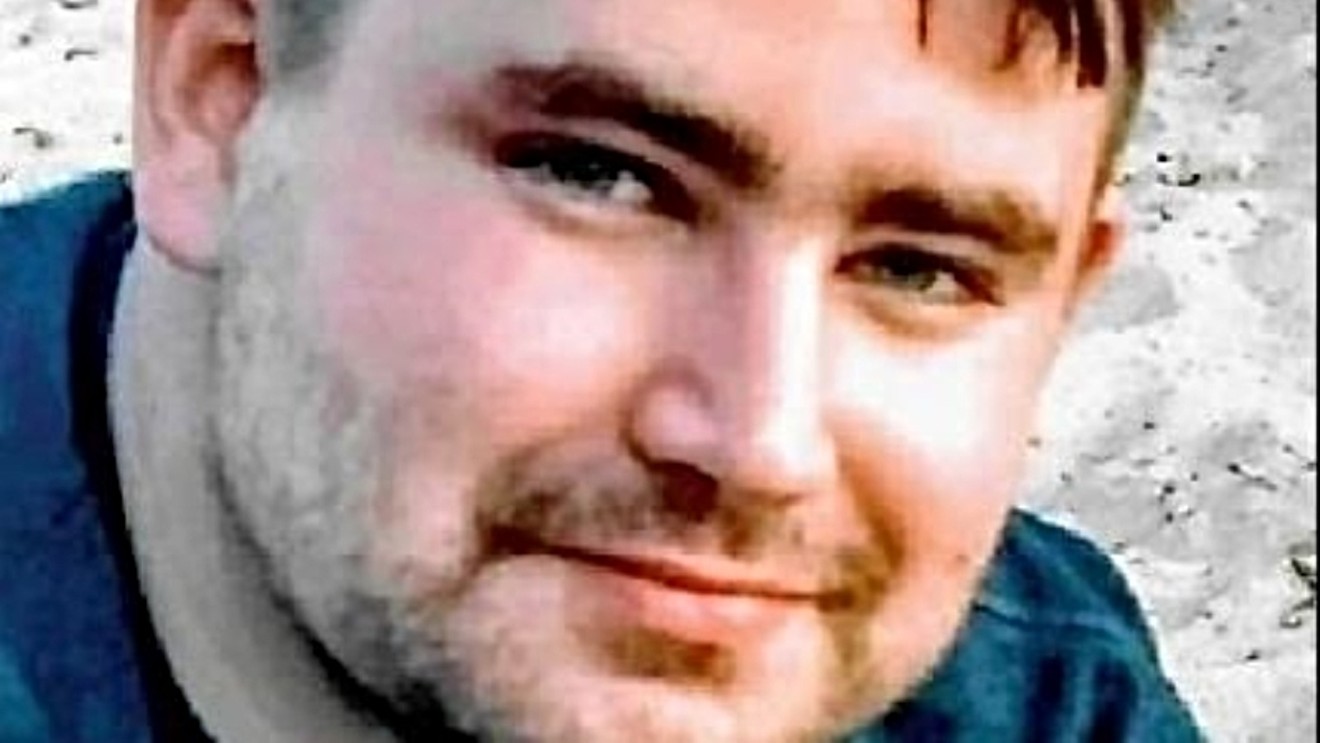 A photo of the late Christopher Eyer. Family photo via obits.masslive.com
At around 10:35 p.m. on August 20, Christopher Eyer was fatally stabbed on the 700 block of Arapahoe Avenue in Boulder. The death of Eyer, a thirty-year-old resident of Jamaica Plain, Massachusetts, prompted extensive media coverage in New England; he'd worked at the Massachusetts Institute of Technology, one of America's most renowned educational and research facilities, which released a statement mourning his passing.

But on October 4, the inquiry into the Eyer homicide took a bizarre twist. According to the Boulder Police Department, its probe tied Eyer to three violent episodes prior to a final confrontation with two men in which he's believed to have been the aggressor. As a result, BPD investigators have concluded that the stabbing of Eyer was an act of self-defense.

The portrait of Eyer provided by his online obituary, tied to a funeral that took place on September 11, presents an enormous contrast with his alleged behavior in Boulder. The narrative notes that he graduated with honors from Springfield Central High School before his entry into Boston's Emerson College, where he earned cum laude recognition in the fields of writing, literature and publishing. He also served as sports editor and business editor of the Berkeley Beacon newspaper before landing a gig as assistant acquisitions editor at MIT Press prior to a gig as operations and data manager for MIT Sloan. In addition, he freelanced as an editor and was taking classes at Boston University.

"Chris had many interests," the obit notes. "He loved any and all sports, cooking and trying new cuisines wherever he travelled. Chris enjoyed the yearly family vacations at Hawk Nest Beach. Most of all, Chris loved spending time with his friends in Boston and Springfield, and the honor of officiating several of their weddings. Chris’s wit and humor brought so much joy and laughter to so many. He will be deeply missed. It was evident to all who knew him that Chris wanted to make the world a better place."

The MIT statement about his death reads: "We are saddened to confirm that Christopher Eyer, an employee at the MIT Sloan School of Management, died in Boulder, CO on Friday, August 20th. He will be remembered as a valued colleague and friend. We extend our deepest condolences to Chris’s family and those close to him."

Initial reports about the stabbing offered few details beyond pointing out that Eyer had been seen on 9th Street between Pearl and Arapahoe an hour or so before the stabbing. He was said to have been wearing a suit jacket, pants and a white button-down shirt.

The Boulder Police announcement, issued late yesterday afternoon, provided many more details. It states that Eyer "had become involved in a verbal exchange with two adult males — whom he did not know — as they were walking downtown near 9th and Arapahoe." But the incident went beyond words "when Eyer attacked them."

The men fled to their apartment, which was located nearby, but Eyer reportedly caught up with them as they were trying to get through the door. A physical fight followed, during which one of the men stabbed Eyer with a small knife. "During their voluntary interviews, both males said it was self-defense," the release stresses. "One of them was treated at the hospital for their injuries."

Who initiated these actions? "Based on the investigation, detectives believe this individual was Eyer," the BPD concludes.

The two men involved in the stabbing are not yet off the hook. The case has been handed over to prosecutors with the Boulder District Attorney's Office, who are expected to announce within the next couple of weeks whether either or both of the two other men will face criminal charges. But the BPD points out that "under the law, an actor may use deadly force if the 'actor had reasonable ground to believe, and does believe, that he or another person is in imminent danger of being killed or of receiving great bodily injury.'"

The original version of this post included a photo of a Denver7 employee incorrectly identified as Christopher Eyer; the photo has been removed. We regret the error.
KEEP WESTWORD FREE... Since we started Westword, it has been defined as the free, independent voice of Denver, and we'd like to keep it that way. With local media under siege, it's more important than ever for us to rally support behind funding our local journalism. You can help by participating in our "I Support" program, allowing us to keep offering readers access to our incisive coverage of local news, food and culture with no paywalls.
Make a one-time donation today for as little as $1.