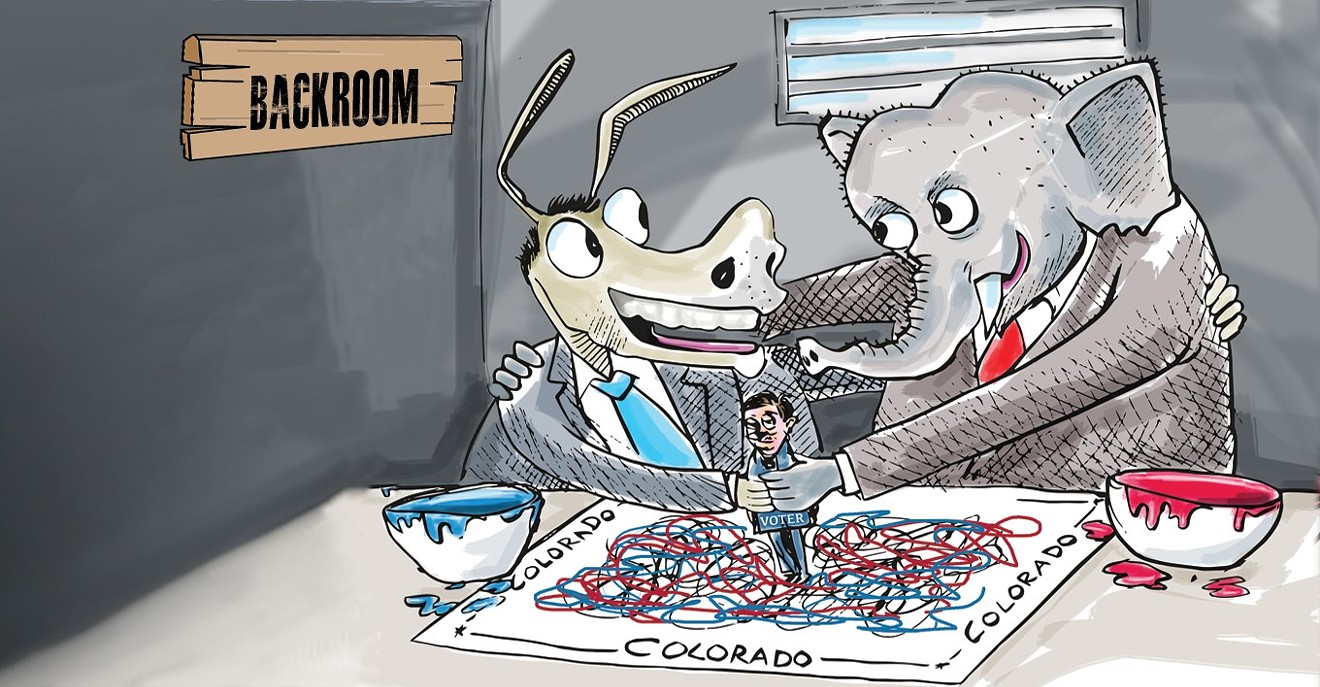 Courtesy of Fair Districts Colorado
After two coalitions went to battle over the future of the state's political landscape, it seems as though the end is near, with one camp having both time and momentum on its side.

On Friday, February 2, Fair Districts Colorado's three latest ballot initiatives were affirmed by the Colorado Supreme Court after a nearly two-month court battle with a loose coalition calling itself People Not Politicians. Any day now, petitioners with Fair Districts Colorado could begin knocking on doors and collecting signatures to install an independent commission for congressional and state redistricting that just might put an end to gerrymandering.

"It'll have to be sooner rather than later," says Toni Larson, executive director of the League of Women Voters of Colorado, with regard to when petitions will begin circulating. The league is a coalition partner of Fair Districts Colorado, and Larson is listed with the state as a representative of Fair District Colorado's ballot initiatives.

People Not Politicians even proposed its own ballot initiatives to the Secretary of State Title Board, but it's lagging behind. The group's initiatives are scheduled for a re-hearing today, February 7, though an appeal could delay them from moving forward.

"We don't have anything to report right now," said Robert DuRay, who's representing People Not Politician's counter ballot initiative, in an email to Westword yesterday. "We are in front of [the] Title Board tomorrow and should have more of an update after. For now, it's full-steam ahead." DuRay is also the chairman of New Era Colorado Foundation, a nonpartisan organization aimed at bringing more young people into the political fold (his work on the initiative is unrelated to the nonprofit).

"We're in agreement that we want to get rid of gerrymandering. ... There are several things that we do agree on. There's some conversation on minority parties versus purely unaffiliated [voters serving on the commission]," Larson says. "They're sticking points, but they're not deal-breakers.”

Petitioners have to gather 98,492 valid signatures for each petition. (Groups usually collect tens of thousands more signatures than that as a buffer against the state's validation process, which tends to disqualify at least one-quarter of all gathered signatures.)

Fair Districts Colorado has to overcome an even greater hurdle this year. Since voters approved the Raise the Bar amendment in 2016, constitutional amendments have to collect signatures from at least 2 percent of registered voters in each of the state's 35 Senate districts.

With the help of the Centrist Project, the League of Women Voters of Colorado and the endorsements of more than a dozen former state elected officials, Fair Districts Colorado is confident it can mobilize people across the state. Most recently, the campaign garnered major support from organizations like Progressive 12 and Action 22, advocacy groups representing northeastern and southern Colorado, respectively.  According to its latest campaign contributions report, its single-largest donor was Noble Energy, which donated $25,000. Last quarter, total contributions equaled $26,025.

"We do have leagues in several different places in Colorado — local leagues — and we’re hoping some of them will help us gather signatures and organize campaigns in their areas," Larson says.

On the surface, both campaigns want the same thing: an independent commission for state and congressional redistricting that gives equal weight to the voices of unaffiliated voters to replace a broken system.

The existing process is rife with underhanded partisan maneuvering. Every decade following the release of the Census, an eleven-member commission is appointed by political party leaders and the chief justice of the Colorado Supreme Court. Historically, the party in power stacks the commission with loyalists, which have included sitting state elected officials, in order to out-vote the opposing party with a simple 6-5 majority and rubber-stamp their own state legislative maps. And, of course, the General Assembly fights over congressional district maps. Since 2000, the state has been unable to approve any maps, legislative or congressional, without a decision from the Colorado Supreme Court.

With so much at stake, organizations are getting a jump on the issue before the 2022 elections by installing a commission that would draw maps for state and congressional elections. But the devil is in the details when it comes to the question of who can create the most independent process.

Both sides call for twelve-member independent commissions — one for congressional and the other for state legislative redistricting — each evenly composed of Democrats, Republicans and independents. Both include competitive districts as a factor in redistricting. Both would require the vote of a supermajority — including at least one unaffiliated voter. Both prohibit incumbents and political candidates from serving on either commission. Both subject the commissions to state open-records laws and require financial disclosures for lobbyists. But Fair Districts Colorado and People Not Politicians part ways on a few details.

Here are the differences between the two camps: