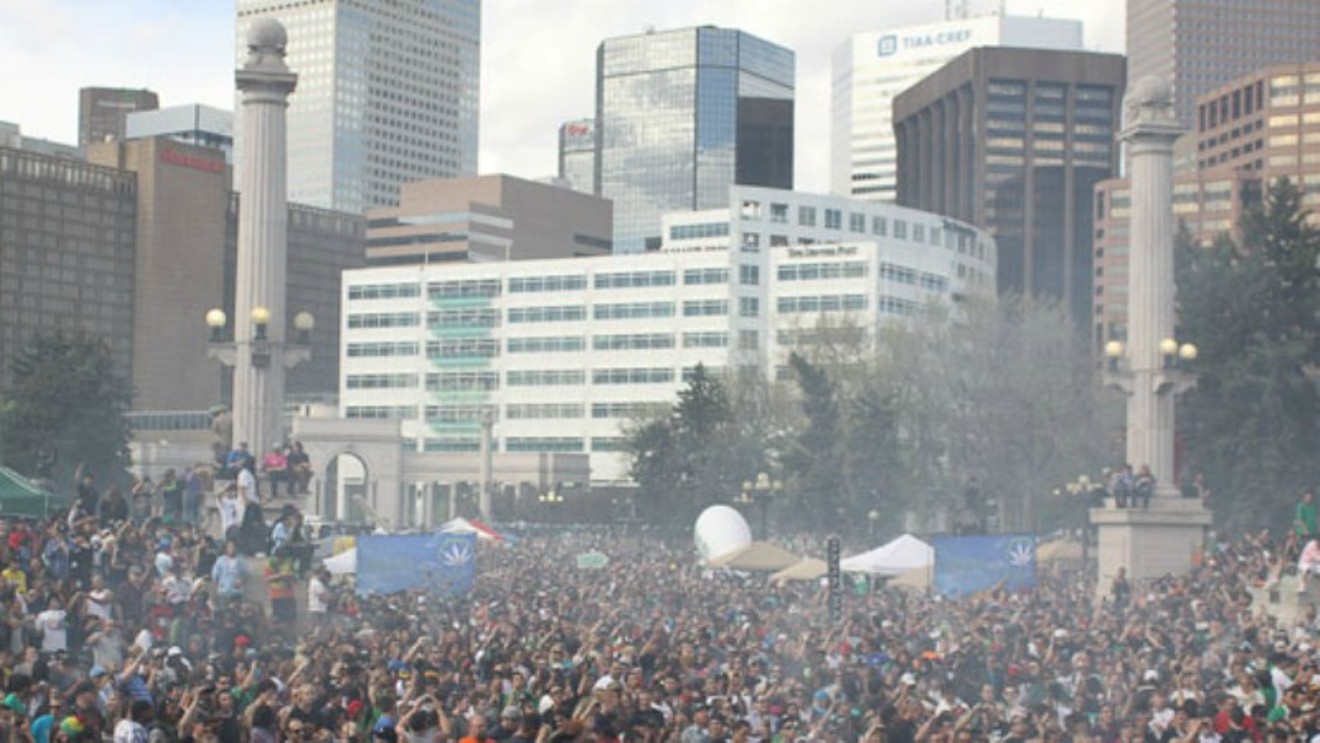 Denver 420 Rally attorney Rob Corry wonders if the smoke cloud over the event has driven city officials crazy. Photo by William Breathes
This afternoon, organizers of the Denver 420 Rally will formally file an appeal of a decision by the City of Denver to prohibit them from applying for any event permit during the next three years and rescind the priority status that's allowed them to regularly stage the annual gathering at Civic Center Park on or around April 20.

The letter is on view below.

According to rally attorney Rob Corry, the officials who ordered the ban, which followed complaints about trash at the park the morning after the get-together, have trumped up trivial matters in an arbitrary, unconstitutional way that suggests a bad reaction to the smoke plume that rose over the park at 4:20 p.m. on the day of this year's event.

"It is difficult to imagine how the City can view negatively a peaceful event that provides a free concert to the public with Grammy-winning entertainment, brings tourists, jobs and revenue to Denver, that cleans up after itself and provides education and prompts thousands of insightful conversations," Corry writes via e-mail. "But then again, we are also talking about marijuana, the idea or mere sight of the cloud of which can cause otherwise sane government officials to become crazy."

The organizers' filing includes a basic history of 4/20 events before focusing on the Denver rally. One key incident it cites is a still-unsolved shooting during the 2013 gathering that the city allegedly used as a pretext to force organizers to put up and pay for fencing around the perimeter of Civic Center Park, as well as to fund the search and screening of every attendee in a crowd that regularly hits 50,000. Rob Corry and Denver 420 Rally permit-holder Miguel Lopez.
Photo by Michael Roberts
To meet these requirements, as well as to bring in national talent such as Lil Wayne, Wiz Khalifa, Rick Ross and 2 Chainz, the most recent headliner, the organizers have spent an estimated $2 million to put on the free event.

These efforts don't appear to have made Denver officials any more sympathetic to the rally, and the appeal suggests that the city's notice letter lacked supporting details, such as the identity of officials and police officers supplying negative accounts, times of allegations, copies of police reports or any other standard documentation.

The complaints are said to be part of a negative public-relations strategy intended to unfairly vilify the event.

An excerpt from the letter reads: "The 420 Rally is singled out improperly because of the City and County’s
hostility and animus against our message; our taste in music, culture, and art; our participants; our organizational leadership and their history of political activism; and because of actions of third parties, who generate the legendary 'cloud of smoke' every year, but who are persons unaffiliated with the Rally’s leadership and organization."

From there, the document attacks the ban point by point. In a section about constitutional concerns, Corry and company accuse the city of acting as if the First Amendment protection of freedom of speech and assembly, as well as the Fourteenth Amendment's equal protection clause, somehow don't apply. Rob Corry.
Photo by Michael Roberts
A subsequent section about noise begins like so: "The City concedes in its letter that throughout the event, all noise levels were within Denver’s noise ordinance." And in regard to gripes about garbage, the appeal denies that the organizers did anything wrong.

"The Park was 100 percent cleaned up. Within the City’s allotted time. Period. No violation," the letter states.

Denver's assertions about safety are also disputed. "Bottom line on security: no incidents, no violence, no injuries. 50,000 attendees. An outdoor free concert with award-winning talent. This can form no violation, and certainly not a 'substantial' one," the appeal allows.

As for alleged health violations involving eight booths that were allegedly unlicensed, the appeal argues that the laws relating to CBD vendors are murky and unsettled, and Denver has no specific requirements. Moreover, no one was harmed as a result of any related issues, which are characterized as hyper-technical. The same logic is applied to other supposed violations of city code, which are supported by photos lacking time stamps and evidence the organizers find eminently debatable.

The appeal emphasizes that the folks behind the Denver 420 Rally don't want to take part in a pro forma teleconference to hash out these differences. Rather, they're requesting an actual hearing, with all witnesses testifying in person, on the record, and identified by name.

In summing up the organizers' counterclaims, Corry notes that "our appeal makes clear that the petty and technical nature of the City’s alleged violations, and lack of specific documentation therefore, cannot result in the harshest sanction possible, a three-year ban and loss of status. The City will eventually be forced to prove its case, and the 420 Rally looks forward to that day and to our ultimate vindication."

He adds that "our middle finger salute to authority is well within the traditions and founding of the United States of America itself, and is protected speech under her laws."