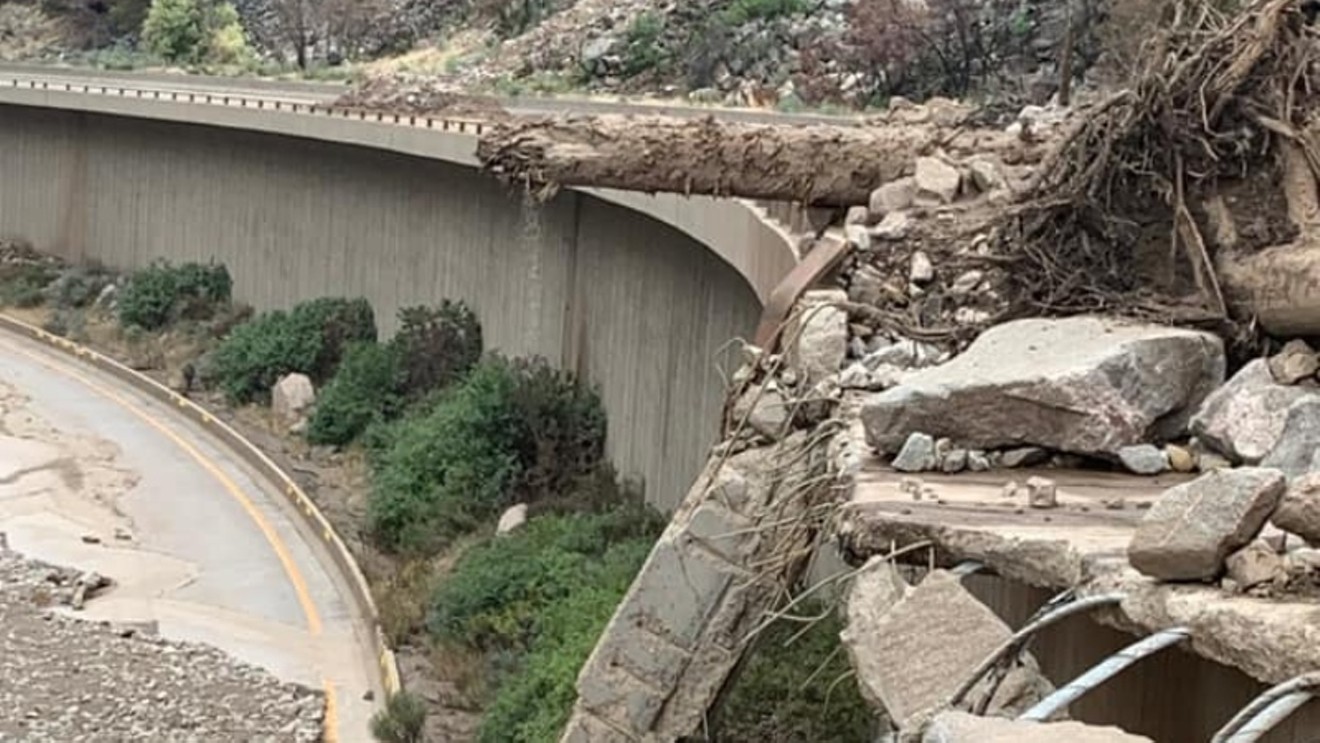 A CDOT photo showing extensive damage to Interstate 70 through Glenwood Canyon. Colorado Department of Transportation
The ugly fallout from mudslides that have again closed Interstate 70 through Glenwood Canyon is likely to continue for weeks to come. On August 2, Governor Jared Polis announced that he'll soon formally declare one of Colorado's most gorgeous sections of roadway a disaster, and drone footage released by the Colorado Department of Transportation vividly shows the extent of damage that officials are calling unprecedented.

"The state, local and federal authorities are working to clear debris from the canyon as quickly and safely as possible," Polis said at a press conference called to discuss the situation. "We are also readying a state disaster declaration and a request for a federal declaration with the Biden administration. Glenwood Canyon is majestic, but its majestic nature makes for challenges when it comes to infrastructure, especially in the face of catastrophic climate change affecting states across the West. We have extensive damage to I-70 in multiple locations in Glenwood Canyon, and the monsoon weather pattern means this threat is ongoing."

According to CDOT director Shoshana Lew, the agency "is focused on two immediate areas of concern: removing debris so that we can scope the needs for permanent repairs and focusing on sections of the viaduct structures where the parapet and scallop walls have been destroyed. Beyond these immediate priorities CDOT’s operational concerns include establishing safe westbound passage through the canyon for CDOT staff, the Shoshone power plant dam, and Xcel. Reestablishing consistent power will be necessary for CDOT operations staff to resume normal operations of the Hanging Lake Tunnel complex. Given the extensive damage to some areas, it will be some time before traffic can move in the manner it normally would."

This CDOT video was taken on August 1:


Precipitation in the western half of Colorado has been extremely fickle. Many areas are suffering drought conditions, and the Blue Mesa Reservoir off U.S. 50, one of several alternative east-west routes seeing much greater traffic volume than usual as a result of the Glenwood Canyon closure, is so low that several boat ramps had to be closed in recent days.

In contrast, Glenwood Canyon saw four inches of rainfall over a five-day period — nearly double its 2.4-inch average for the entire month of July. This has proven particularly problematic along the burn scar from last year's Grizzly Creek fire, leading to Polis's efforts to ready a state disaster declaration and a request for a federal declaration under the Stafford Act.


Click here for information about alternative routes around Glenwood Canyon — which will be necessary for the foreseeable future.
KEEP WESTWORD FREE... Since we started Westword, it has been defined as the free, independent voice of Denver, and we'd like to keep it that way. With local media under siege, it's more important than ever for us to rally support behind funding our local journalism. You can help by participating in our "I Support" program, allowing us to keep offering readers access to our incisive coverage of local news, food and culture with no paywalls.
Make a one-time donation today for as little as $1.