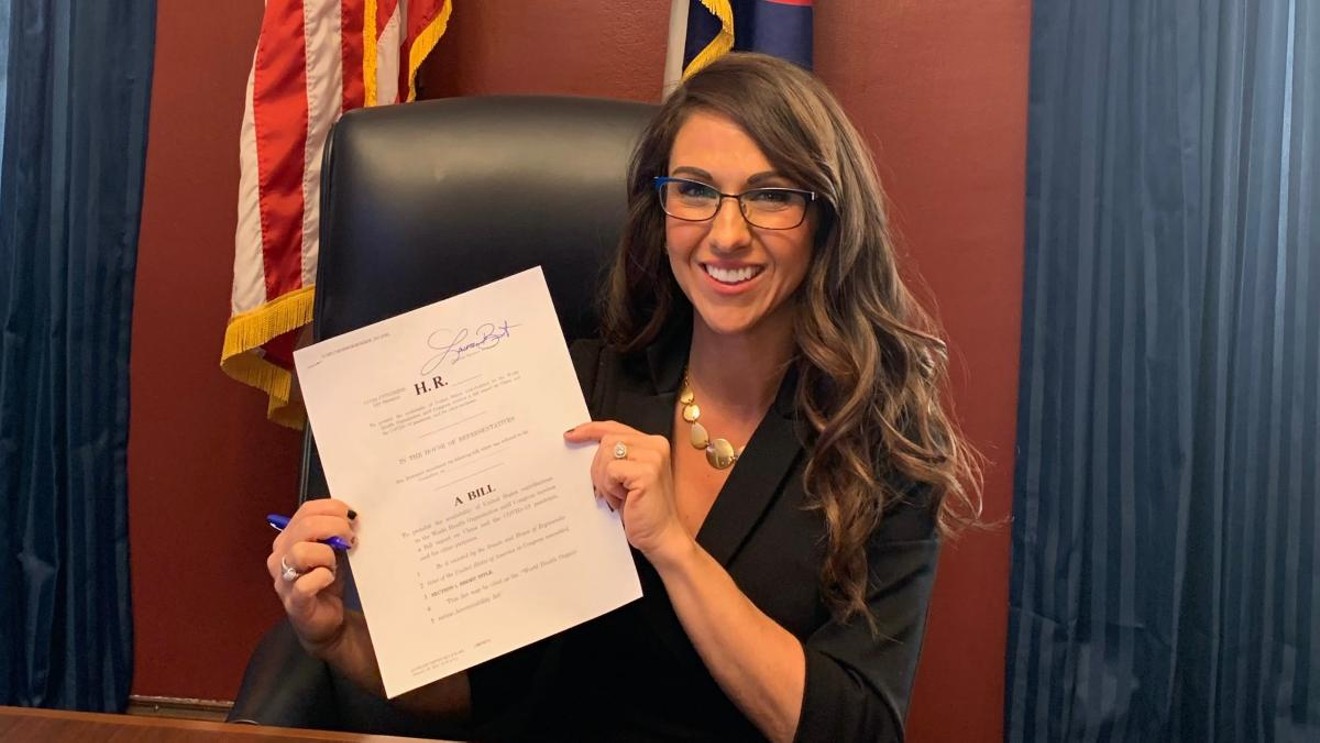 Representative Lauren Boebert holding her bill concerning the World Health Organization and China. boebert.house.gov
Lauren Boebert spent her first days as the representative for Colorado's 3rd Congressional District fending off calls for her to resign or be expelled because of her alleged incitement of the mob that attacked the U.S. Capitol on January 6 (charges she energetically denies), refusing to let her bag be searched by cops stationed at a metal detector at the entrance to House chambers, and dealing with a First Amendment lawsuit filed by a critic she blocked on Twitter. But she's now issued a flurry of new legislation apparently designed to block the agenda of President Joe Biden and continue the legacy of Donald Trump.

Her targets include masks, China and the Paris climate pact.

During previous interviews, Boebert emphasized her compliance with COVID-19 health directives following her decision to reopen her Rifle eatery, Shooters Grill, during a period when in-restaurant dining was off-limits in the state. But rallies during her campaign, including a July 4 weekend pro-gun get-together in Grand Junction, were mostly mask-free affairs.

It's no surprise, then, that Boebert is going after what she describes as Biden's "mask mandate" — a just-signed order requiring the use of facial coverings on federal properties and at federal buildings. Her proposed bill fighting the edict is one sentence long: "Notwithstanding any other provision of law, no person may be required to wear a face covering on Federal property or while traveling in interstate commerce."

Boebert's explanation of the measure is longer: "You can’t make this stuff up. Joe Biden was on federal land without a mask the same day he signed a federal property mask mandate. Sadly, this is what we’ve come to expect from hypocritical Democrats. 'Mandates for thee, but not for me.'...The Biden administration is already headed in the wrong direction. Instead of focusing on reopening our economy and getting Americans back to work, this president wants more mandates and more lockdowns. Continued federal overreach won’t end the COVID-19 pandemic or put food on the table."

In remarks justifying this measure, Boebert offers a resolutely Trumpian take on the organization: "The WHO is China-centric and panders to Beijing at every turn. There is no reason U.S. taxpayers should contribute more than $400 million annually to an organization that covered for China and failed to contain the spread of COVID-19 pandemic. We must not let the Chinese Communist Party off the hook. We must hold the WHO accountable. Joe Biden failed to do either of those things and his edict yesterday only emboldens Beijing. Rejoining the WHO without ensuring accountability for the American people is the wrong move."

As for the climate accord, Boebert's "Paris Agreement Constitutional Treaty Act" seizes on the fact that the U.S. Senate under then-Majority Leader and fellow obstructionist Mitch McConnell never ratified the accord. The key passage: "No action may be taken to carry out the goals of the Paris Agreement, including any action, agenda, agreement, platform, or plan, unless the Senate first adopts a resolution of advice and consent to ratification of the Paris Agreement."

As Boebert explains it: "My bill prohibits Congress from spending a single penny on the Paris Agreement until this treaty is ratified by the United States Senate. Joe Biden took an oath to uphold the U.S. Constitution. If he wants to keep it, he must transmit the job-killing Paris Agreement to the U.S. Senate for ratification. Unilaterally entering the Paris Agreement was wrong in 2016 and it's wrong now. Responsible energy production supports more than 230,000 Colorado jobs. The Paris Agreement puts these jobs at risk and will increase energy costs" and lead to "$4 per gallon gasoline."

She concludes these remarks by declaring, "Here we go again!"

Which is probably how her opponents feel, too.

Click to read Boebert's bills concerning the mask mandate, the World Health Organization and the Paris climate accord.
KEEP WESTWORD FREE... Since we started Westword, it has been defined as the free, independent voice of Denver, and we'd like to keep it that way. With local media under siege, it's more important than ever for us to rally support behind funding our local journalism. You can help by participating in our "I Support" program, allowing us to keep offering readers access to our incisive coverage of local news, food and culture with no paywalls.
Make a one-time donation today for as little as $1.