Every Restaurant Opening and Closing This Week, July 23-29 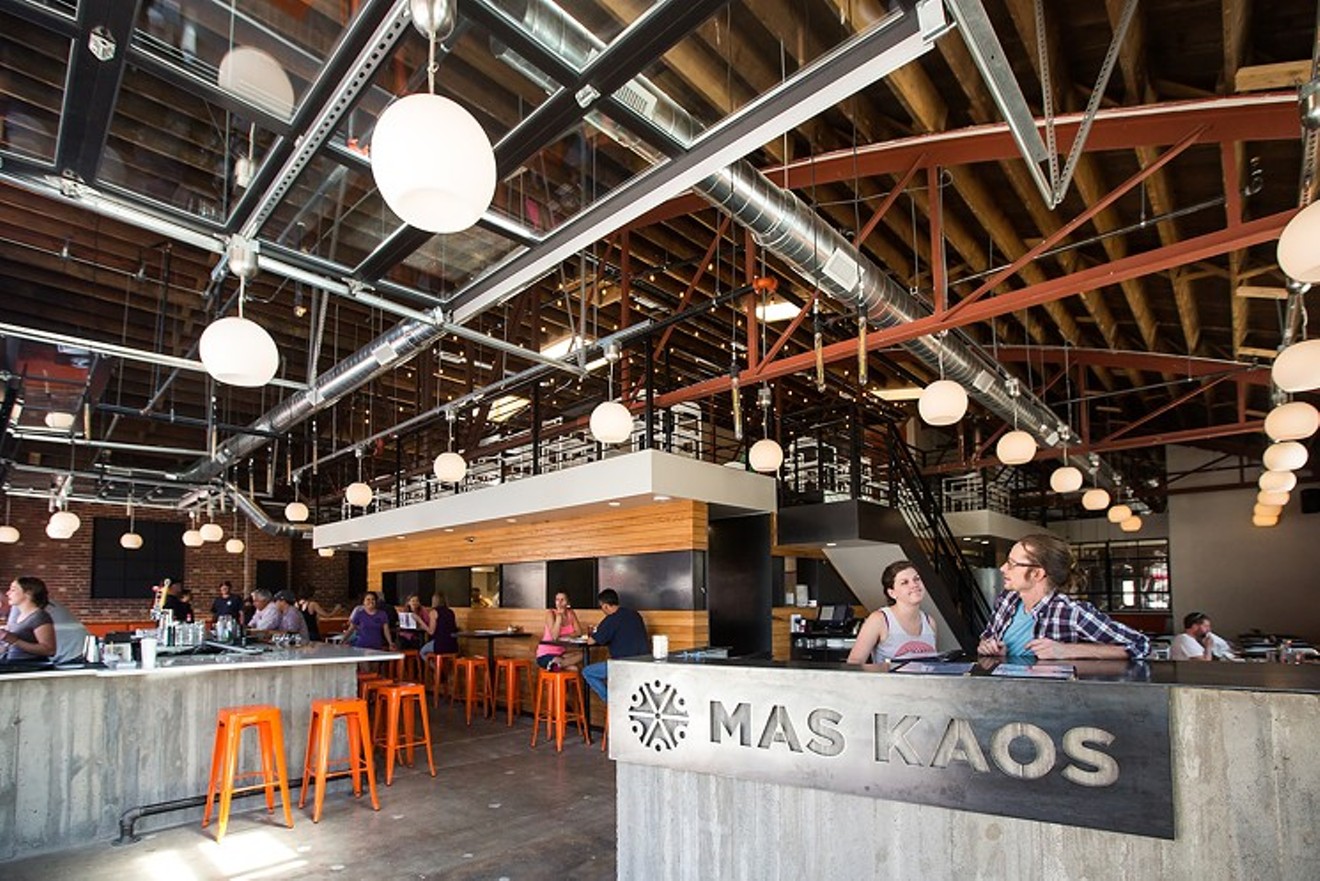 Mas Kaos has closed. Danielle Lirette
"Closing" was the word of the week as a flood of announcements about restaurants that have or will soon shut down came in quick succession.

Already closed: Mas Kaos on Tennyson Street, which shuttered just over a year after the death of its owner, Patrick Mangold-White. His other restaurants, Kaos Pizzeria, Uno Mas and Bird on South Pearl Street in the Platt Park neighborhood, as well as a second Uno Mas on East Sixth Avenue, remain open.

In Capitol Hill, both Park Tavern and Sexy Pizza on East 11th Avenue closed — though it may not be the permanent end for either. Park Tavern promised "new, exciting & tasty things" in an Instagram announcement. Sexy Pizza, meanwhile, has moved its operations to a ghost kitchen while it looks for a new location in the neighborhood. (It also has locations on South Pearl Street and in Jefferson Park.)

The Perkins on Colorado Boulevard, a longtime staple and the last location of the chain in Denver, is gone; its former home and the adjacent La Quinta are set to become an apartment complex.

And in August, Tables in Park Hill and the Saucy Noodle in Bonnie Brae will also say goodbye.

It's not all farewells, though. There are four openings to report this week, including the latest addition to a fast-growing chain specializing in Korean fried chicken: bb.q Chicken is now serving in Capitol Hill. Capriotti's is now open in Greenwood Village.
Molly Martin
In Greenwood Village, Menya Ramen has opened a stall at restaurateur Troy Guard's food hall, Grange Hall. Nearby, Capriotti's, a sandwich chain that was founded in 1976 in Wilmington, Delaware, debuted third Colorado location next to the Pindustry entertainment complex. It's located between Carrera's Tacos, which began as a food truck and opened its brick-and-mortar location in April, and a soon-to-open outpost of Korean fried chicken chain Wing Wok. This Capriotti's location is owned by local franchisee Terrence Kane and his sister, Norma Rochford; the pair plans to open a total of nine outposts of the sandwich shop in the state.

And Lyons has a new dining option: Marigold, a bistro serving food influenced by the cuisine of northern Italy and southern France. It's owned by chef Theo Adley, who owned the Pinyon in Boulder (which shuttered in 2012) and was the executive chef at the Populist for four years. The Perkins and La Quinta Inn at Colorado and Evans will be knocked down to make room for a new apartment complex.
Molly Martin
Restaurants and bars opening this week:*

What did we miss? Post a comment or share your thoughts at [email protected]
KEEP WESTWORD FREE... Since we started Westword, it has been defined as the free, independent voice of Denver, and we'd like to keep it that way. With local media under siege, it's more important than ever for us to rally support behind funding our local journalism. You can help by participating in our "I Support" program, allowing us to keep offering readers access to our incisive coverage of local news, food and culture with no paywalls.
Make a one-time donation today for as little as $1.