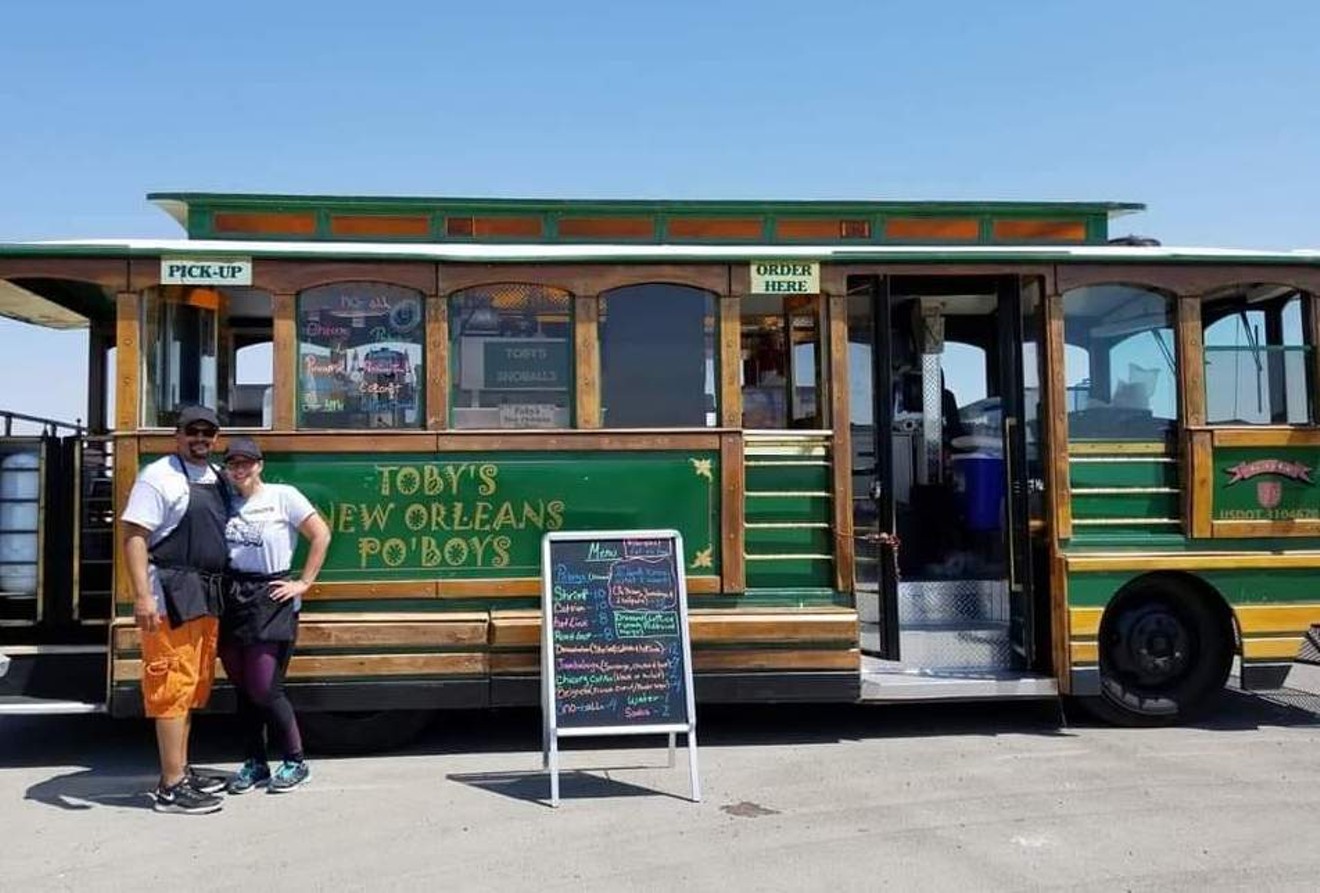 The owners in front of their trolley...we mean food truck. Damon and Maria Tobias
Toby's New Orleans Po'Boys is more than just a literal vehicle for tasty Cajun and Creole bites: It's a love story in three parts. First, between Damon and Maria Tobias, owners of said truck (which is decked out to look like a trolley — or, as one would say in New Orleans, a streetcar). Second, the Tobiases hold a place in their hearts for the community they serve, forgoing the usual food truck brewery circuit to bring goods to less served areas. And the last part, anyone can taste in the po'boys, red beans and rice, gumbo and beignets that the husband-and-wife team make.

"Everyone wants to remember how their mom cooked, and we hear it all the time that it tastes like their mama's or grandma's cooking," says Maria. "A lot of recipes are from Damon's grandma, and it's like eating his family heritage."

The beginning of the story is a tale of a man from New Orleans and a woman from the Dominican Republic who fell in love almost two decades ago. Maria, who was born in the DR and moved to Astoria, Queens, in New York City when she eighteen, laughed off her sister's claim that she had met Maria's future husband while serving in the military. Damon, who was born in Nashville, grew up in New Orleans and moved to Denver in the mid-1990s for work, also didn't believe that his comrade in the Army had the perfect woman for him. They were both wrong.

"I tell Damon we were meant to be. In Queens, the widow of Louis Armstrong was our neighbor [a nod to New Orleans], and our dog was named Denver [where she moved to be with Damon]," recalls Maria. "If you told me as a Dominican woman I would marry a man from New Orleans, I would have said no way."

The moment they met, they were smitten, and soon they discovered that New Orleans and the DR also have a lot in common — particularly when it comes to food.

"Dominican culture is really close; it's the same age as New Orleans and includes French colonial aspects, a time with slavery and a rich history of cooking," says Maria.

Damon adds, "When I introduced her to New Orleans food, she said, 'We have the same thing — beans and rice,' and in the Dominican Republic they have chimichurri sandwiches, and we have po'boys." 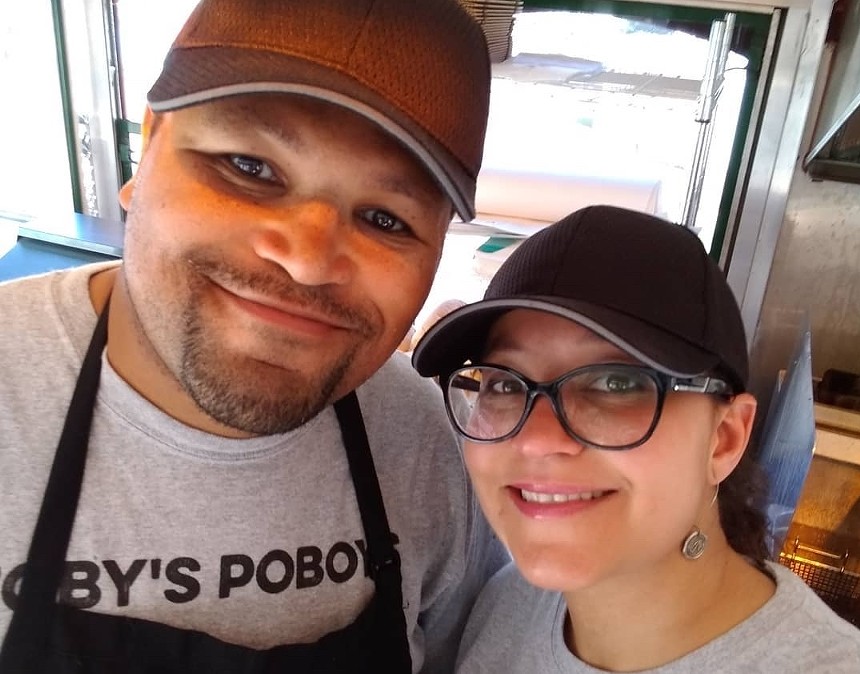 Maria, who has a culinary background, moved to Denver, married Damon and eventually quit her late-night restaurant job to start a family. Though the couple has long shared a passion for making and serving food, the idea of starting a business came later, after Damon had a bad experience at a food truck. "It wasn't very good, which gave me the thought that I could do something better," he says. "I immediately had a concept in my head, since there's not much New Orleans food here, and the food that is here is at sit-down-and-eat types of places."

It was then he got the idea to make a Creole and Cajun food truck. But Damon didn't want just any vehicle; he wanted to transport customers to New Orleans, both through the food and the way the truck looked, by modeling it after the classic streetcars in downtown New Orleans.

He brought up the idea to Maria, who says she thought it would be his "boat," aka that project someone starts working on as a hobby. Damon found a used wedding bus online, they bought it, and he used his skills to redo both the interior and exterior, putting in new wiring and outfitting the vehicle for service. Two years later, he was ready to get a license. Toby's, a moniker that comes from the couple's last name, Tobias, officially started serving customers on June 27, 2018.

"I wanted the concept to really just snag you off the streets, especially people who have been to New Orleans," says Damon. "I have a lot of people challenging us, saying, 'Where you from in New Orleans? Is this real?' But between me and Maria, we got it set up to be really authentic."

After working full-time and running the truck part-time, the Tobiases decided it was time for Maria to take the reins. She quit her job and made Toby's her focus. A couple years later, Damon left his place of work, too. "I had been a bio-engineer since I was 17, and I was ready to retire — even though I'm not that old, 45, but it's a stressful job," he says. "One day I was putting in a machine and the lady said, 'Do your blood pressure so I can check." His blood pressure was so high, Damon got another machine, thinking the first was broken. The second reading was worse. "Maria saw me after and said, 'If running the truck is good enough for me, it's good enough for you.' And I never looked back." Now their whole lives revolve around the food truck. Often, their two kids, ages eleven and fourteen, help out, too.

"The truth is, we have hit our niche in the market. There are a lot of food deserts around Denver, which are the spots we hit on a regular basis," explains Damon. "When we do the neighborhood here [around Green Valley Ranch], people are literally coming to get dinner for their family, and we sell out quickly. The people that know us, know. And it's grown so much we haven't had to do any advertising." A half shrimp, half hot link po'boy from Toby's is big enough to share — if you want to.
Molly Martin

The success of the Tobiases' concept isn't just in the truck's unique look and the jazz music wafting from the speakers; it's in the carefully crafted food, says Damon. It's straightforward and authentic, and the few items the couple makes, they make well.

As the name suggests, po'boys are the main draw. "There's the whole New Orleans gas station fast-food culture, and po'boys are ubiquitous," says Damon. "I really wanted to hit people from New Orleans with a nostalgia bomb."

The menu always features classic po'boys stuffed with fried shrimp, hot links and/or fried catfish, as well as daily specials like fried alligator and mushroom. There's even a po'boy called the Devastator, which comes with a pile of all the regular meats on one sandwich. The sandwiches are served on special bread, which the Tobiases tried flying in daily from New Orleans at first, before quickly realizing that wasn't the best method. Now, the large, soft French bread rolls are sourced from a local, unnamed bakery.

Each po'boy costs between $11 and $14, and they are large enough to count as a meal for most appetites. Damon wants to keep costs down, both to serve his community and to keep in tandem with the history of the po'boy. According to him, the story goes like this: Decades ago, there was a strike in New Orleans and the workers didn't have a lot of money. A convent in the city began making them sandwiches, and when a worker would come to get one, the sisters would say, "We have another poor boy here." It was shortened to po'boy, and while the strike ended, the sandwich lived on.

"In the same spirit, we serve po'boys and we don't think we should gouge. It should be affordable," says Maria. "If we see someone that's hungry, we feed them. That's the spirit of the sandwich."

Visitors to the truck can also get ever-changing sides such as red beans and rice, gumbo, jambalaya and crawfish pasta. And for dessert, there are sno-balls, a classic New Orleans sweet that's like a snow cone, but instead of chunky cubes, the ice is ground so fine, it's "like Aspen powder you ski on, and
every bite you get is flavor, flavor, favor," says Damon. The cold treat gets topped with an array of syrups such as bubble gum, coconut, chocolate, pistachio and even dill pickle. There's also tiger blood, which Damon says tastes "red" and is a real New Orleans treat. Top any sno-ball with condensed milk for an added layer of sweet creaminess.

As for opening a permanent spot, don't hold your breath. "We love the freedom of a truck, and this business is one of the least stressful jobs I ever worked," says Damon. "If it's raining or snowing sideways, we don't have to go out. It gives us that work-life balance."

Find the weekly schedule for Toby's at facebook.com/TobysPoboys. The truck will also be at the Green Valley Ranch Farmers'Market (4890 Argonne Way) on Wednesdays from 5 to 8 p.m. for the season.
KEEP WESTWORD FREE... Since we started Westword, it has been defined as the free, independent voice of Denver, and we'd like to keep it that way. With local media under siege, it's more important than ever for us to rally support behind funding our local journalism. You can help by participating in our "I Support" program, allowing us to keep offering readers access to our incisive coverage of local news, food and culture with no paywalls.
Make a one-time donation today for as little as $1.