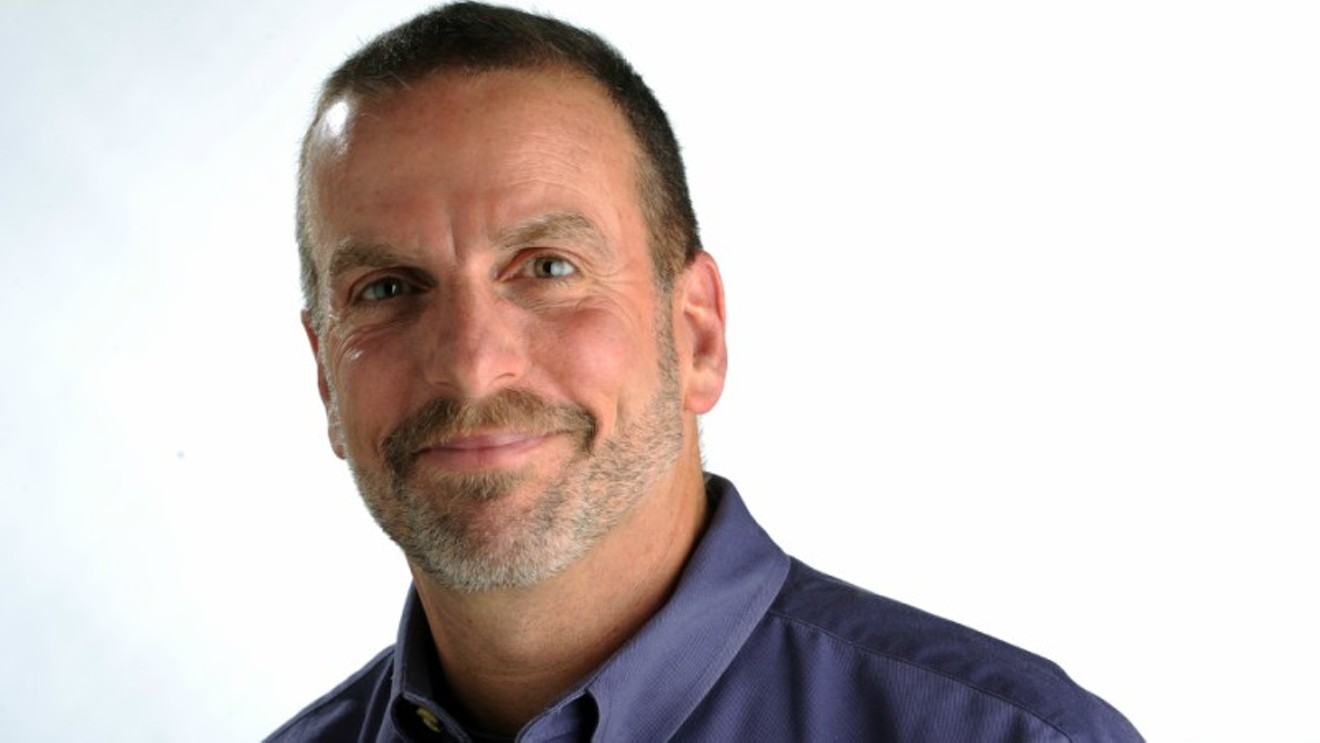 Dave Krieger is currently a free agent. Courtesy of Dave Krieger
Last week, Boulder Daily Camera editorial page editor Dave Krieger was fired after self-publishing an attack on Alden Global Capital, his paper's Machiavellian hedge fund owner, that his publisher had spiked. Now, he's written an unvarnished account of his pink slipping even though he knows that pulling back the curtain on the episode could hurt his chances for a new gig in journalism.

"I realize that, as an employer, reading a screed like this in which an ex-employee offers a detailed, behind-the-scenes description of a previous employer, could be a disqualifying factor all by itself. And I understand why," Krieger writes in "Say Goodnight, Gracie," which can be found at his Boulder Free Press blog. "I have never before felt required to give a public account such as this. It is my fondest hope that I never will again."

In conversation, Krieger adds, "I want employers to know they can take a chance on someone who'll blow the whistle on a bad situation if they have a good situation."

The scenario currently facing the Daily Camera and the Denver Post, also owned by Alden, hardly fits this last phrase. Last month, the Post announced the impending layoffs of thirty employees, or roughly one-third of its newsroom, even though the publication reportedly continues to generate hefty profits. The Camera, too, is being squeezed for every last dime of revenue while having its resources slashed, and after the Post published an editorial package ripping Alden, Krieger decided to get into the Boulder angle after being asked to write an editorial commemorating the first Colorado Journalism Week, which got underway on April 16.

But as he recaps in "Say Goodnight, Gracie," Camera publisher Al Manzi objected to the results, and when Krieger shared the rejected copy online, Manzi brought the hammer down on him for disparaging the paper's ownership. But rather than staying silent about what happened to him, he chose to speak out again.

In Krieger's view, "it's a real challenge to get the story out of what's happening to newspapers in Colorado run by Alden Global Capital," he says. Publications like his "are the ones that are supposed to tell these kinds of stories, but they won't because they're under instructions by Alden Global Capital not to. So how do you get the story out? It seemed to me this was one way to do it. I wanted to tell a compelling story — and people like to read about people getting fired."

Alerting the public to Alden's nefarious influence "has been much more difficult to get into people's consciousness than I would have imagined in these days of social media. I kept being told by my bosses, 'Everybody already knows this. The story's been told. It's been in The Nation, it's been in The American Prospect.' But they're completely wrong. They think that people know, but they don't know." 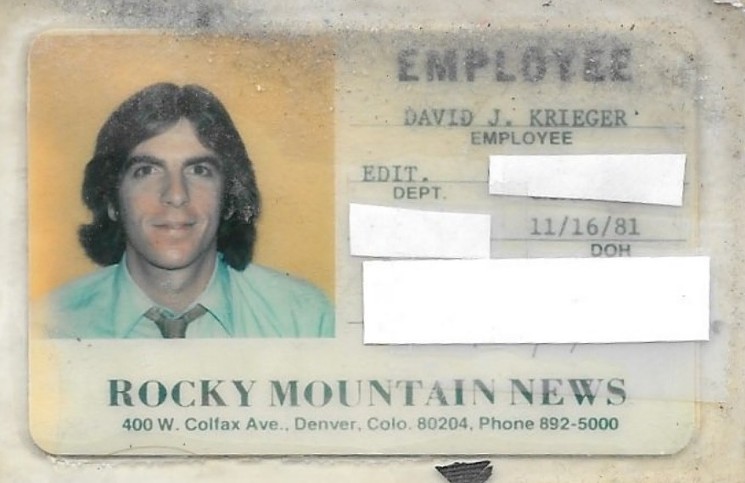 Dave Krieger's identification card during his earlier days at the Rocky Mountain News.
Twitter
Last fall, long before Alden's latest shenanigans, Krieger goes on, "I created a Google doc and took it around, trying to get people in the business community interested in buying the paper. But even after the original blog post of the editorial ran, I would have people prominent in Boulder who I would have thought would have been well aware of what was going on say to me, 'Holy crap! We didn't know this.'"

When he sent some links about Alden to one longtime subscriber complaining about his rates being jacked up as the Camera continued to shrink, Krieger recalls, "He wrote back, 'As the kids say, OMG.' And he expressed to me this moral quandary: 'Do I support these vulture capitalists by continuing to subscribe, or do I cancel my subscription and contribute to your demise?'"

Krieger doesn't have any easy answers, but he sees some reasons for optimism about print journalism moving forward. "What Jeff Bezos has done at the Washington Post is an inspiration. It's back to where it was when I was a young man and Watergate was going on. The New York Times is doing good work. John Henry bought the Boston Globe and it's safe now. The Philadelphia papers are now owned by a trust set up by some rich old dude who bought them out of private equity."

He notes that "these are models that go back to the old days of rich benefactors owning papers, but they take out the personal agenda so many older tycoons had — although some of that is happening, too, as you can see with Sheldon Adelson in Las Vegas. But honesty, it doesn't get any worse than private equity. I've worked for some bad, penny-pinching journalism chains — I've worked for Gannett twice, and it's the McDonald's of journalism. But nothing is as bad as this. At least those companies wanted their newspapers to survive. These private equity firms want the businesses to fail, so they can move on to something else. They're like a predator in an alien invasion."

Over the past decade, Krieger has watched plenty of bad things happen at traditional journalism businesses. He was a member of the Rocky Mountain News staff when the venerable tabloid went belly up in 2009, and while he avoided becoming a downsizing victim at the Denver Post, his next landing spot, by jumping to KOA radio, the gig didn't last nearly as long as he'd hoped.

Nonetheless, Krieger stresses, "I don't feel snake bit at all. That would be thinking I was the victim of bad luck or something, and I'm not."

In his view, "the key moment in that timeline was the Rocky Mountain News closing its doors. I had been there for 27 years, and if it hadn't died, I would still be there. I would have retired there. I had a great gig writing a sports column and I worked for great people. As difficult an employee as I now seem to be, it was possible for me to find a situation I thought was wonderful and where people liked me well enough, even though I was a pain in the ass there, too; I was head of the union for a while." 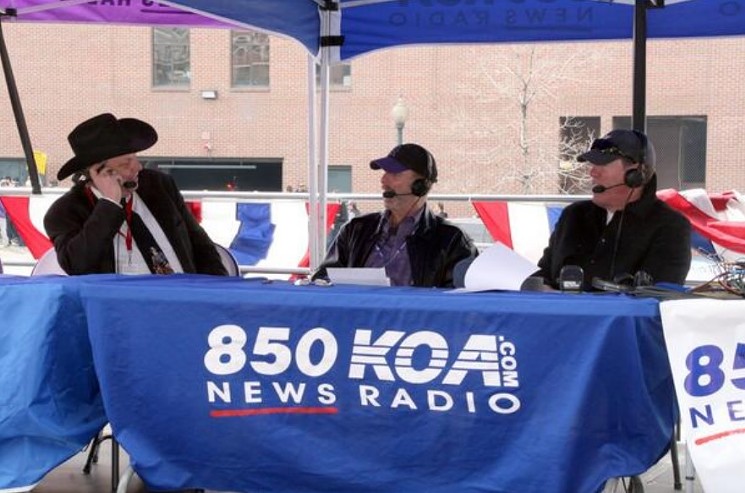 Former Rocky Mountain News baseball writer Tracy Ringolsby with Dave Logan and Dave Krieger during the period when the latter pair teamed up on KOA radio.
Facebook
After the Rocky folded, "the Denver Post brought ten or twelve people over essentially so they could get Rocky subscribers to re-up, because Rocky subscribers were automatically transferred to the Post under the joint-operating agreement. That was a ten or twelve month process for Rocky subscribers coming up for renewal, and when those twelve months passed, it was obvious the Post had no interest in us. The cultures were so different. They even laid off Mike Littwin, one of the best columnists in the country, a few months after I booked — and I think they would have laid me off, too."

KOA "was a great landing spot for me because of Dave Logan, who I knew, and working with him was great fun. But those jobs are all about raising revenues, which is what hosts are supposed to do. I was told it didn't matter because Dave was bringing in so much revenue himself, but that didn't turn out to be true. I think I did a garage door ad once, but I was terrible at that, and when the private equity firm that owns them looked at the salaries, they were like, 'What does this guy bring in? This guy doesn't pull his own weight.' And it's true. I didn't."

The position at the Camera "was a great adventure — most of it anyway. It was a smaller newsroom that was really familiar and intimate, and I worked with good people who treated me well and gave me a chance when not a lot of people thought hiring an old, white sportswriter for the editorial page was a good idea. But I felt strongly that the people in Boulder needed to know that their 128-year-old newspaper is on the verge of death and it needs to be saved. If they decide not to, that's fine, but they didn't know, and we didn't tell them."

Doing so led to Krieger's ouster, and he knows that finding another position in journalism won't be easy. "When I was unemployed after KOA, I was out for five or six months, and I was three-and-a-half years younger than I am now — and unemployed, white collar sixty-somethings with a history in an industry that seems to be dying aren't particularly hot in the job market."

Still, he says, "I'm not worried about it. Life has become a series of these short gigs, and I'm ready for the next one, whatever it is."