The Ten Best Rooftops for Eating and Drinking in Denver The views at the Red Barber are impressive. From the Hip Photo
Whether the weather is sunny, cloudy or cool, Coloradans love being outdoors — maybe even more than we love eating and drinking. But why pick favorites when you can do it all at once? Since the pandemic, we have even more patios to choose from, as many bars and restaurants have been able to expand outdoor seating over the past two years through programs offered by the City of Denver and several suburbs.

But some spots take al fresco to a whole new level. Bars and restaurants with rooftops are plentiful all over the Front Range, but what makes the best ones stand out? Right now, we're partial to the under-the-radar options where you don't have to cram too close to other people; the classics that survived the pandemic and are ready to be revised; and some of the new additions that have stepped up the rooftop game.

They're not all within city limits, either. After all, if you're looking for the best eats and drinks along with killer views, you're ready to hit the heights. Here are the ten best rooftops to visit right now: Briar Common's rooftop is the perfect summer retreat.
Jess Blackwell Photography
Briar Common Brewery + Eatery
2298 Clay Street
720-512-3894
briarcommon.com
This gastropub opened in late 2016 in an odd, wedge-shaped building seemingly dropped into the middle of an intersection in the Jefferson Park neighborhood with little attention to traffic or practicality. But it's been embraced by the neighborhood for a few reasons: the friendly staff, the well-thought-out menu; the timeless brews — you won't find any Belgian rye imperial session IPAs here — and the rooftop. During the summer, it's a parkside haven for city views — and it's available to book for private events, too, if you want an exclusive rooftop experience. Chef Jesus Silva's Sushi Sora is a main draw at the Golden Mill.
Molly Martin
The Golden Mill
1012 Ford Street, Golden
720-405-6455
thegoldenmill.com
This historic mill turned food hall opened in 2021 and has quickly become a destination for anyone looking to head (a little) west for some staycation fun in Golden, where Clear Creek's cold waters beckon tubers in the summer months. The expansive rooftop has a view of Coors Brewery and another big bonus: some of the best sushi in the state, at chef Jesus Silva's Sushi Sora. Fill up a glass at the pour-your-own-beer wall downstairs, then settle in for an afternoon of sunny sipping and noshing. The rooftop patio at Historians Ale House is a great setting for brunch.
Bridget Wood
Historians Ale House
24 Broadway
720-479-8505
historiansalehouse.com
Broadway staples the Fainting Goat and Historians Ale House are both longtime favorites for dive-bar vibes and rooftop views along this busy stretch of road, especially on weekends. But during the week, the upper level at Historians is a quieter refuge for an al fresco lunch break, where you can enjoy one of the best burger deals around: $7.95 for a cheeseburger, fries and a beer, well drink or soda from 11 a.m. to 3 p.m. Pizza and views at Joy Hill.
Molly Martin
Joy Hill
1229 South Broadway
303-954-8784
joyhilldenver.com
Sure, the rooftop at our 2022 Best of Denver pick for Best Restaurant Patio is only two stories up, but it still boasts a killer view of the Rocky Mountains — and it won't trigger anyone's fear of heights. Paired with a thoughtfully crafted cocktail or a glass of Lambrusco and Joy Hill's sourdough-crust pizzas, the view provides the ultimate colorful Colorado experience. If you've yet to feel the joy at this spot that opened just before the pandemic hit in 2020, this is your sign to go, ASAP. 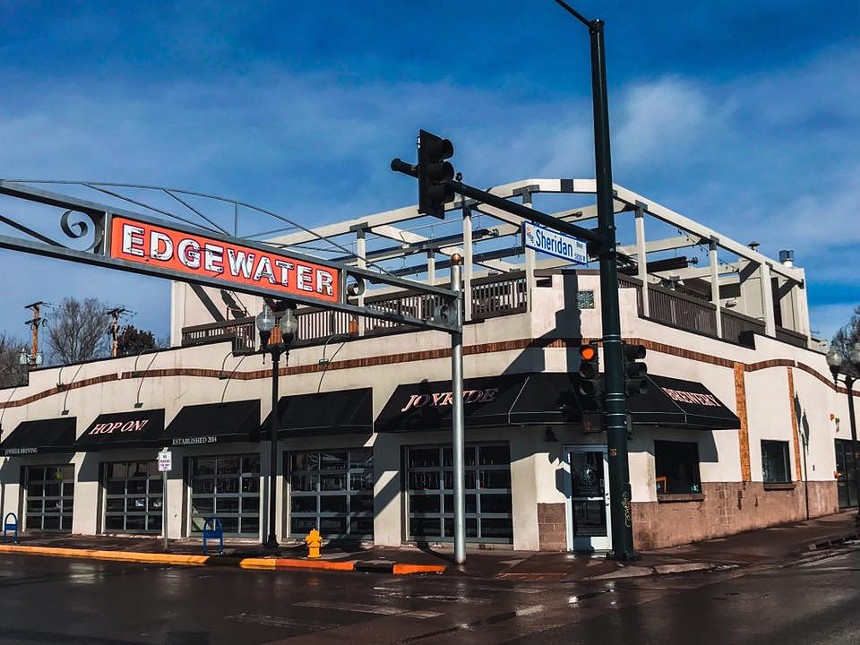 Joyride added a rooftop patio in 2019.
Courtesy Joyride Brewing
Joyride Brewing Company
2501 Sheridan Boulevard, Edgewater
720-432-7560
joyridebrewing.com
In 2014, Joyride became the first brewery to open in Edgewater — an area that's since gotten a ton of new reasons to visit, including its own food hall, Edgewater Public Market (which also has a rooftop bar). In 2019, Joyride's owners finally debuted a longtime dream: the brewery's rooftop patio, which boasts not only its own bar with sixteen taps and room for 150 people, but stunning views that take in Denver's skyline to the east, busy Sloan's Lake Park just across the street, and, on a clear day, Pikes Peak to the south. Linger's rooftop has long been a favorite, especially for brunch.
James Florio
Linger
2030 West 30th Avenue
303-993-3120
ediblebeats.com/linger
Back before new construction blocked some of the views, the rooftop at this restaurant built from the bones of the old Olinger Mortuary building was one of the most scenic places to dine in Denver. And while there may be more buildings surrounding it now, the eleven-year-old spot remains a go-to for good reason. Sure, its nearby sister restaurant, El Five, may be higher, but we love Linger's more casual vibes and quirky touches, like the cocktails listed on toe tags, tables built from gurneys, and water served in apothecary bottles. Weekend brunch on the rooftop has long been an upbeat scene, and it's one worth revisiting time and time again.

Odell's Sloan's Lake location opened in 2021.
Hali Groninger
Odell Brewing Sloan's Lake
1625 Perry Street
303-376-3777
odellbrewing.com
On the south side of Sloan's Lake, just over a mile from Joyride, is another brewery rooftop, this one mere feet from the park's water-side walking paths. Odell opened at this location last spring, and it handily nabbed our Best of Denver 2022 pick for Best Brewery Patio thanks to its ample space, quintessentially Denver views of the lake, and the delicious variety of beers that are brewed beneath your feet. It's also the first Odell location to offer housemade dining options, including pizzas topped with seasonal ingredients. Head to Littleton to sip mezcal on Palenque's rooftop.
Palenque Cocina y Agaveria
Palenque Cocina y Agaveria
2609 West Main Street, Littleton
720-245-0195
palenquecya.com
Downtown Littleton often gets overlooked by those who live closer to the city, but it's home to a number of rooftop patios where you can enjoy the slower pace of the suburb, which happens to be packed with locally owned gems. Exhibit A: mezcal mecca Palenque, which originally opened in 2018 as a second location of Adelitas but took the Palenque name after former co-owners Silvia Andaya (who still runs the original on Broadway) and Brian Rossi cut ties in 2020. Two years into its new iteration, there's no better place south of the city to learn about — and sip plenty of — a well-curated selection of agave spirits and cocktails than the upper level of this Main Street eatery. 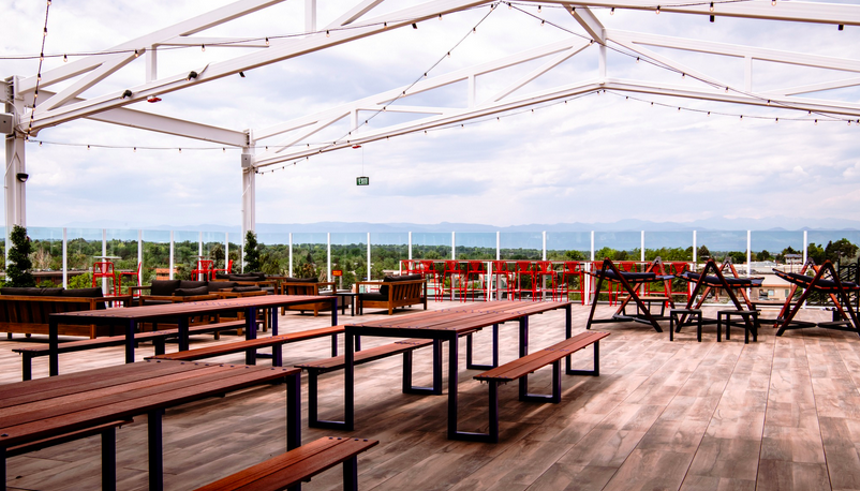 The Sky Deck at Pindustry is massive.
Pindustry
Pindustry
7939 East Arapahoe Road, Greenwood Village
720-712-7467
thepindustry.com
For years, not much changed on Arapahoe Road near the Denver Tech Center, but a big push to revitalize the area kicked off in 2021 with the opening of Pindustry, the first major addition to what's now called the Arapahoe Entertainment District. The two-story restaurant complex can hold up to 2,300 people, and besides the bowling and arcade games on the main floor, the biggest draw is the 16,000-square-foot Sky Deck with Rocky Mountain views, its own bar, and activities like giant chess and cornhole. Game on. The Red Barber rooftop bar at the Catbird hotel.
Sage Restaurant Concepts
The Red Barber
3770 Walnut Street
720-707-4040
theredbarber.com
There's a reason this elevated escape was our 2022 Best of Denver pick for the Best Rooftop Patio: Size does matter. Located on the roof of the new Catbird Hotel in RiNo, the Red Barber boasts (nearly) 360-degree views from its perch six stories above the city. And while there are other rooftops in town with both city and mountain views, this one has 3,300 square feet of open, inviting space in which to sip cocktails, enjoy bites like wings with Caribbean hot sauce and Korean beef hot dogs, and play a game of cornhole. Comfy couches are prime spots for lounging, or opt for the grassy picnic area or a spot near a fire pit — there's even amphitheater seating for live music performances. This is the ultimate backyard, in the sky, staffed with bartenders.
KEEP WESTWORD FREE... Since we started Westword, it has been defined as the free, independent voice of Denver, and we'd like to keep it that way. With local media under siege, it's more important than ever for us to rally support behind funding our local journalism. You can help by participating in our "I Support" program, allowing us to keep offering readers access to our incisive coverage of local news, food and culture with no paywalls.
Make a one-time donation today for as little as $1.