A Texan's Guide to Colorado Marijuana 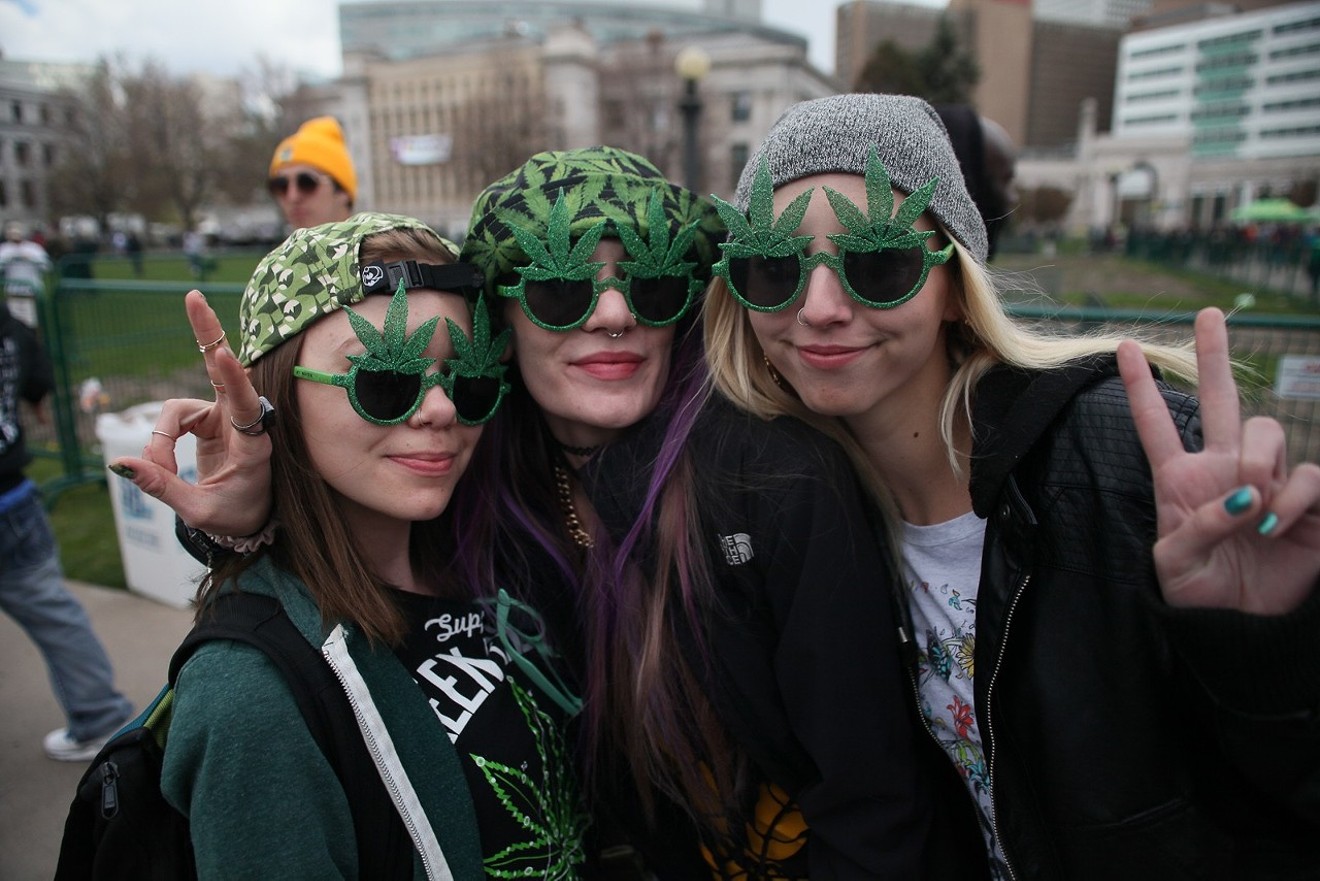 Rule #4/20: Don't wear stupid weed sunglasses. Jacqueline Collins
That Texans come to Colorado for marijuana isn't just an open secret — it's widely acknowledged. Even our governor publicly appreciates the amount of money that Colorado makes off Texas potheads, who buy so much marijuana here that we have towns turning strip malls into dispensary rows.

But listen up, Texans: If you're planning a Colorado cannabis trip out of the Lone Star State, you'll need to know where to go and how to act. Follow this guide to learn more about Colorado's marijuana laws, local dispensary scenes and more.

Colorado Laws
Before you start dabbling in our marijuana scene, it's best to know what you can and can't do in Colorado. You must be 21 or older to purchase recreational marijuana in Colorado, and you must present a government-issued ID for proof of age. Most dispensaries won't accept vertical IDs from any state, so keep that in mind when traveling.

Colorado residents and visitors alike may possess up two 2 ounces of cannabis, thanks to a new law passed in 2021, but may still only purchase up to 1 ounce of marijuana flower per day. The possession laws are the same for all types of retail marijuana, but dispensaries may only sell 8 grams of concentrates and edibles containing no more than 800 milligrams of THC.

You can carry marijuana in your car, but it must be in a sealed container. Marijuana may not be consumed openly or publicly in Colorado, but there are a few lounges and venues that allow marijuana use.

Border Dispensaries
You'll likely pay more for less quality, but for those trying to get in and out of Colorado quickly, a border dispensary is obviously the best route. Unfortunately for Texas, marijuana-friendly towns on Colorado's southeastern border are rare, and your closest dispensaries are in Las Animas or Trinidad.

Las Animas, a town of just over 2,000 people, has quietly become a small hot spot for marijuana sales, expanding to five dispensaries. But Trinidad is the pound-for-pound champion, housing 25-plus dispensaries in a town with a population of about 8,000, and boasting a lot more competitive weed prices. Trinidad is also a growing destination for Colorado entrepreneurs, who've been investing in local restaurants, shopping and entertainment, giving the historic town an extra level of charm it didn't have two years ago.

Walsenburg and Rye, two towns just north of Trinidad, also have a couple of dispensaries, but not much else.

Trinidad is home to 25 marijuana stores despite having a population of fewer than 9,000 people.
Google Maps screenshot
Dispensaries Outside of Denver
If you have to drive that far to the closest dispensary, then you might as well make a trip out of it. Denver is Colorado's cannabis mecca, but most of the bigger and tourist-heavy towns allow recreational sales, too (outside of Colorado Springs, but you're not missing much there). Aspen, Breckenridge, Crested Butte, Eagle County, Steamboat Springs, Telluride and most of the mountain communities have dispensaries inside or just on the edge of their borders, and so do other popular destinations like Boulder, Fort Collins and Durango.

Denver Dispensaries
If you want the most options and competitive prices for marijuana, then Denver is an easy choice. The city has over 100 recreational pot shops and is home to most of the state's best growers and dispensaries. We rank some of the city's best marijuana brands and stores each year in our Best of Denver awards, but if you're searching for some of the strains you're familiar with, check out these stores that sell more classic strains.

Marijuana Lounges
Outside of Denver and Colorado Springs, finding a marijuana lounge can be difficult in Colorado. However, if you do make it to the big city, a few places in the metro area allow marijuana use. The Coffee Joint is currently Denver's only licensed pot lounge, but visitors can only vaporize their marijuana or eat edibles there. There are also several private lounges where members can light up, and virtually all of them allow people 21 and older to sign up for a daily or temporary membership.

Mobile lounges and marijuana tourism companies are also slowly coming back into the fold after the COVID-19 pandemic. Colorado Cannabis Tours, a pot hospitality company offering 4/20-friendly tours, art classes and other activities, is your easiest bet at the moment.

Things Not to Do
Most of the annoying marijuana tourists have calmed down now that Colorado isn't one of just a few states with legal weed, but there are still several no-nos in our marijuana space. Smoking weed in heavily trafficked public places or hitting a vape pen at a restaurant might not get you arrested, but it's still rude and annoying. So is complaining to the budtender about sales taxes (they didn't set the rates) or bitching about handing your ID over for a few seconds.

Marijuana use and possession are still banned at national parks in Colorado, as the land is still federally owned, and smoking of any kind is prohibited at state parks. Most of us don't follow those rules, but we still clean up after ourselves.

So get ready to play along and enjoy the ride — and give us your money, please.
KEEP WESTWORD FREE... Since we started Westword, it has been defined as the free, independent voice of Denver, and we'd like to keep it that way. With local media under siege, it's more important than ever for us to rally support behind funding our local journalism. You can help by participating in our "I Support" program, allowing us to keep offering readers access to our incisive coverage of local news, food and culture with no paywalls.
Make a one-time donation today for as little as $1.