Lettuce Funks Up the Colorado Symphony 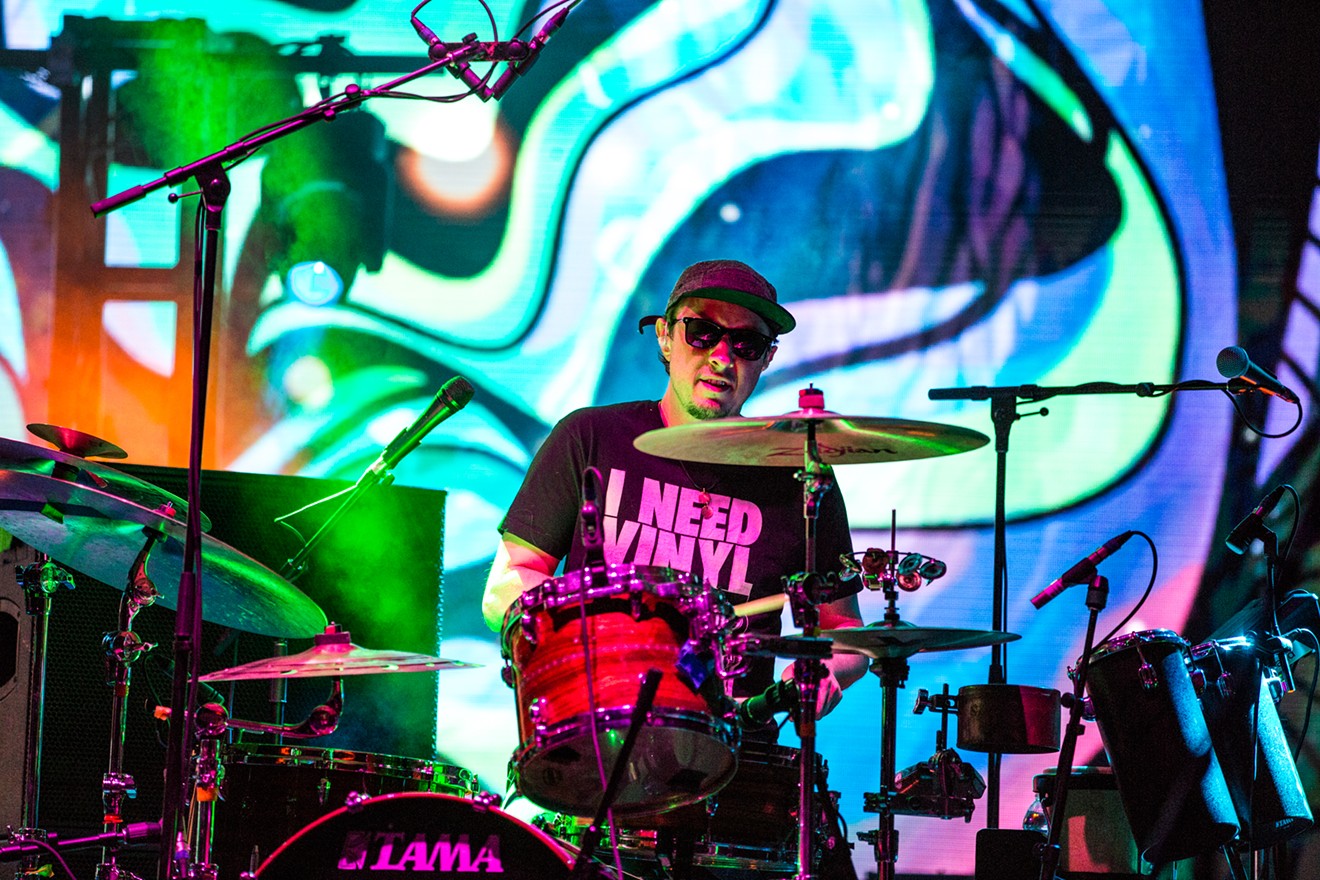 The high-energy funk band has been pushing genre boundaries since its members formed the group at a summer program at Berklee College of Music in 1994. For 24 years, the outfit has steeped itself in various styles of music, from hip-hop to classical.

The band's Denver-based drummer, Adam Deitch, says playing with the symphony is a dream he's been chasing for Lettuce since his days with the electronic act Pretty Lights. “I was the drummer for Pretty Lights for three years, and in the third year, Derek [Vincent Smith] decided to add a thirteen-piece string section; a composer wrote all the music, he put them on stage on risers behind us at Red Rocks, and it was like an out-of-body experience,” Deitch recalls.

The Pretty Lights collaboration with the Colorado Symphony four years ago left a lasting imprint on him. “I was telling my manager for years, we want to do this with Lettuce,” Deitch says. “It was just like The Secret, when you put something out there and you hope it comes back to you.”

Lettuce will play with the Colorado Symphony on Saturday, November 10.
Kelly Hueseman
On Saturday night, Deitch’s dream will finally become a reality. In preparation for this fusion of sounds, Deitch has been working closely with multi-instrumentalist Tom Hagerman, of both the Colorado Symphony and DeVotchKa. “He can hear a Lettuce song by ear, and he can write string arrangements based on the songs that make sense, without overpowering,” Deitch says. “He’s adding beauty by writing and improvising parts that will have the right fit” — from the blow of a bassoon to the blast of a French horn. Deitch calls Hagerman a “musical genius,” and says none of the upcoming production would be possible without him. “It’s going to be one of those amazing moments on earth!”

Deitch’s classical roots go back to his childhood; the Grammy-nominated drummer was born to two multi-talented musician parents. “We always listened to classical music or jazz at dinner; it was part of the family ritual,” Deitch says. While his mother favored Mozart or a string quartet, his uncle was a classical-music and opera authority. Deitch even recalls staying with his uncle in Manhattan and learning about musical history at a young age. “Even though my family was into funk and jazz, they were super-knowledgeable about classical music.”

Deitch cites classical music’s spiritual, calming effect and its ability to light up neurons in the brain and stimulate multiple senses as reasons the genre is so important to musicians. “It also gives you good musical background, good technique on your instrument,” he says.

Early in his career, Deitch began to fuse his classical upbringing into his passion for hip-hop. “I sold a song called ‘My Gun Go Off’ to 50 Cent [on the 2007 album Curtis], which is very classical, and he loved the melody and motif development. I really love mixing classical music with hip-hop, and the Lettuce guys are familiar with this, so we started playing that style, really jamming on classical, with a Wu-Tang Clan-inspired vibe.” Deitch also gives credit to early influences like Dr. Dre and DJ Premier from Gang Starr. “These hip-hop producers were using classical music with big beats and strings, and that really influenced us as a band in the early days, for sure,” he remarks.

Lettuce
Alex Varsa
While the Lettuce crew continually bonded over funk at Berklee, Deitch remembers one class, called "The James Brown Ensemble" and taught by world-renowned drummer Kenwood Dennard, that really left its mark. “We were all in this class together,” he recalls. “We were totally blown away by this class, from playing all the music by ear to the end-of-semester concert that had everyone up and dancing. It really didn’t feel like school.”

After taking that class, Deitch viewed Brown as something of a classical composer, visualizing him as more of a conductor than a singer. “Even though he was a great vocalist, he was like an extension of classical music. I can break it down to how he arranges his music so precisely that when it hits you, you feel like you're in a trance,” he explains.

Beyond the classroom, education surrounding the melding of funk and classical music unfolded on the stage for Lettuce, while observing — and jamming with members of — one particularly iconic influence: Parliament Funkadelic. “P-Funk is one of the greatest funk bands of all time,” says Deitch. “Bernie Worrell was a big-time classical musician and brought all the classical harmony on the piano and harpsichord, where he was into Bach, and he would just bring that, and [George] Clinton, being as cool as he was — even though being in a funk band — allowed the classical influence.”

Those attending Lettuce’s upcoming concert with the Colorado Symphony can expect a showcase of styles borrowed from notable muses, from Bach and Mozart to Wu-Tang and P-Funk — all with the help of musicians from the symphony.

“I don’t care if you like EDM or reggae, [the Symphony is] crushing it, especially with Tom as the orchestrator,” Deitch says. “We are super-thankful just to do this in Denver, in my current home town, and I feel like people there understand that we really care about the music more than anything. We want to present the best show possible, and it’s going to be a great, classy night in Denver.”

Lettuce with the Colorado Symphony, 7:30 p.m. Saturday, November 10, Boettcher Concert Hall, 720-865-4220, $39 to $89.
KEEP WESTWORD FREE... Since we started Westword, it has been defined as the free, independent voice of Denver, and we'd like to keep it that way. With local media under siege, it's more important than ever for us to rally support behind funding our local journalism. You can help by participating in our "I Support" program, allowing us to keep offering readers access to our incisive coverage of local news, food and culture with no paywalls.
Make a one-time donation today for as little as $1.
Tracy Block hails from Miami, and transplanted to Colorado in 2015. After a long-enough stint in the mountains, she knew it was time to reenter city civilization, and decided to settle in the progressive arms of Denver. A gluten-free foodie and a self-proclaimed wine snob, Block is always up for the next-best happy hour – dollar oysters and rosé, anyone?
Contact: Tracy Block