Alt-J performed at Red Rocks on August 7, 2017. Miles Chrisinger
In 2017, Alt-J released its third album, Relaxer, which is only topped on the eerie-and-entrancing scale by the group's production design. Last August, the band brought mesmerizing columns of light to its show at Red Rocks, and it's now launching a three-month North American tour with a two-night stand in Denver. The tour also includes some festival appearances (Bonnaroo, Coachella and Firefly, to name a few) and a one-of-a-kind "immersive sound show" in New York.

We spoke with Gus Unger-Hamilton (keyboards/vocals) about Alt-J's upcoming tour and Relaxer.

Westword: How are you feeling kicking off your North American tour in Denver?

Gus Unger-Hamilton: It’s going to be great. We all really love Denver. It’s a fun town, and we’ve got some friends there as well. We get three nights there…hopefully Denver’s ready for us.

Yeah, you guys are at the Fillmore for two nights of shows. How did that come about?

I suppose our booking agent decided, but it’s good news for us. When you get to play two nights at a place, it’s always fun, because that means the first night the crew can kind of just finish when we finish, and we can all go to a bar. It’s always a good thing to start the tour that way and bond a bit, so hopefully we’ll find a good bar where we can go and play pool, hang out and have a good start to the tour.

Can you tell me what the production will be like? Last year at Red Rocks, you all had these hypnotizing columns of light. Will there be anything like that?

Yeah, absolutely. We have this amazing light show we’re traveling with that’s been kind of been built for us, so we’re super-proud of it. It’s won some big awards in the lighting world, as well, so we’re excited to take it on tour and to bring it to Denver for two nights. It’s a really great production and almost means the music has an equal billing with the lights, I think. 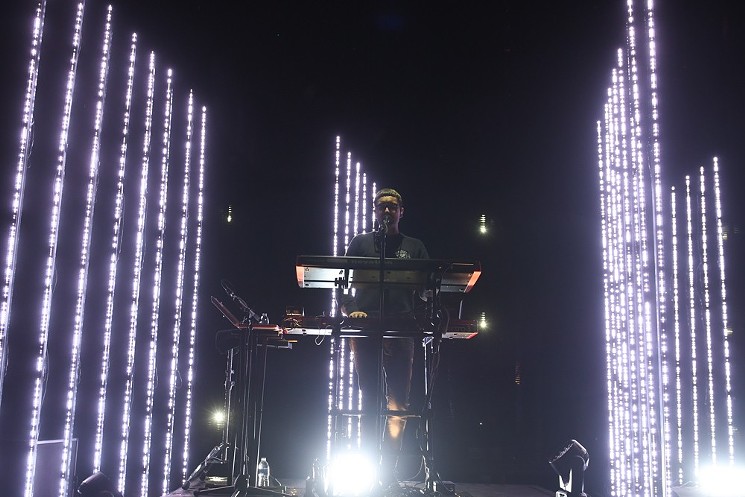 Gus Unger-Hamilton
Miles Chrisinger
From the audience's perspective, it’s pretty mesmerizing. What’s that like from the stage?

It’s cool, but it’s surprisingly easy to forget it’s all there, to be honest. You would think it would be incredibly distracting, but it’s not. It’s fun to see the audience reacting and everyone widening their eyes to take it all in, because it really is quite the whole. It gives you energy while you’re playing on stage when you’re surrounded by light like that.

Since you started as a band, has there been anything that you always wanted to try and now you can?

We’ve always enjoyed technology and being at the forefront of that kind of thing, whether it’s trying out new techniques in the studio or taking things on tour production-wise. We are going to be doing this immersive sound show at Forest Hills Stadium in New York that will be a surround-sound gig. Hopefully we can find texture within the songs from our three albums and make them fly around the stadium and get inside people’s heads in a really exciting way. That’s going to be a bit of a new frontier with our live show — and live shows in general, I think.

Moving away from production, I know you all incorporate a lot of history and pop-culture references in your music. Can you talk to me about some of the references from Relaxer?

We’ve always found that using pop references — pop culture, high culture, whatever — in our songs is a good way to soften yourself to the rock face of the song. When you're digesting culture from reading a book, watching films, looking at paintings — that will embed itself in your mind to a degree when it comes out again when you’re writing. We find that it’s a nice thing for our fans, too, because it enriches and deepens the song when there are more things for fans to discover in there.


On this new album, the song “Pleader” is based on the novel How Green Was My Valley, by Richard Llewellyn; “Deadcrush” crushed on some people in history; and in “3WW,” the lyrics that I wrote were inspired by a book, As I Walked Out One Midsummer Morning, by Laurie Lee. It’s nice to let people discover these things, and maybe they’ll read that book or watch that film, and it all leads to a nice big conversation.

Are those references chosen organically, then?

Yeah, we’re not putting them in deliberately. I think there’s a certain way of writing where you find things that move you or influence you, and you end up talking about them in your own work.

I know you guys will be working with other collaborators and reinterpreting some of  Relaxer. Can you tell me more?

I really can’t just yet, but I can say that I'm excited…

Is there one thing you’re excited for on this tour?

I’m really loving playing “Deadcrush.” It’s a song that was very collaboratively written, and Joe [Newman] and I got to work on lyrics together, which was a nice thing to do. I love playing the bass line and feeling people getting into it while we’re on stage.

When you’re talking about collaborating with lyrics, what is the process for that like? Or is it evolving?

It is evolving, but historically, Joe has been the band’s lyricist, and I love Joe’s lyrics, so wouldn’t want that to change in any major way. It’s nice to get involved in that myself from time to time. I think for most bands, the writing process is a constant evolution, and that’s how it certainly is with us. We’re all doing more here and there, and I think that’s a good thing.

Alt-J, 7 p.m. Saturday, April 7, and Sunday, April 8, Fillmore Auditorium, 1510 Clarkson Street, 303-837-0360.
KEEP WESTWORD FREE... Since we started Westword, it has been defined as the free, independent voice of Denver, and we'd like to keep it that way. With local media under siege, it's more important than ever for us to rally support behind funding our local journalism. You can help by participating in our "I Support" program, allowing us to keep offering readers access to our incisive coverage of local news, food and culture with no paywalls.
Make a one-time donation today for as little as $1.