Fast Times for the Speed Demon Rockers in Pink Fuzz

Pink Fuzz will drop its new LP, Speed Demon, on September 1. Demi Demitro
Picture a desert highway with a dusty muscle car speeding down the road so fast that it could veer off into a spiral of screeching rubber at any minute. But every time it loses control, it keeps zooming forward, tires kicking up dust, a loud guitar riff flooding out the open windows. That same fiery Wild West spirit defines the sound of Denver rock band Pink Fuzz.

Siblings John and Lulu Demitro have been playing music together since 2012, using various names, lineups and genres. What started as Branded Bandits when they were teenagers became BANDITS and, most recently, Pink Fuzz, a moniker they’re growing into that juxtaposes the bright nature of the color pink with the booming, burning depth of their music.

Since their band’s formation, the two have toured the nation, played SXSW, had songs used in the television show Shameless, and become a household name in Colorado. Six years into the heat of things, they’ve finally nailed down who they are as a band.

With John on guitar and vocals, Lulu on bass and vocals and Forrest Raup on drums, the act has found its footing. To mark a new beginning, Pink Fuzz will release its debut LP, Speed Demon, on September 1 at Lost Lake Lounge. For a band that’s been a fixture in Colorado noise rock for years, a debut album seems long overdue, but John and Lulu say that everything they’ve done so far, and every change they’ve undergone as a band, has led to this moment.

Pink Fuzz
George Blosser
“We’ve had so many phases as a band, and this album is finally a culmination of who we are, the sounds we like, and how we want to put ourselves out there,” says Lulu.

Despite the rebranding, Pink Fuzz’s thundering rhythm section, dark and gritty distortion, pummeling guitars and arresting vocals aren’t going anywhere. The members claim that this is their heaviest material yet, one that traces the group’s evolution but also reveals a softer side to the music.

“Speed Demon is very heavy, but it also has songs that are tuned back, lighter and more melodic. Half of the album is reminiscent of what we’ve done so far, but the other half is something completely different that people won’t be expecting,” says John.

The album was recorded at Silo Sound Studios in Denver. All eleven songs were tracked over two days, live to tape, a method the band’s longtime producer, Todd Divel, swears by. It grants a rawness to the recordings and captures the outfit’s clamorous live energy, then expands on it, adding new layers and vitality to an already ruthlessly noisy sound.

“Todd is an excellent producer, and he has a strong idea of how we want our songs to sound,” says John. “Silo is a second home to us. We’re able to let the creative juices flow and have a great time.”

Pink Fuzz
George Blosser
The band cites T. Rex, the Stooges, Black Rebel Motorcycle Club and the Kills as well as personal relationships and serial-killer podcasts as influences on Speed Demon, an eclectic collection of songs that waver from heavy and arresting to delicate and pulled back.

Lead single “Think You Got Me” starts as a rhythm-heavy, mid-tempo track but blossoms into a scuzzy crescendo of cinematic desert-rock clamor.

The video for “Enough,” a single released last year, is an intensely stylized and self-produced project that shows a high-speed desert chase between two characters, all put through a filter of deep pink fuzz. Besides inspiring their new name, the musicians say, this aesthetic shaped how they visualized Speed Demon, as well as two new videos they have planned for the record.

“It feels like we could take every single song on the album and make a music video with a story for it,” says Lulu.
With new cross-country tour dates in the fall, the long-awaited album and a strong sense of who they are, Pink Fuzz’s members are on the cusp of something much bigger than themselves and the city that raised them.

“Denver music is definitely stuck in a rut right now of psych-wave and throwback stuff,” says John. “We need to support bands who are doing something new.” 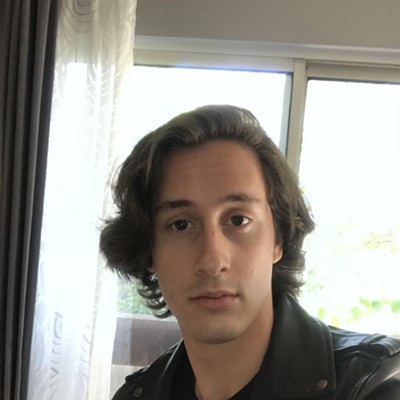