Eyehategod Is Moving Beyond Shock Value 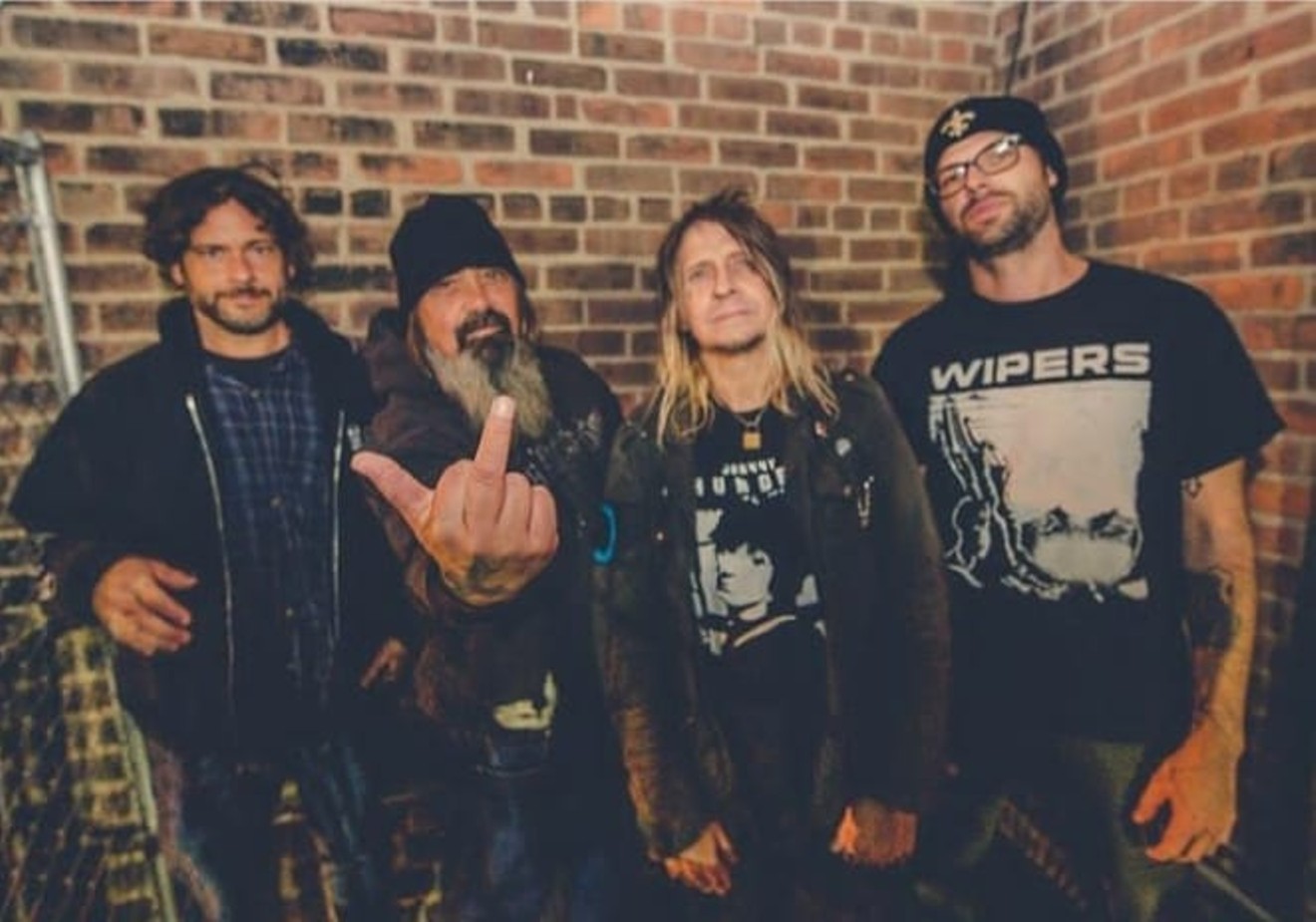 Eyehategod is still kicking after 34 years. Courtesy Evil Robb Photos
Mike IX Williams may be possessed. Even after 34 years, the lead singer and lyricist of New Orleans outfit Eyehategod confesses he still isn’t sure how he produces the tortured screams and wails that have become his signature style.

“I don’t know, man. I really don’t know. It just happens; with this band, it just kind of flows with us,” he explains. “I still write the same way. I’ll think of an idea and jot that down, then come back to it later and write stuff around it. Or sometimes I’ll write a whole song. … Later on, I’ll pick lines out of it to use. But I don’t sit down and think, ‘Okay, I’m going to write a song.’ I’ve never done that. There’s always something that comes up. It’s kind of constant.”

No matter where the unhinged poetry and prose of Williams comes from, it mixes and melts with the music of founding guitarist Jimmy Bower, bassist Gary Mader and drummer Aaron Hill in such a way that it makes you question the entire band’s sanity. Since 1988, Eyehategod has been one of the most unforgiving acts out there, as the quartet has become the soundtrack of dirty needles and mental breakdowns. But amps speak louder than words. Eyehategod plays HQ on Thursday, September 29, with Savage Master, Messiahvore and Lungburn providing support.

Williams has been open about his past struggles with addiction and chronicled his personal horrors following Hurricane Katrina that included a liver transplant. He enjoys the cathartic release of fronting a band that revels in dread and misery.

“It feels great. It’s fantastic, man,” he says. “Sometimes my words, even to me, will seem like jumbled pieces and parts of things. But then once you put them together and you have them flowing in a song, it starts to mean something to me. Sometimes I don’t know what it means, but it means something. I think other people get that, too.”

He admits, “We started with a lot more shock value. We wanted to give people anxiety attacks purposely.”

Song titles like “Kill Your Boss” and “Sisterfucker” from the 1993 classic Take as Needed for Pain, as well as Williams’s album art displaying black-and-white photos of off-putting medical oddities, are examples of the band’s inherent shock value, but Eyehategod’s staying power is a testament to the music itself. It’s Black Sabbath on codeine stumbling through a corpse-infested swamp. Bower’s guitar work is the reason for that, but the style has earned the nickname “sludge,” a moniker Williams despises.

“I hate that word, ‘sludge,'’’ he says, adding a chuckle and a “Fuck, no” after being asked facetiously if he coined the term. “Any time somebody brings it up in an interview, I have to tell them that I hate it. I know it’s been in print before that I don’t like that term. I mean, I’ll accept it. Fans will be like, ‘You’re the best sludge band.’ I’m like, ‘Okay, that’s fine,’ but I don’t necessarily call ourselves that. I’ll just say that we’re a rock-and-roll band. It’s rock-and-roll when you look at it. Some people get mad when I say that. I’m influenced by all the old punk stuff and back to New York Dolls and the attitude of all those rock bands.”

He adds that the band, which started as a side project, has “become my life. It’s basically become everything.”

Whatever you want to call it, no one can deny the impact of Eyehategod, which has become the flagbearer of the fertile New Orleans scene, alongside brethren Crowbar, Down and Goatwhore.

“We never thought we’d be around this long. We were all in different bands. We were doing Eyehategod because we were getting into this new stuff that we liked. We just had this band in our head that we wanted to hear, so we were just doing this on the side. But it became our main thing,” Williams says.

At 54, the frontman still enjoys the process and touring. His scratching-at-the-eyes-of-God vocals on Eyehategod’s 2021 album A History of Nomadic Behavior is further proof of his commitment to creating grimy grooves. Those curious about seeing the band live can expect “a lot of energy and feedback and just heavy, heavy stuff,” Williams says.

“I mean, I’ve seen people cry at our shows — not because they’re sad, but because it’s a release. The emotional thing, I think that’s great. Lots of people tell me that [we got them through] the worst times in their life. ... I never expected that with this band, but it’s cool that people say that,” he adds. “Our imagery, words and lyrics might be dark, but we just like to have fun. That’s what it’s all about in the end.”

Eyehategod, 7 p.m. Thursday, September 29, HQ, 60 South Broadway. Tickets are $20.
KEEP WESTWORD FREE... Since we started Westword, it has been defined as the free, independent voice of Denver, and we'd like to keep it that way. With local media under siege, it's more important than ever for us to rally support behind funding our local journalism. You can help by participating in our "I Support" program, allowing us to keep offering readers access to our incisive coverage of local news, food and culture with no paywalls.
Make a one-time donation today for as little as $1.