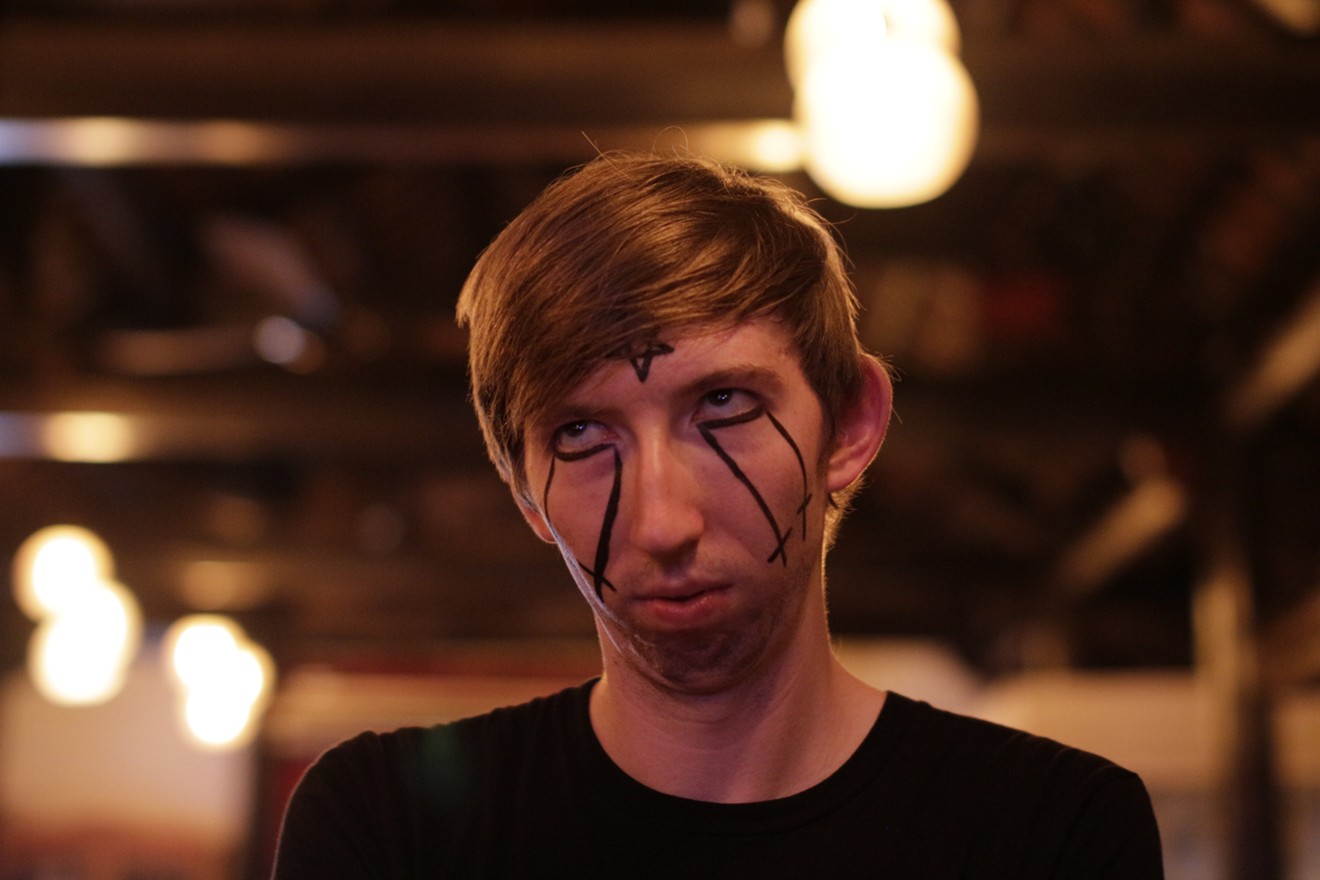 Zachary Jordan, aka Hex Cassette, stares into the void. Duncan McCallum
For Zachary Jordan, aka Hex Cassette, writing dark, synthesizer-heavy dance music is a vehicle for doing what he loves the most: performing. “Life is performance, in some sense," he muses. "You have to perform in your work and act like a different person, you perform during certain relationships, you perform to your family. Life is a performance, and this is just a different kind."

And why did he choose this particularly somber genre of music as a vehicle to pursue his passion?

“The goth thing maybe comes from me just constantly thinking about my death,” explains Jordan, whose next performance will be at the Crypt on January 27, opening for post-punk band Haunt Me. “In a perfect world, I would die on stage. I played this house show, and the room was very tiny in terms of height, and I am not very tiny in terms of height. I really wanted to scalp myself on this ceiling fan they had. But in reality, I will probably stage-dive in some awful bar in Topeka, Kansas, and everyone will be too involved in some football game to catch me, and I’ll fall to my demise.”

As macabre as Jordan presents himself and his Hex Cassette project, the bottom line for any of his shows is providing the audience with a memorable experience. From demands for blood sacrifices to erratic demonic slam dancing, Jordan brings a relentless macabre humor that the Denver scene forgot it needed. “I’m so sick of watching boring bands play boring live shows to boring crowds who are just checking their Instagram. And I wanted to try to make a project that was against all that,” he says.
click to enlarge 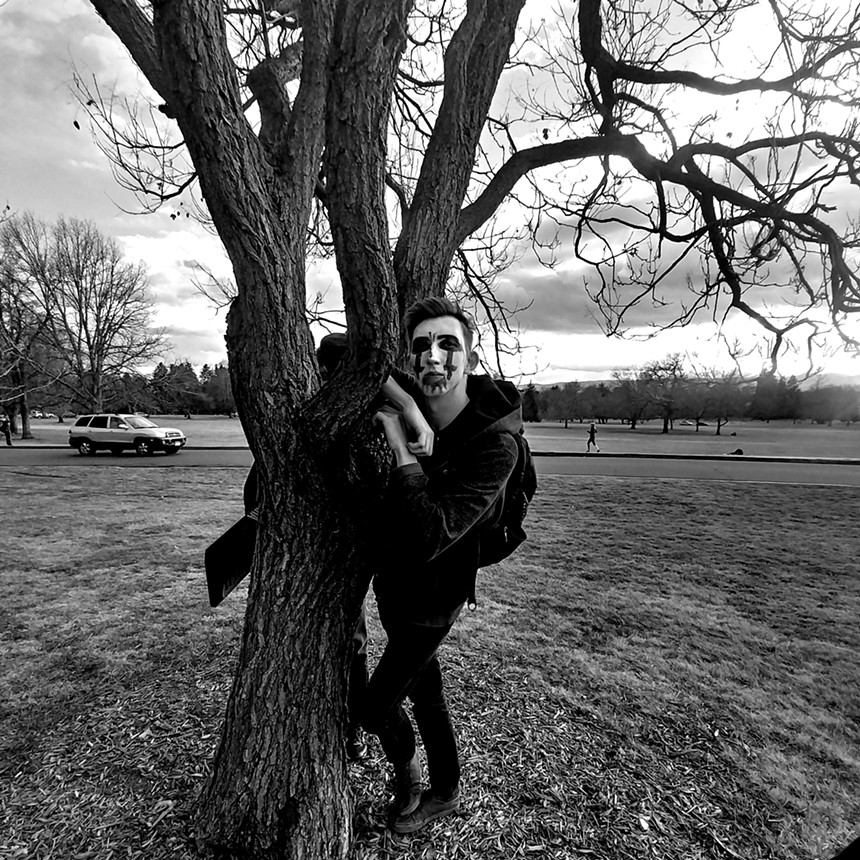 “I grew up on punk and metal. I really liked the energy, [but I was] not particularly interested anymore in making music that sounds like that," he continues. "I got into the goth stuff from high school on, but I love the classic ’80s synth-pop sound. I think it’s one of the last times in popular music history that pop music had some emotion and feeling behind it, and didn’t feel like it was just created in a boardroom to sell things.”

The music he's drawn to is based on the energy between the performer and the audience, as well as a collective acceptance of fate. “I think the type of people [metal] draws have a slightly healthier relationship with death,” Jordan says. “The thing about metal gigs is that everyone who is there, at least the people up front, are truly, actually present there. It’s a kind of cliché, but being in a mosh pit is a meditative experience, because you can’t focus on anything else. You forget that your chances of being maimed are not zero, and you just give yourself up to it.”
Jordan began making electronic music in 2016 after growing frustrated with trying to maintain a full band; he wanted to explore a new way of making music. “I was teaching myself music production while working a night shift at a hotel for about a year. So anytime someone wasn’t coming in actively trying to murder me or something else, I was writing or learning music production. I released the first album a few months after I began learning production, so it was a little rough around the edges," he says. "And by rough around the edges, I mean unlistenable.”

Shortly after that, he hit pause on his music studies and moved to Vietnam, where he spent several years living in Hanoi and backpacking around Southeast Asia. “That was actually where I first really started playing shows. I played a couple tiny shows here and there the years prior, but in my second year in Vietnam, I really began to play shows regularly [as Hex Cassette]. That was 2019,” recalls Jordan, who, in a stroke of luck, moved back to Colorado just a few months before the COVID-19 lockdown. His return trip included a two-day layover in Beijing, just as cases were ramping up. Looking back on that time with post-pandemic hindsight, he believes he came closer to being locked down in China than he realized at the time. “It could have worked out way worse,” he says. 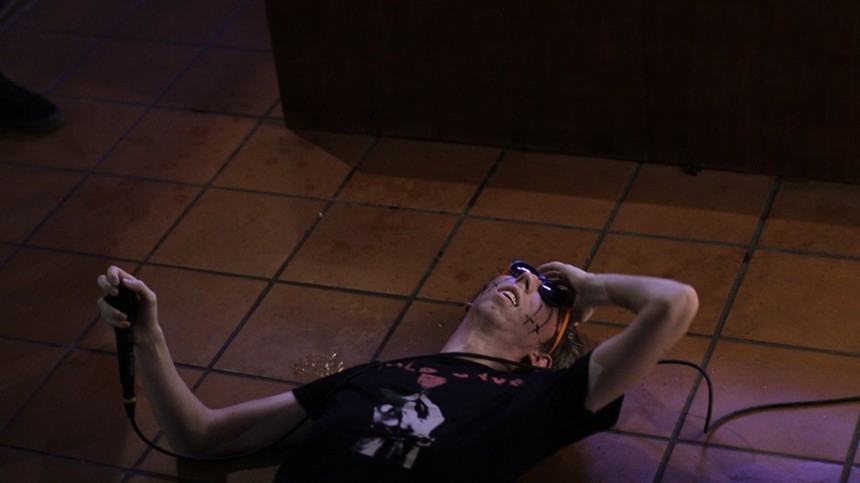 Duncan McCallum
Once back in the States, Jordan rode out the pandemic and took the time to release an EP, Get Out, comprising the songs he wrote and performed while living in Hanoi. After that release, he got to work on a full-length album, using everything he had learned about music production to capture the essence of what he wanted his sound to be. “The first two records I ever fell in love with were Appetite for Destruction, by Guns N’ Roses, and Eiffel 65’s Europop,” he says. “You can’t really understand Hex Cassette until you’ve heard ‘My Console,’ by Eiffel 65. I just want my ‘Blue (Da Ba Dee).’”

While Jordan had become proficient at production, he came to the realization that he needed help to take the record to the next level. So he connected with friend and collaborator Ray Diess, who stepped in as a producer. “I always had it in my head that with a solo project, you have to do everything yourself and be a master of all these things. I had to remind myself that’s not actually how it works, and that’s not how it ever worked," Jordan says. "Most of the good music throughout all of time has been collaborations between a number of people. It was about dismantling that part of my ego and saying, ‘No, you can have someone else come in who has the strengths you don’t.’”

The result is Pomegranate Death, a vibrantly morose ten-track album slamming dark imagery and Jordan’s brooding baritone headfirst into infectious synth pop. While it hasn't knocked down any walls in the dark wave scene as a whole since it was released in June 2022, it is a strong step forward into that world and shows that Hex Cassette came for blood.

Jordan notes that while he loves writing and recording music, it's the performance that compels him. He believes he can help people get over anxiety and fear of failure by showing them how little they actually matter in the grand scheme of things. And when nothing matters, that translates to the dance floor.

“I think people should be constantly reminded that they are meaningless, useless little creatures that are going to die very quickly, and you should at least attempt to have some sort of meaningful experience before that," he says. "I want to bring that experience through ecstatic satanic dance."

Andie Cobb
Admittedly, Jordan has a fascination with death. But through his gloomy retrospection, he channels into Hex Cassette a certain clarity, almost elevating him above the inevitable realization that one day, every one of us will die. “I think people are more afraid of living while they’re here than they are of death, which is nonsensical,” he says.

Looking back on the project since he started Hex Cassette, Jordan finds himself in an interesting place. Coming from the DIY scene, he has always been an advocate for playing house shows and small venues, but 2022 saw him playing gigs at coveted local spots such as the hi-dive and Lost Lake. And the idea of opening for dark wave legends Cold Cave at the Oriental was “unthinkable,” but he did it in December.

Jordan has plans to get back on the road this spring and summer, including his first fly-out show to Los Angeles. But whatever comes down the pipe for Hex Cassette, his ultimate goal is for people to have an unforgettable time at his shows. Or to join his cult. But if cults aren’t for you, then he just wants you to cut loose.

“You don’t need to get drunk to dance — you can just do it," he concludes. "Cavemen danced. We can do it. It’s in our bones.”

Hex Cassette plays the Crypt, 1618 East 17th Avenue, Friday, January 27, 8 p.m. Tickets are $10.
KEEP WESTWORD FREE... Since we started Westword, it has been defined as the free, independent voice of Denver, and we'd like to keep it that way. With local media under siege, it's more important than ever for us to rally support behind funding our local journalism. You can help by participating in our "I Support" program, allowing us to keep offering readers access to our incisive coverage of local news, food and culture with no paywalls.
Make a one-time donation today for as little as $1.