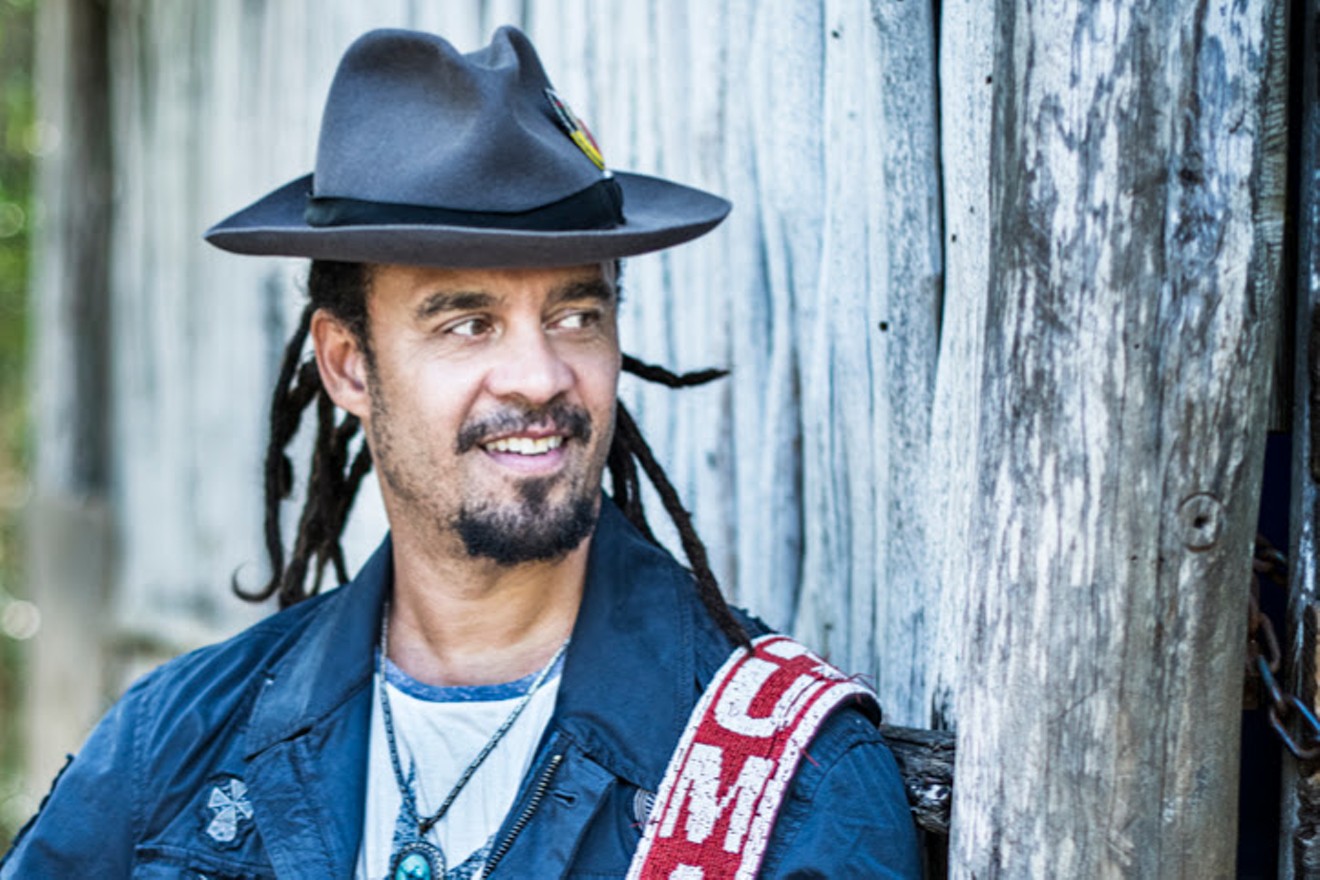 Michael Franti will play the Mission Ballroom on October 18. Jake Blakesberg
Michael Franti discovered yoga in 2001. After a few years of practicing in studios (and later opening a yoga retreat in Bali), he began to invite fans to join him before shows whenever he and his band, Michael Franti & Spearhead, would tour.

“There were, like, three or four people,” Franti says of the turnout at first. “Then it grew to fifty to sixty to seventy and sometimes hundreds of people, so we would usually just find a park."

Franti says the overwhelming response to the pre-gig yoga sessions inspired the Stay Human Harvest Ball, which he'll bring to Denver ahead of his Mission Ballroom show on Friday, October 18. The Harvest Ball is a family-friendly event outside the Mission that he'll host for a few hours before the band takes the stage. The free event features a DJ, an acoustic set by Franti, a live podcast taping, information on climate action, food and, of course, yoga. Franti has hosted Harvest Balls at several cities on tour this year.

“We are super-excited about it,” he says. “We’ve already got confirmation on Facebook that there are going to be thousands of people out there...and it’s all free. I love that interaction that we have with SoulRockers" — the official name of Franti fans — "who come to our shows. We are very excited about doing it in Denver.”

The rapper, filmmaker, singer, songwriter and activist jokes that he knows musicians who hate interacting with their fans. But he says conversations with fans at shows are his favorite part of the job.

The tone of those interactions has changed somewhat over the past few years, however, because of the political division that has gripped the United States. A lot of that division stems from "what cable news channel you watch," Franti says, and has impacted families and friendships.

Franti argues that there's a battle in the world between cynicism and optimism. It’s an issue he addresses in Stay Human, the feature-length documentary he directed and released earlier this year.

“If you look around the world, if you are a thinking person, you see there are issues everywhere,” he says. “There are issues with the environment, police violence, racism, sexism, inequality. There are so many things, LGBTQ issues. The world is in a lot of pain right now.”

He says for many people, the answer is to retreat and ignore the realities of climate change and other issues.

“The optimistic side says, ‘You know, it’s hard out there, but I can still get up with a smile every day,’” Franti says. “‘I can go about my life and make decisions in my life every day that are working toward making a difference in myself or supporting other people who can.' That’s the external."

The internal side, Franti explains, involves focusing on your own well-being and happiness and fighting against depression, anxiety and darkness.

“As an individual, that’s been the battle for me — to not allow myself to go into those dark places,” he says.

Michael Franti & Spearhead released its latest full-length album, Stay Human, Vol. II, in January. Franti says that he usually releases albums every few years, but after the latest record dropped, he and the band started working on another, which will be released in spring 2020.

He's approached music-making differently in the past five years, taking a more collaborative approach as opposed to writing songs and then taking them to the band to flesh out.

“I’m going into a recording session with some people I’ve never met here before,” he says, speaking on the phone from a studio in Nashville. “We are going to see if we can get together and write something cool. It’s very new to me.”

So far, it’s worked out well.

“I thought at first it would take something away from the personal nature of what I write,” he says. “But what I found was the opposite. When I write with other people, there are those moments I’m stuck and I can’t find words to express what I’m feeling right now. They’ve been able to say, ‘Hey, I’ve got an idea,' and we bounce off each other.”

Franti frequently includes Colorado stops on his tours, scheduling a few days off around appearances so he can relax in the mountains and take in some nature. He says he’s excited to take the stage at the new Mission, which "looks incredible."

“I’m always just thrilled to be playing music in this time, when there is so much chaos in the world,” he says. “It’s important to have good reasons for people to come together and celebrate life and connect and dance and release whatever needs to be let go of and be able to walk out a little taller and feel like they can face whatever’s next.”

The Stay Human Harvest Ball happens on October 18 from 3 to 6 p.m outside the Mission Ballroom, 4242 Wynkoop Street. The event is free and open to all ages. Doors to Michael Franti & Spearhead with Devon Gilfillian and Bombargo open at 6, and the show starts at 7 p.m. Find tickets, $52.95 to $99.50, at missionballroom.com.
KEEP WESTWORD FREE... Since we started Westword, it has been defined as the free, independent voice of Denver, and we'd like to keep it that way. With local media under siege, it's more important than ever for us to rally support behind funding our local journalism. You can help by participating in our "I Support" program, allowing us to keep offering readers access to our incisive coverage of local news, food and culture with no paywalls.
Make a one-time donation today for as little as $1.