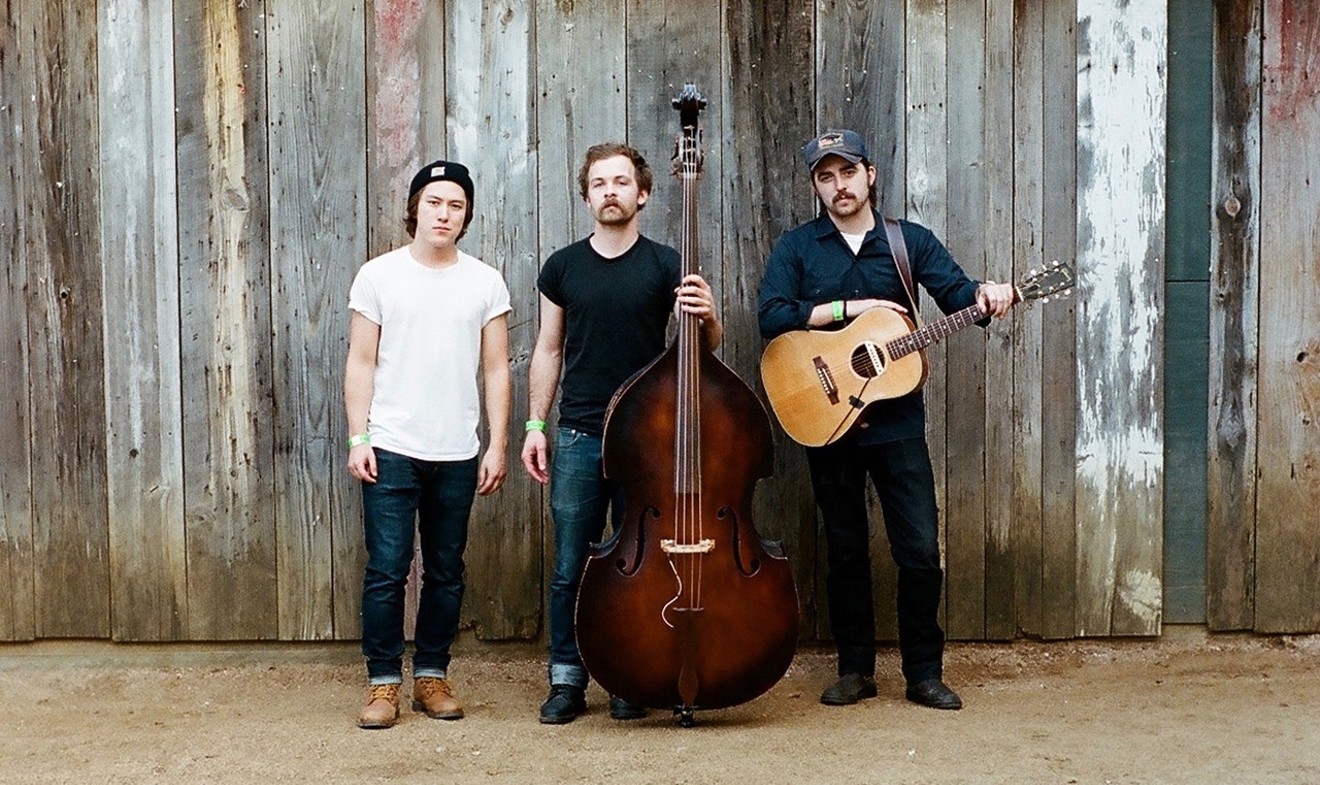 The Michigan Rattlers play Globe Hall on Friday, October 5. Kris Wixom
I used to spend my summers in the Northern Michigan woods in a little place called Good Hart. The closest towns were the affluent resort community of Harbor Springs and the more practical, slightly larger Petoskey. The area is pristine and beautiful but lacking in nightlife. There is a rumor that Iggy Pop played his first show at Club Manitou of Harbor Springs with his fist band, the Iguanas, in 1965, but other than that, the area is not known for its musical history.

Petoskey born and bred, the Michigan Rattlers are trying to change that.

While its members — guitarist Graham Young, upright bassist Adam Reed and pianist Christian Wilder — eventually moved away from Northern Michigan at different points, the lifelong friends eventually reconnected and re-formed the band that is so tied to the place where they were raised. Songs like "Brutus Road," from their 2016 debut EP, talk about driving down the back roads where they grew up and missing home. For someone who reminisces fondly about the area, it can cut deep.

The Rattlers' newest release, their first full-length, Evergreen, combines country, rock and roll and bluegrass, with Young crooning smoothly about missing his Petoskey, love lost and yearning for a place in this world.

We caught up with Young and asked him about Petoskey and his band's new album.

Growing up where you did, it must have been tough playing out a lot where there are not a lot of musical options.

Yeah, growing up where we did was great, but the music scene was nonexistent. My aunt owned a coffee shop, so when Adam and I got a few songs together, she would always let us play there. When we got older, there were definitely bars that they would let us play, and our friends would show up. When we started playing out, we were still kind of learning our instruments.

Did you know you’d have to leave Petoskey if you really wanted to pursue music?

It was definitely a goal to get out. It's basically in the middle of nowhere. The next biggest city is Detroit, three hours away, so it was kind of essential to get out. After high school, we all split up, going different places for college. I moved to Chicago, and I lived there for three years, and Christian went to Boston. After a while, we all finished school and decided to reconnect and get the band back together.

Even though the band has relocated to Los Angeles, you seem to still have a strong connection to the area and write about it quite a bit.

Being away from Petoskey has definitely caused me  to write songs that I probably wouldn't have written had I still been there. I think they're a product of me being older but still getting homesick.

Even though you’ve only been around for a few years, it feels like people have responded to your band quickly.

I think we've been very fortunate. Early on, we were lucky to be written about in some publications that people care about. We were also lucky that we were able to get out and start playing shows pretty quickly, since we started touring with just myself and Adam. Since it was a pretty small operation, it was easy for us to just get out and hit the road and play songs.

A lot of that sentiment seems to be on your new album and first full-length, Evergreen. Tell us more about that.

Yeah, I still write a lot about being away and being homesick. There's a song called "Baseball" on the new album; that's about where I live now. I was back home over the holidays and was thinking about my new surroundings and what that means. The sunshine [in L.A.] is great, but it doesn't make everything great all the time.

Michigan Rattlers w/ Shovelin Stone, HERESTOFIGHTIN, 8:30 p.m. Friday, October 5, Globe Hall, 4483 Logan Street, $10 to $12.
KEEP WESTWORD FREE... Since we started Westword, it has been defined as the free, independent voice of Denver, and we'd like to keep it that way. With local media under siege, it's more important than ever for us to rally support behind funding our local journalism. You can help by participating in our "I Support" program, allowing us to keep offering readers access to our incisive coverage of local news, food and culture with no paywalls.
Make a one-time donation today for as little as $1.