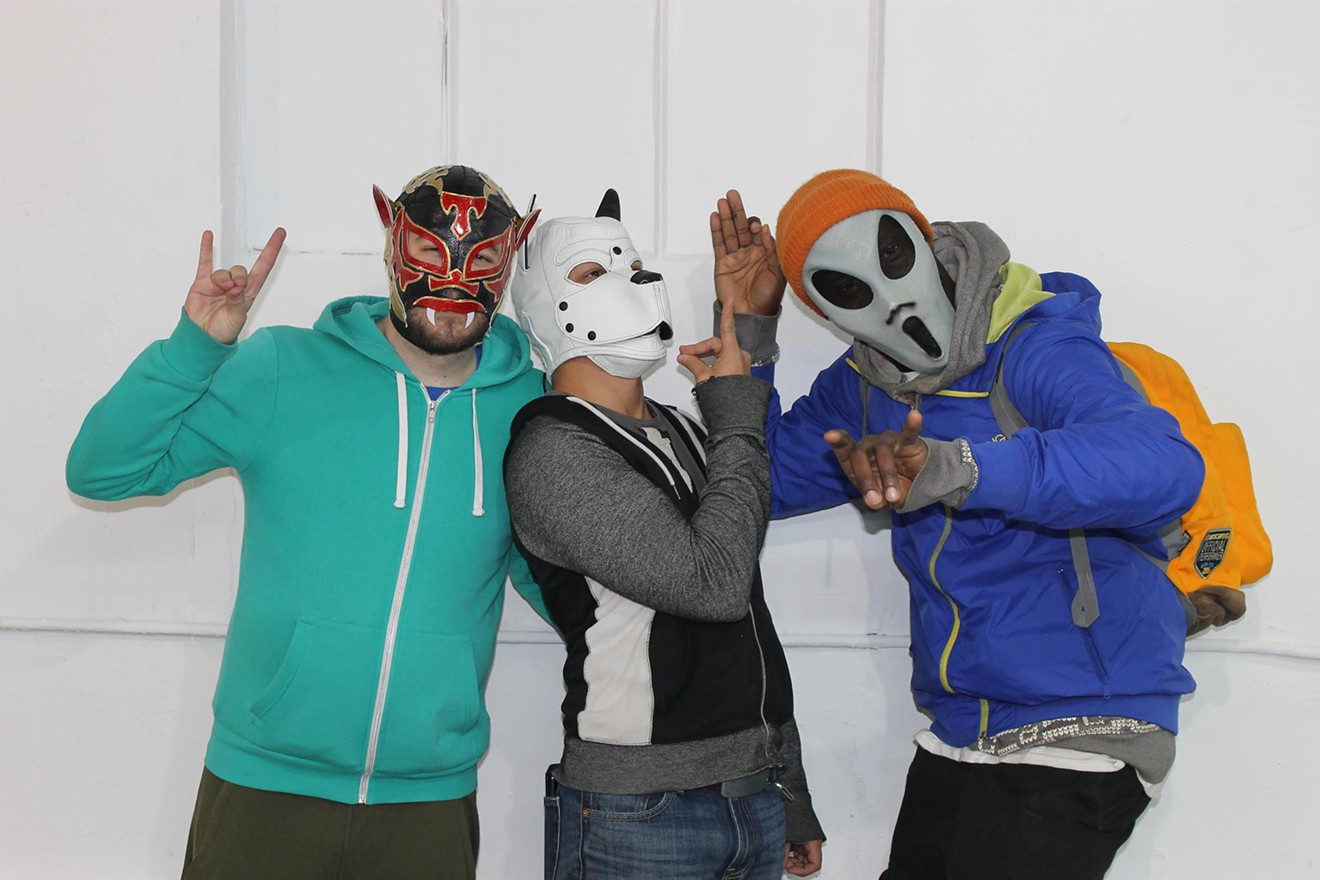 "Felix and I started performing shows together — not as a group, but separately — at Lion's Lair for DJ Bunchagrief's monthly show," Kriegler explains. "Danny and I met at Lost Lake, and I was enthralled, because Danny's performance was awesome. Through the years, we started to work together individually, and then as a group; that idea started to form at DEF CON, which is a hacking convention that happens in Las Vegas.

"The three of us were all performing there and just started to get more of a camaraderie," he continues. "It was fun, and we just started talking about opening up this project that Danny and I were working on and making it the three of us."

The next year, in 2019, they returned to DEF CON, but this time as a group called Secret Dog. True to their nerdy origins, they borrowed their band name, "Secret Dog," from a Dungeons & Dragons campaign Culp was playing with some friends.

The name is fitting for a trio that makes "semi-avant-garde nerdcore music, or electronic avant-garde rap," according to Ayodele.

On January 15, the group will release its debut album, Thumb. Middle. Ring., on Bandcamp.

All three members come from wildly different backgrounds, but overlap in their shared inspirations of vintage video games and underground electronic artists. Culp is a classically trained violinist who discovered a love of Icelandic experimental musicians and IDM artists like Aphex Twin and Squarepusher in his late teens. Ayodele also counts Squarepusher and Aphex twin among his primary influences; he first bonded with Culp over their enjoyment of obscure underground artists. Having grown up breakdancing, Ayodele also has deep roots in hip-hop, which is where he and Kriegler connect.

"A lot of my influence came from video games. And being the age I am, I grew up with the Nintendo Entertainment Systems, Sega Master System, back in the time when music was 8-bit. That stuff stuck with me throughout the years," says Culp.

"All of the melodies that I was hearing from those popular games got stuck in my head," says Ayodele, "and still bleed through my music currently."

On, Thumb. Middle. Ring., the 8-bit influence shines, but the album is also a testament to the incredible range of these three artists, who did all the beatmaking, mixing and mastering themselves. Electronic synths and gorgeous instrumentals meld flawlessly on their own, or as a backdrop to Secret Dog's emotionally charged political lyrics.

Thumb. Middle. Ring. is not the album Secret Dog set out to make when the bandmembers started recording at the music-education nonprofit Youth on Record in late 2018, but they were compelled to change course because of increasing political tensions.

"Orignially we were thinking of doing a concept, story type of album, which would have started with the song 'Into the Woods,' but that's the only song we kept," explains Kriegler. "A lot of my motivation for not going in that direction was the political climate, our now-ex-president. I wanted to touch on topics that were happening and how they made me feel. And there are some fun songs that we threw in there that I think add a really nice sense of levity, but most of it for me was just being fed up and wanting to write about it."

Secret Dog doesn't shy away from confronting issues like climate change, pollution or families being separated and incarcerated at the Texas-Mexico border. The bandmates' frustrations with the state of the world are palpable, but don't detract from Thumb. Middle. Ring. being an enjoyable listening experience. The album is rich with guest appearances from rising underground names including fantastic Denver artists Stoney Bertz and Damn Selene.

Just as the band was putting the finishing touches on the album, Secret Dog faced a major setback: COVID-19.

"We were needing to add a verse or something, and then just do mixing, and then COVID happened, and we were locked out almost half a year, maybe more," explains Kriegler. "So our album just sat there, which was really lame, but not at all by fault of Youth on Record. They're a school and have to follow guidelines. But we were fortunate enough to be able to go back and get that taken care of, and I think that was in October 2020. And then the rest of the process was pretty quick."

Eager to get back into the groove of live performances, Kriegler recalls Secret Dog's first-ever live show, back in 2018: "Our first show was at the Marquis Theater, and that was with Shing02. We had practiced a few times before that, but us being on stage was just a really wonderful feeling, to see everything meld together. Just seeing them start playing and watching the crowd react was stellar."

The return to full-sized live shows may still be a ways off, but Secret Dog is already planning to have an in-person album-release party whenever it's safe. For now, the musicians are working on two animated music videos, tentatively scheduled to be released in late spring or early summer, as well as vinyl and other merchandise. Catch the trio performing at livestream events, including Live From Home 2021, a monthly online show, on February 6.

Secret Dog's debut album, Thumb. Middle. Ring., is available now for purchase on Bandcamp. The group's next live performance will be Live From Home on Twitch, at 7 p.m. Saturday, February 6. The lineup includes Stoney Bertz and Damn Selene, as well as Mark Cooper and Shubzilla + Bill Beats.
KEEP WESTWORD FREE... Since we started Westword, it has been defined as the free, independent voice of Denver, and we'd like to keep it that way. With local media under siege, it's more important than ever for us to rally support behind funding our local journalism. You can help by participating in our "I Support" program, allowing us to keep offering readers access to our incisive coverage of local news, food and culture with no paywalls.
Make a one-time donation today for as little as $1.