How the Bombpops Landed With Fat Wreck Chords 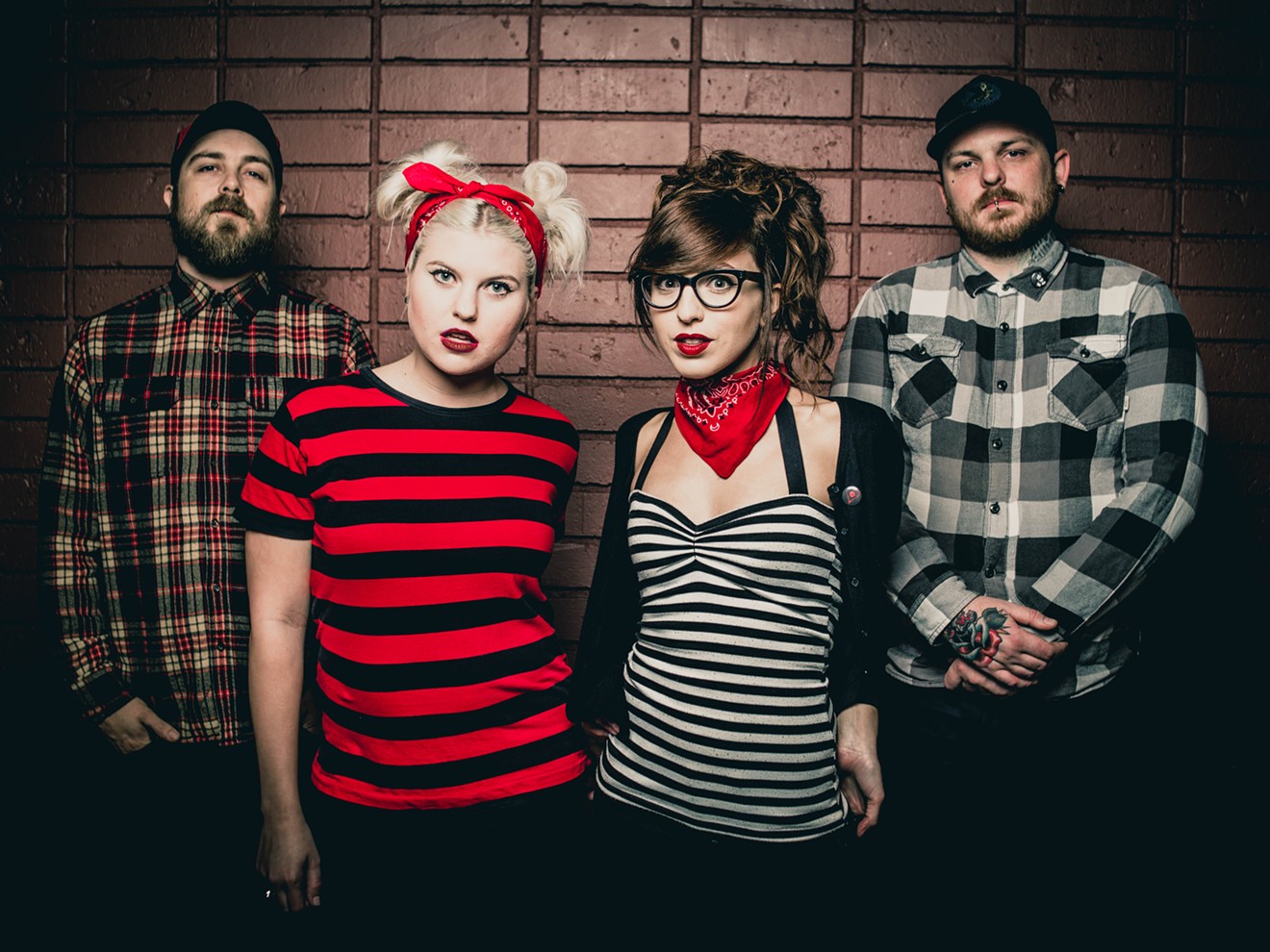 The Bombpops with Jan Razavi, second from right. Courtesy of Fat Wreck Chords
There are band names that mean basically nothing, and then there are those that describe the music perfectly. Essentially, for every Smashing Pumpkins, there’s a Bombpops.

The moniker is absolutely appropriate: The music of the pop-punk crew is abrasive and gloriously obnoxious, and also sugary sweet, blessed with the most infectious melodies. It’s like fiberglass in your cotton candy. Push-pins in your strawberry ice cream. Drano in your chocolate milk. You get the point.

It’s been a journey. Co-guitarists and vocalists Jen Razavi and Poli van Dam formed the band a decade ago, but finding a rhythm section took time. Three drummers and six bassists have passed through the ranks, though the current pairing of Josh Lewis and Neil Wayne seems to have finally filled the role.

Razavi said that she and van Dam were fortunate to find Lewis and Wayne, as the men had already been playing together for years before joining the Bombpops. Essentially, the rhythm section was finely tuned and ready to go.

“We’ve been the Bombpops for about ten years, but we really weren’t the Bombpops until we got these guys in the band,” she says. “Poli and I have been playing music for a long time together. We have this unspoken thing of what to do when we’re writing, when we’re practicing. Josh and Neal actually grew up together in the same town. They’ve been playing music together since they were ten, so they know each other. They’re this locked-in, perfect rhythm section, where they know how to communicate the way Poli and I know how to communicate. So we got really lucky with that.”

The Bombpops released three EPs between 2010 and 2015, but their debut full-length album, Fear of Missing Out, only came out this April, on Fat Wreck Chords. Razavi says that they are extremely happy with the response that they’ve been getting from fans and critics, as well as from label-head Fat Mike (of NOFX).

“We knew that we loved it, and that’s one thing,” she says. “Still, before the record came out, you never know how it’s going to be received by people. The responses to the record have all been really fantastic. That’s the biggest thing you want as a band. You want people to like your record and tell their friends about it. We wrote the best record we could write.”

For the longtime fans of NOFX and the whole Fat Wreck roster, the Bombpops signing onto Fat Mike’s loved and respected punk label was a dream come true. Indeed, they had achieved a very direct goal that they had set for themselves.

“It’s completely where we always wanted to be,” Razavi says. “I knew that I wanted to be in a band on Fat Wreck Chords. I knew that, Poli knew that, and those guys (Lewis and Wayne), growing up in a different town and a different part of Southern California, knew that as well. It’s really cool. It feels exactly like the home we should be with. There was nowhere else for our debut album or for our band to be with at this point in time. It was meant to happen.”

On May 7, the Bombpops headline at the hi-dive, and Razavi says that the group is excited to get back to the city where they recorded Fear of Missing Out, produced by Chris Fogel of the Gamits at his Black in Bluhm studio.

“We stayed at his house with him and his wife, and stayed in their basement,” Razavi says. “We stayed in Denver for two weeks, hunkered down and made this record. In 2015 we did a European tour. It was like 26 dates, and we didn’t play with any bands that we knew. Then this one show in Paris was a festival, and we were playing with the Gamits. We got so stoked. That night, we met them and we just hit it off. The Bombpops and the Gamits were instant best friends. Chris Fogel was the shoo-in choice to produce. We live in Los Angeles, and there are a million people you could make a record with, but if we stay in L.A., we get distracted. It was really crucial that we were there and 100 percent into this record.”

This will mark the Bombpops’ live debut in Denver, and Razavi says that we can expect a lot of songs from the new album. After ten years as a band, playing the same songs for much of that time, they’re delighted to have some new material to pull from. The fact that the album is a fresh blast of sweaty energy means that local punk fans can be delighted, too.