Twelve Events on the Culinary Calendar, Including Freebies for Veterans

The Impossible Burger, as served at Hopdoddy. Mark Antonation

Veteran's Day is this Saturday, so military personnel will want to pay particular attention to this calendar for four great deals. The rest of us should tune in, too; there are plenty of eclectic (and some downright odd) food and drink events from Friday, November 10, through Sunday, November 12. Here are our top twelve picks, plus six more to plan for.

Rebel Restaurant becomes an Asian-inspired eatery for the next month under guest chef Gary Kim.
Westword
Friday, November 10
If you've been to Rebel Restaurant, 3763 Wynkoop Street, you know that chef/owners Dan Lasiy and Bo Porytko can get a little eclectic with their offerings — if "a little" means a boatload and "eclectic" means really freakin' crazy. For an entire month, they're bringing help to up the crazy: Visiting chef Gary Kim — of Anju Noodle Bar in Maine — will present a Korean-inspired menu beginning Friday, November 10, and running through December 10. Contact Rebel at 303-297-3902 or check the restaurant's Facebook page for details. Here's Kim's full menu:


MCA Denver is going all in on cupping — of both varieties — on Friday, November 10. Join the Museum, 1485 Delgany Street, for happy hour starting at 5 p.m., followed by the main event at 7 p.m., where tipsy patrons can attempt to describe the nuances of coffee (do you taste Band-Aids, tamarind, drywall?) while having suction cups applied to their bodies (shades of The Princess Bride). Think this description sounds bizarre? The actual event is sure to be even weirder. Admission is just $5 for non-members (free for members), but MCA events fill up quickly, so show up early for this one. More info is up at mcadenver.org.

Legendary Northside joint Gaetano's, 3760 Tejon Street, has been celebrating its seventieth anniversary this week, culminating in events on Friday, November 10, and Saturday, November 11, that pay homage to the restaurant's illicit past. Don't miss Friday's Mob Night, when you're encouraged to don your best Don's suit and show up for live music, burlesque and throwback cocktail specials all night. Saturday festivities start at 11 a.m. with the Mobster Brunch and lauded Bloody Mary bar until 3 p.m.; take a quick break for a costume change and return in formal attire for the evening's gala, when birthday cake will be passed out to dinner guests with, yes, more cocktails. See gaetanositalian.com for details on the celebrations. 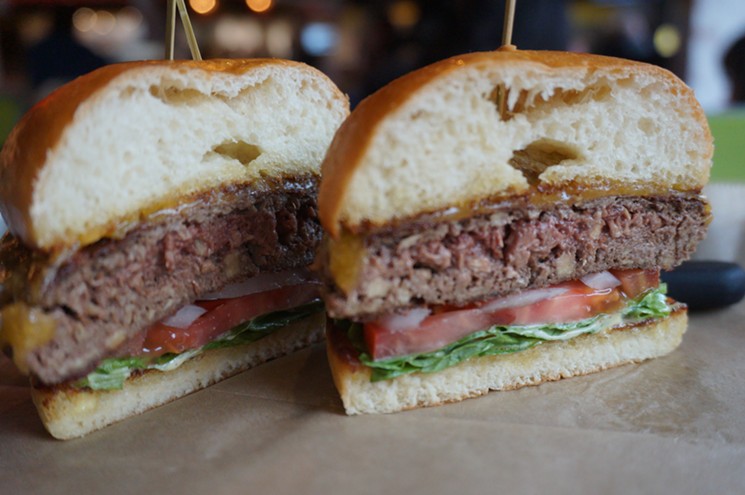 The Impossible Burger, as served at Hopdoddy.
Mark Antonation
So you like meat, but you're troubled by the idea of cows dying for your dinner. Or, your doctor (that buzzkill) said no more red meat, but you're craving something juicy and red. The folks at Impossible Foods have your burger needs in mind. They've invented a faux ground beef that's incredibly realistic in texture, flavor and color (we know, because we tried one at Hopdoddy Burger Bar — just see the pic above). And on Friday, November 10, and Saturday, November 11, the company wants you to give the Impossible Burger a go. Try it for free when the Impossible Burger Tour comes to Denver. On Friday, stop by the University of Denver's Driscoll Green (near 2055 East Evans Avenue) from noon to 6 p.m. (or until burgers run out). Or go to the north plaza of Union Station (1701 Wynkoop Street) on Saturday, also from noon to 6 p.m., while supplies last.

If you've never had a pupusa, what's your deal, man? Set things right at Aurora's Pupusa Festival.
Mark Antonation
Saturday, November 11
The local Salvadoran community will be out in force at the Pupusa Festival, a family-friendly cultural get-together anchored by what might be the Central American nation’s most popular export: fat, delicious pancake-like tortillas stuffed with cheese, meat or beans (sometimes all three at once) and served with salsa and a spicy pickled cabbage slaw called curtido. Hosted by the Eco Folklorico Cuscatlan dance group and Aurora’s multicultural Village Exchange Center, a nonprofit serving area refugee populations, the fest offers a mini-taste of pupusas and other Salvadoran dishes, dance performances and games, and will take place at the Village Exchange Center, 1609 Havana Street in Aurora. Immerse yourself in a new culture on Saturday, November 11, from 11 a.m. to 6 p.m.; admission is free. Learn more at visitaurora.com.

Saturday, November 11, is Veteran's Day, so check out this quartet of food freebies for veterans:
If you're active duty or retired, show up at Hopdoddy Burger Bar, 1747 Wynkoop Street, for a free burger on the house. The joint's doors open at 11 a.m., and vets are welcome until it closes at 10 p.m. No word whether the recently released Turducken burger special (a chicken, duck and turkey patty with cranberry sauce and fried green beans on a stuffing bun) will be included in the promo (word on the street is that it's amazing), but even if it's not, all Hopdoddy's burgers are delicious, so you really can't go wrong.

Both locations of The Post Brewing Co. (105 West Emma Street, Lafayette or 2027 13th Street, Boulder) and its two sister eateries, the Post Chicken and Beer (1258 Hover Street, Longmont and 2200 South Broadway), are giving away two pieces of some of the town's best chicken and a can of beer to veterans. The deal will be available at the Boulder location from 4 p.m. to close and at the other three Post outposts during brunch, from 9 a.m. to 3 p.m.

Eight Colorado Zoe's Kitchen locations are offering a free entree to active-duty service members and veterans during regular business hours from 11 a.m. until 9 p.m. Just make sure you remember that all-important military ID to cash in on the deal.

Veterans who provide proof of past or current military service can get a free entree at any of the Tavern locations; see the Tavern website for locations and hours.

We've written about SAME Cafe's mission before: No one who comes through the doors of the nonprofit restaurant will be denied food based on their ability to pay. Customers pay what they can, and those without money can volunteer in exchange for a fresh, mostly local and organic meal. But even nonprofits have financial obligations. That's where SAME's Seasonal Meal fundraiser comes in. On Saturday, November 11, $40 will get you a four-course dinner at the normally lunch-only spot at 2023 East Colfax Avenue. Seatings begin at 6:30 p.m., and while the menu isn't yet available, previous meals have included creative dishes like radishes with butter, bacon and pickled mustard seeds, as well as grilled leeks with pistachio yogurt. Find out more and reserve your spot at soallmayeat.org.

Fire spinners and beer: What could possibly go wrong?
Brandon Marshall
There are quite a few reasons to check out Left Hand Brewing Company’s Nitro Fest on Saturday, November 11. First and foremost, there’s the beer. The fest is only pouring nitro beers, whose creamy, smooth-as-silk texture will lure fans of the particular style like moths to a flame. More than forty breweries from around the globe (including outfits from Japan, China and South Korea) will be pouring pints ranging from classic cool-weather ales such as milk stouts and barleywines to the frankly bizarre-sounding piña colada pale ale and a nitro Berliner Weisse. The event’s circus acts, fire spinners, jam band/EDM mashups and costume contest should also entice plenty of free spirits to make the trek to Longmont, where the fun happens at Roosevelt Park, 700 Longs Peak Avenue in Longmont, from 6 to 10 p.m. Tickets start at $75 ($45 for DD) at lefthandnitro.com, where you can also find inspiration for this year’s costume theme. Don’t want to get stuck in Longmont overnight? No worries — you can get round-trip transportation from Denver for an additional $40. Cheers!

There's a reason store-bought tomatoes don't taste like heirlooms.
Linnea Covington
Sunday, November 12
Anyone who has never grown tomatoes in their back yard (and let's be honest, that's most of us) has no idea what a tomato is supposed to taste like. We're resigned to grocery-store fruit, which — even if they're plump and vermilion and purchased at the height of summer — have the texture of al dente pasta and taste of...nothing. If you're interested in how all tomatoes came to be winter tomatoes, go see biochemist Harry Klee's Sunday, November 12, lecture at Lory Student Center in Fort Collins: "Why Don't My Tomatoes Have Any Flavor?: A Case Study in Industrial Agriculture." From 3:30 to 5 p.m., the former Monsanto scientist will address just that question, as well as current approaches to improving tomato flavor. It's a bit of a drive, but it's free and will prove fascinating to anyone interested in industrial food development and production. Get more information at colostate.edu, then start planning your summer veggie garden ASAP.