Guns of Guns N' Roses Is Back With L.A. Guns and Firing on All Cylinders 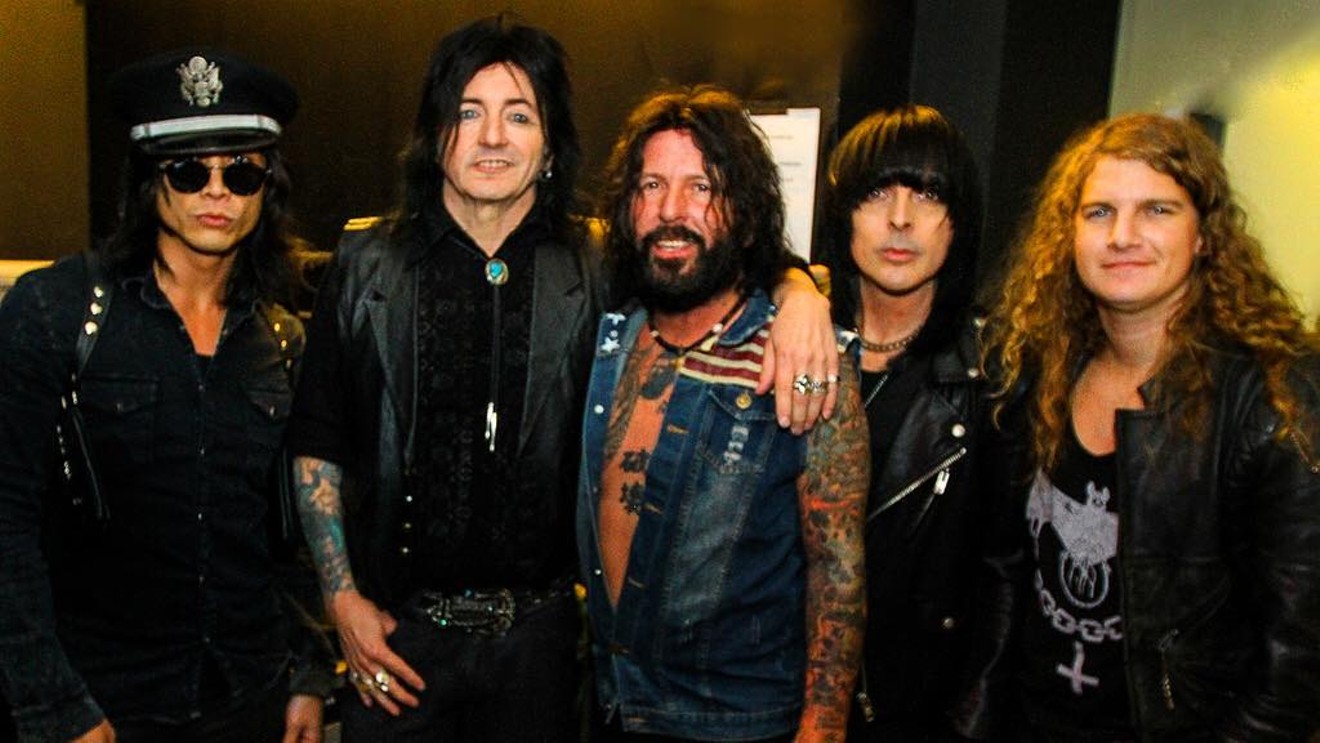 L.A. Guns with Phil Lewis, second from left, and Tracii Guns, center. Ron Lyon
The history of the L.A. Guns is nothing if not storied. The band formed in 1983 amid the riotous Hollywood sleazy hard-rock scene, and one year later merged with another band, Hollywood Rose, to form Guns N’ Roses. When guitarist Tracii Guns left the fledgling Guns and Roses in ’85, he re-formed L.A. Guns with singer Paul Black. In 1987, the band recruited singer Phil Lewis from British hard-rock group Girl. The band put out a self-titled debut album that went gold, and major-league success beckoned.

The sophomore effort, 1989’s Cocked & Loaded, cemented the band’s standing as one of the big players in the L.A. scene, thanks in part to mega-MTV hit “The Ballad of Jayne.” But then, as the 1990s kicked in and brought grunge with it, the popularity of the L.A. Guns (and just about every other leather-and-spandex-clad hair band on the Sunset Strip and beyond) began to wane. The albums dropped in quality as in-fighting took over, the climax being 1994’s Vicious Circle album, an attempt to stay in favor by hardening the sound, hampered by members dropping out and falling in again like tiles in the game “Guess Who.”

And so it was for the next twenty years. Guns left the band, then rejoined. Lewis left the band, then rejoined. Albums were released with one or the other missing. At one regrettable point a few years ago, and sadly predictably, there were two versions of L.A. Guns on the circuit (original singer Paul Black even joined up with Guns again around 2007, but that didn’t last long). Guns and Lewis would occasionally hook up again (notably for 2002’s excellent Waking the Dead album), but it never lasted. Now, after fifteen years apart, the duo is back together. Who knows what’s gonna happen? Lewis is optimistic.

“It’s going really good,” he says. “Tracii and I are getting along really well now. We’re both really focused on the same goals. We’re working on new songs. The new record sounds good, and the old songs sound great live. We’re mixing it up a lot now. The Whisky a Go-Go offered us Friday and Saturday in March, and then Vamp'd in Vegas has offered us the same deal. We like that, because we have enough songs. We’ve got enough albums and enough material. We do deep cuts in every set, but we really have enough songs to pull off a two-night residency playing a different set both nights, and I’m looking forward to that.”

Of course, these things are never simple. The band is being billed as “L.A. Guns’ Phil Lewis & Tracii Guns,” a bit of a mouthful when one would imagine that simply calling it “L.A. Guns” would suffice.

“It’s just to let people absolutely know without a shadow of a doubt exactly what they’re getting,” Lewis says. “Hopefully, after six months to a year, we can just go back to calling it L.A. Guns. Right now, it’s a big deal. We haven’t played together in fifteen years. Time does fly — I’m sixty. When I was thirty, I thought I was so fucking old. I couldn’t have been more wrong. Six months later, I joined L.A. Guns. I’m not gonna let numbers dictate. You’re supposed to act a certain way at a certain time. I’ve been lucky health-wise, so I keep doing it.”
So far, so good then. Lewis says that he and Guns are getting along and that, in fact, there were never major personal problems between them, but rather between Guns and other classic-lineup members. The singer considers Guns to be like his little brother, and sometimes siblings argue. Hopefully he’s right, and the soap opera nonsense is behind what is a superb rock ’n’ roll band. The pair has certainly pulled in some solid musicians to back them.

“We have Tracii’s drummer that he’s been working with for the last year and a half, Shane Fitzgibbon. With Johnny Martin on bass, that’s just a great rhythm section. Tracii’s been going out with those two and another singer doing L.A. Guns stuff, and it’s been perfectly adequate. But now we’ve got Michael Grant. It’s back to two guitars, and it’s fierce. They’re doing a lot of damage.”

This new lineup with the core duo is halfway through the recording of a new album that should see the light of day in the summer. Lewis is audibly excited when talking about it.

“It sounds amazing — I’m not exaggerating,” he says. “It’s so slick, and every song is so well-crafted. Big choruses. It’s really interesting, and I think people are going to be knocked out by it. We’re gonna release it on CD and digital, of course, but we’re gonna put it put on vinyl. We have enough to put it out on double vinyl gatefold.”

On February 18, the band plays Herman’s Hideaway. Lewis says that he’s enjoyed all of his previous visits to our region and is ready to kick out a killer set this time.

“You’ll definitely get the nuggets — ‘Electric Gypsy,’ ‘Sex Action,’ ‘Never Enough’ and ‘The Ballad of Jayne’,” he says. “We’ve been trying to put as much as we can — a song from Vicious Circle, a song from Waking the Dead. We’ve pretty much got a song from every record that me and Tracii have done. So, yeah, it should be interesting.”

After that, L.A. Guns (we refuse to call this anything else) will finish up the U.S. dates, then head to Lewis’s native U.K. for a tour in March. A few dates around Europe will follow, and then it’s back to the studio to finish the record.

“This new record is going to really keep us busy,” Lewis says. The label is getting right behind it. If I think things are busy now, we’re going to get into hyperdrive in the next couple of months.”