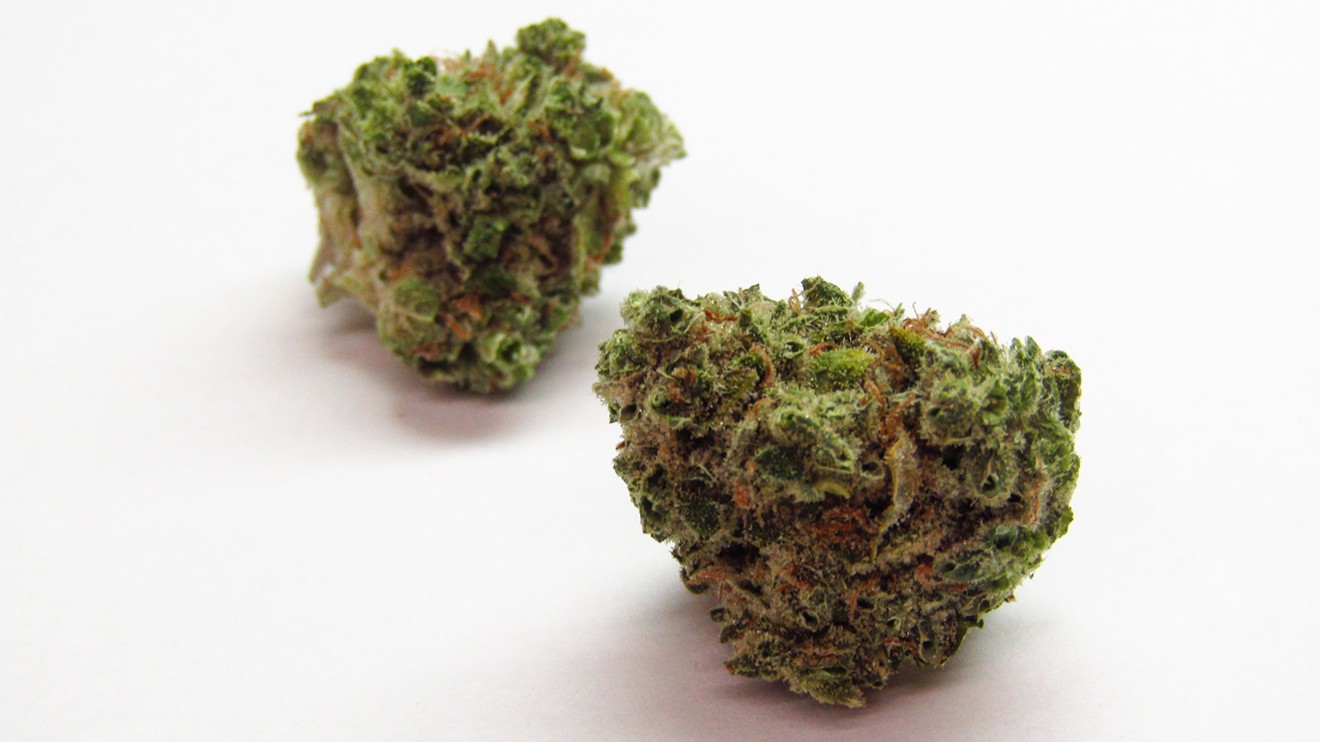 Don't expect to have a full deck after smoking Ace High. Herbert Fuego
Go Fish was my only real dive into card games. Poker requires too much patience, and my blackjack skills tend to unintentionally piss off the rest of the table. To top it off, I'm a terrible shuffler. My grandma, a legend among local bridge and gin rummy circles, would jump out of her grave if she knew this, but I hoped a joint of Ace High would get me on the right track to winning the pot instead of smoking it.

A cross of Star Dawg and a Lemon G phenotype from the Midwest, Ace High (also known as Ace's High) is a Colorado product from Greenpoint Seeds. Star Dawg, an early child of the infamous Chemdog, has always given me an aloof, giggly and unproductive high, while Lemon G (not the 1:1 CBD version, but the original) has always made me feel upbeat and talkative. More interested in the clash of characteristics than the strain's smell or flavor, I pre-ordered an eighth sight unseen to see how this combination would unfold.

Opening the bottle of Ace High released a blast of classic cannabis scents, hitting me in the face like a snake popping out of a fake mixed nuts jar. The balance of the two lineages made the aromas hard to rank in terms of power, though, with notes of kerosene, lemon-lime and skunk each taking turns. A few light tokes showcased the same steadiness in flavor. We'll call those two rounds a draw.

Ace High's effects were all Star Dawg, though, as if I ever would have thought otherwise. Lemon G is a great strain with national prominence, and its influence on Ace High provides a welcome citrus twist to Star Dawg's gassy flavors. But the pride of Ohio just can't compete with those dominant Chemdog genes once the flower is smoked. I drifted to space after my first hit of Ace, and stayed there for the rest of the day. My physical energy wasn't totally gone, though it did slowly fade for several hours. Mental capacity, however, was microscopic from the start and never returned.

Upon some stoned introspection, I'm not sure I'm built for the tables. Movies make a game of baccarat seem like a heavyweight boxing watch, and the action here is exaggerated in similar fashion. No one's going all in on a bluff or throwing haymakers with their chin, whether that be at the card table or in the ring. Yet Ace High might make me stoned and stupid enough to try either on the right night, especially after watching a half-hour of Rounders or Casino Royale.

We've only seen Ace High at Ascend Cannabis Co. and Kind Love, with several seed banks selling the strain to home growers, too.

Looks: Short plants and dense buds give Ace High an indica look despite heavy Chem influences, but the nuclear-green color and heavy resin production are a chip off the gassy block.

Smell: Skunky and sour with pool-chemical-like overtones, Ace High's aroma carries an underlying sweetness that adds citrus and green-apple characteristics to the mix, providing just enough fruity notes to make me forget I'm about to smoke something with Chemdog in it.

Flavor: A Kush-like, earthy taste accompanies the fuel flavors, which overpower those sour citrus notes for most of the hit. But the lemon comes through at the end, and lingers afterward.

Effects: Too debilitating on the mind for daytime but not physically relaxing enough for late at night, Ace High is strictly for laid-back evenings...or a New Year's hangover. I was incapable of having conversations or even answering questions in more than five words. The brain fog was too strong for my taste, and the physical effects too weak.