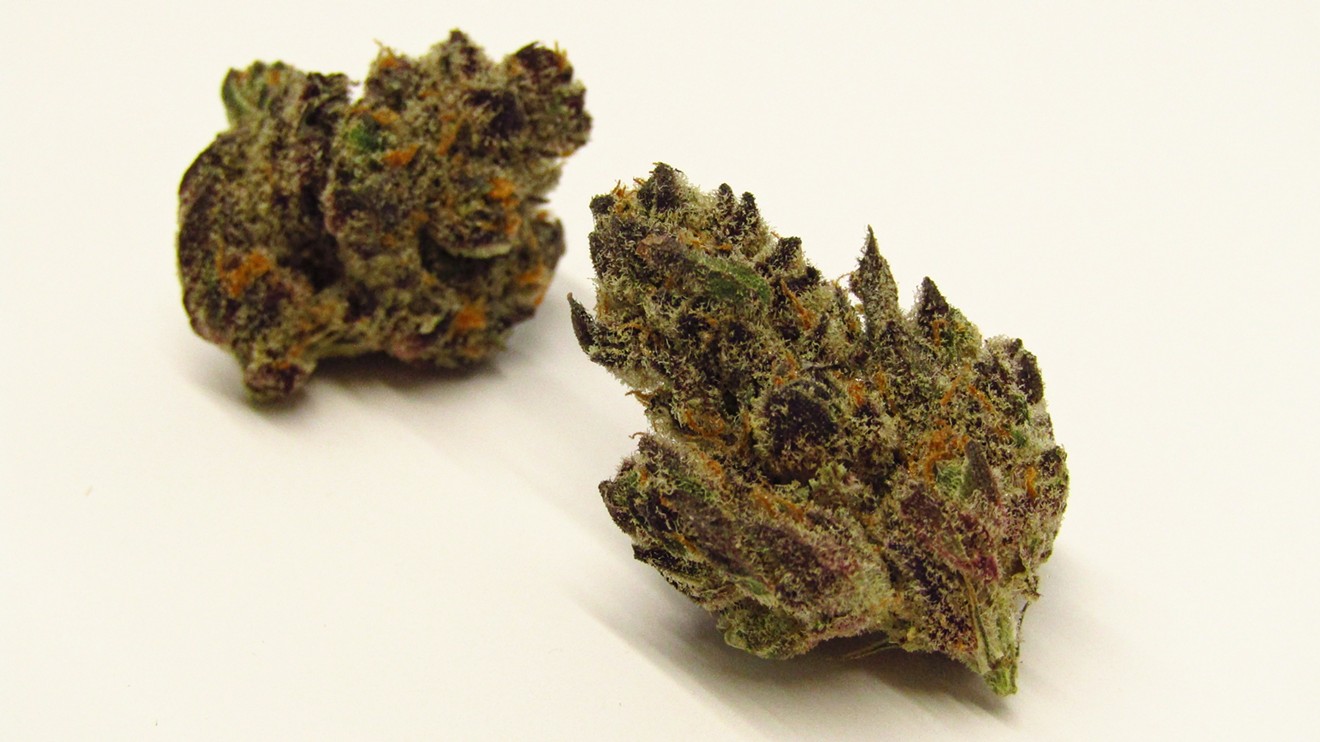 Blood Orange’s aroma reaches our high expectations. Herbert Fuego
For better or worse, citrus characteristics tend to dominate cannabis aromas, and I've inhaled notes of grapefruits, lemons, limes, oranges, tangerines and so much more inside of a weed jar. Telling me that I'll not only smell but taste a blood orange, though? That's a bold strategy, Cotton. Let's see if it pays off.

There are several cannabis varieties named after the blood orange, but the most popular version in Colorado bears Orange Zkittlez and Tropicana Cookies genetics. We're lucky to have the newer version, because the Colorado Blood Orange packs some of the most impressive and specific fruity aspects I've experienced in a long time.

Blood oranges get their color from anthocyanin, a pigment common to plants but rare in citrus. Caryophyllene, a terpene known more for spicy aromas than anything sweet, is essentially the anthocyanin of the Blood Orange cannabis strain, tying together lesser amounts of limonene and linalool — two terpenes with a much stronger connection to citrus fruits than caryophyllene — to create a vivid flavor instantly reminiscent of a juicy crimson orange.

Most citrus-forward strains are associated with daytime use, and you could very well do that with Blood Orange. My brain doesn't miss a beat after a bowl or two, and the munchies are relatively light. My limbs always get heavy, though, and those hybrid effects like to stick to my legs for a while. If you want to stay active this summer, save Blood Orange for an evening spent inside.

Looks: Don't expect any deep red spots on Blood Orange's flower — even the pistils are orange — but don't expect a ton of green, either. Dark, purple calyxes engulf the buds like a never-ending blob, leaving little spots of forest green fighting to survive. Blood Orange varieties from other states aren't nearly as purple as the Colorado version, but the color is still common.

Smell: Blood Orange's citrus notes might as well come from slices of the fruit itself. The push and pull of sharp oranges and sweet raspberries is so fruity that my eyes almost water as I wonder if my allergies have been activated. Dank, skunky, earthy or any other "weed" smells are virtually nonexistent up close, bowing down to the blood orange — though an open jar would probably still raise some eyebrows.

Flavor: Color me surprised: Blood Orange's flavor holds up in the smoke, whether it's coming through a dirty pipe or a half-burnt joint. Sour, sweet hints of citrus and raspberries cling to my tongue and cheeks from start to finish, leaving little imagination for anything in between.

Effects: My energy isn't empty after smoking Blood Orange, but I'm definitely not running on a full tank, either. The even-keeled high isn't disorienting and leaves enough wit to carry along a conversation, but the physical effects snowball after thirty minutes and only get stronger from there.

Veritas is responsible for most, if not all, of the Blood Orange flower out there outside of Higher Grade — and if you want a cheaper eighth of the same stuff, that's the place to go, as Higher Grade is a sister company to Veritas. Popping open a bottle of either is like slicing into a red-blotted rind of the real thing, with a uniquely intense citrus flavor to match.