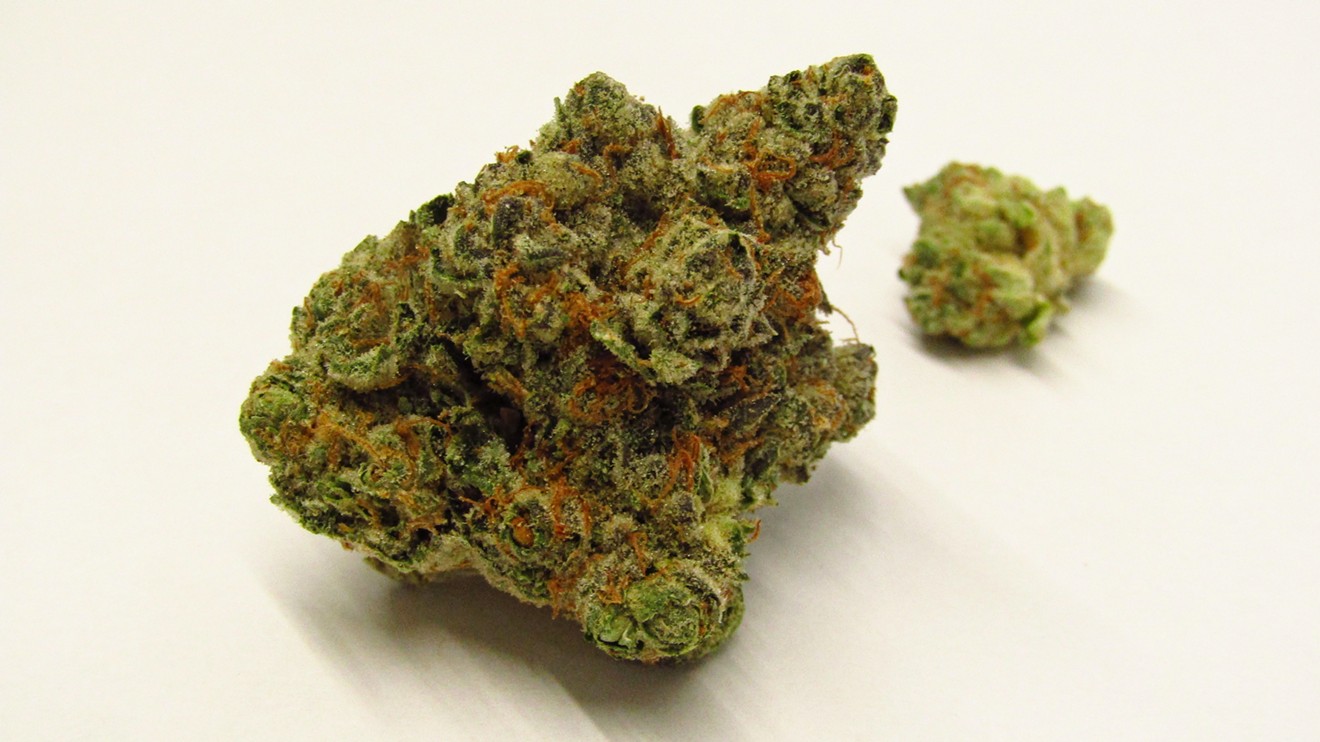 After smoking Wedding Crasher, you’ll want that meatloaf — and you'll want it now. Herbert Fuego
Flipping through TV the other night, tired of looking for something new, I saw two familiar faces pop up on the screen: Vince Vaughn and Owen Wilson. They were discussing motorboating tactics in Wedding Crashers, and I pressed the info button on my remote to see how far along the movie was — but then saw its year of release: 2005.

I knew Wedding Crashers was old, but not older than Twitter or sophomores in high school. Even sixteen years later and far past their career heights, though, I'd still pay money to see Vaughn and Wilson on screen together, even if it were a forced sequel. Until then, I'll settle for the cannabis strain named after the duo's peak performance.

Wedding Crasher (or Wedding Crashers, at some shops), is a mixture of Wedding Cake and Purple Punch, which are two very close equivalents to Vaughn and Wilson in the weed world. Both strains have been consistently popular for a couple of years now, and if someone told you they were in a new project together, you'd sign up sight unseen. And based on the box-office run that Wedding Crasher is having in Colorado dispensaries, that project has been a success.

Fruity, milky characteristics combined with old-school notes of Kush and Diesel give Wedding Crasher a balanced flavor that spans generations, and the physical high is a switch hitter. If I'm on my feet all day on a Saturday, Wedding Crasher wakes me up while massaging minor aches and pains. When I'm done with work and haven't eaten for six hours, Wedding Crasher doubles my appetite and puts me to bed before 10:30. Talk about a powerful duo!

Wedding Crasher is raking it in this summer. We've spotted the strain at A Cut Above, Cookies, Emerald Fields, Ganja Gourmet, Golden Meds, Green Dragon, Higher Grade, the Joint, Karmaceuticals, Lakeshore Cannabis, Lova, Magnolia Road, Mana Supply Company, Medicine Man, Native Roots, Oasis Cannabis, Pig ’N' Whistle, Silver Stem, Simply Pure, Solace Meds, Star Buds and Unity Road, but given the reach of Veritas and the extractors that work with it, expect to see Wedding Crasher at other stores around Denver and the rest of Colorado.

Looks: Just like its parents, Wedding Crasher grows big, dense buds in chunky, oblong shapes, with a heavy coating of trichomes. The strain looks strikingly similar to Wedding Cake, though slightly brighter, with a tendency to sport violet spots.

Smell: Wedding Crasher's aroma comes with a lot of your typical "doughy" and "frosting" monikers, and the strain does carry some sweet smells. However, I smell a more milky funk on the end of those fruity notes, almost like yogurt, with Kushy hints of vanilla and soil and a potent layer of gas blanketing it all.

Flavor: Users report grape and vanilla flavors from Wedding Crasher, and I've noticed those. The smoke starts off sweet, with flavors of grapes or berries, depending on the cut, with a dirty vanilla aftertaste accompanied by strong earthy and gassy overtones.

Effects: A strong physical high, Wedding Crasher's effects helped with a sore neck and back without killing my energy or mental alertness — for about an hour. After that, your energy level going into the toke comes into play, because the crash hits hard if you're working on little sleep...no pun intended.

Home grower’s take: “Beginners should avoid it until they're confident. It likes to fill out in the veg room, so you'll need to start topping early, and not everyone is confident with that. Colorado's not a terrible environment for it, though, because those thick-ass buds are a little susceptible to mold or mildew — another reason why you shouldn't grow Wedding Crasher unless you know what you're doing. The yields and that cupcake sort of flavor are very much worth it, though."