False Report's Alan Andrews Has Good Reasons to Be Happy 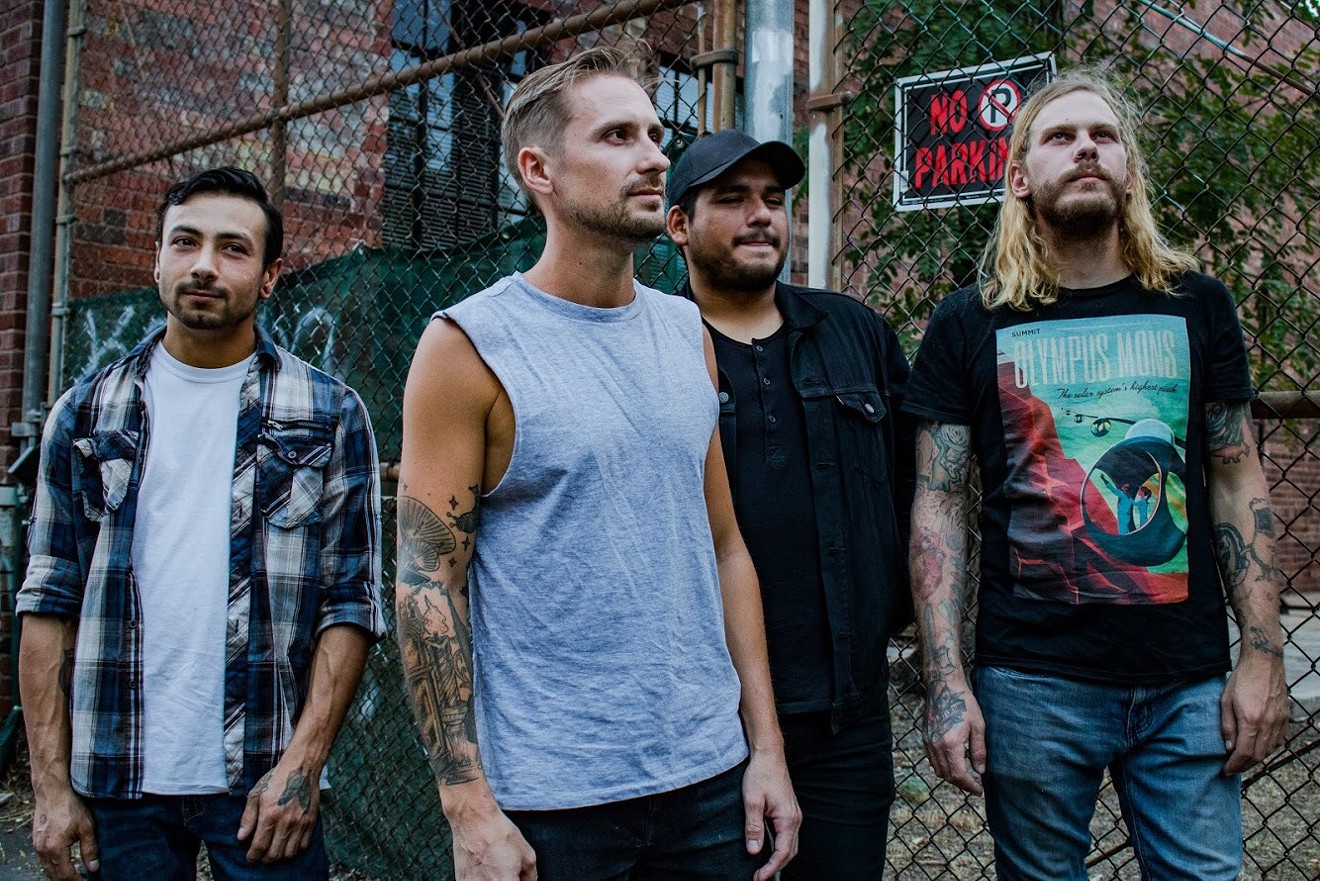 False Report is a rising force in the Denver pop-punk scene. Anthony Borders
For the first time in a long time, False Report frontman Alan Andrews is happy.

“I’m happier now than I’ve been in years. It’s fucking weird, man,” says Andrews during our recent interview. “I’ve found the best way to be happy for myself: I have to be working out all the time, I have to be doing yoga – but I also have to able to sing my emo songs. The combination of all those things has really allowed me to find a happy place in life.”

Andrews has good reason to be happy. Over the past three years, he has turned False Report into one of the best pop-punk bands in Colorado. The group has three EPs since 2016’s Same Mistakes under its belt, and each release has been better than the last.

At the end of 2018, the bandmates dropped the single “It Takes Time” and a subsequent video as a followup to their third EP, Your Addiction Sleeps Tonight. This capped off a year that saw them opening for Red Jumpsuit Apparatus at the Black Sheep and headlining the Marquis.

“We’ve been lucky enough to be on a lot of cool bills and get to open for some cool national bands. I like the spot we're in; we’re like the quintessential opening band,” says Andrews, looking back on the last year.


This rising popularity is nothing new to Andrews. A sort of a local hero in the Denver music scene, he was the bandleader and frontman of the local dance-punk band the Photo Atlas. With that group, he garnered national press, landed promo placements, and lived in a fluctuating state of on-and-off touring and recording. At one point, the band was picked up by Stolen Transmission, an imprint of Island Def Jam Records, and had an upward trajectory from there. "We put so much hard pavement-pounding work into that band; it’s crazy to look back. We really went all in.”

Then in 2007, right after the Photo Atlas released its first full-length album, No, Not Me, Never, like so many major-label imprints during that time, Stolen Transmission folded.

It was a tough blow for the musicians, but they got a lot out of being on Stolen Transmission, and they kept on, self-funding the 2009 EP To Silently Provoke the Ghost and a split EP in 2010 with fellow Denver band the Epilogues. In 2013 they released a second full-length album titled Stuck in a Honey Trap, followed by 2014’s The Ghost Bear EP. But by 2015, it was becoming clear that something had to change.

“I think we spent so much of our lives dedicated to the band, once Bill [Threlkeld III] and Mark [Hawkins] got a chance to step away from it, they’ve really been enjoying it,” says Andrews. "We spent ten years touring hard and releasing albums. No one stopped, so I think we all needed a breather. They both have their own businesses now; I think they needed time to do something that wasn’t music."

Admittedly, it was a dark time for Andrews. The final Photo Atlas release did not come together the way that anyone from the band had intended. The rest of the group was ready to be done with the project and move on with their lives, but Andrews was determined to finish the EP, titled Disregard, Disconnect, and pushed it out on his own. In doing so, he created tension with his bandmates that until recently has been hard to come back from.

“The thing I wish I would have done differently was be more sympathetic to lifelong friends’ feelings on it," he says. "I was stone cold in the moment.”

In the end, Disregard, Disconnect was only released on Soundcloud and Bandcamp, and everyone in the band moved on.

Coming out of that, Andrews did some soul-searching and decided to take time to focus on his physical and mental health. While doing so, he began to write solo guitar songs, shifting gears from his songwriting in the Photo Atlas, which he describes as “orchestral” in the way that he would write all the parts at once. “I always wanted a band where I could sit down and play it on acoustic guitar, and it would sound how the song is supposed to sound.”

While he was discovering a new approach to his songwriting, he found himself working in a pizza kitchen alongside future guitarist Chris Martinez, and through a mutual appreciation of emo and pop punk, they came up with the concept for a band. Bringing Joe Bruno and Coty Eikenberg into the picture, False Report took form, and just like that, Andrews was gigging regularly and recording his best music yet.

A little older and a little wiser, his history and experience in the music industry has made him into a cool uncle of the Denver music scene, which he looks at with pride. While he loves being the headliner and the support band for national acts, it was the house shows he attended in 2018 that were his favorite.

“I feel like the scene is really fucking cool right now. I feel like these shows we’re playing, the people who come are really fucking cool. It’s a younger, more open-minded crowd, where it’s not really about being super-cool or super-punk rock or something. It’s all these different types of kids who just want to come to a show and sing and have fun. It’s a really cool environment.”

Looking into 2019, Andrews is excited for the future of not only his band, but the state of the Denver music scene.

“There are so many young kids coming up who are so talented and writing great songs," he says. "I just look at it and say, this is undeniable. Eventually this has to catch on. Musically, the highlight of the year was watching the music scene grow. Just watching everyone have such a great time and watching what everyone is doing, I’m wondering what’s going to happen next. I’m stoked on it."

Moving forward, Andrews isn’t one to stop or slow down, so for the first few months of 2019, he plans to record another EP and is entering the new year with a healthy amount of self-reflection and honesty.

“I’ve never really made a decision I would change, because there’s always something to learn from every choice, but I’ve absolutely regretted the way I’ve treated others and myself. That’s why I do all this meditation and yoga and working out nowadays — to stay present and treat myself and others with more care and consideration.”

False Report opens for the Hellgramites, 7:30 p.m. Friday, January 11, Marquis Theater, 2009 Larimer Street, $10 to $12.
KEEP WESTWORD FREE... Since we started Westword, it has been defined as the free, independent voice of Denver, and we'd like to keep it that way. With local media under siege, it's more important than ever for us to rally support behind funding our local journalism. You can help by participating in our "I Support" program, allowing us to keep offering readers access to our incisive coverage of local news, food and culture with no paywalls.
Make a one-time donation today for as little as $1.