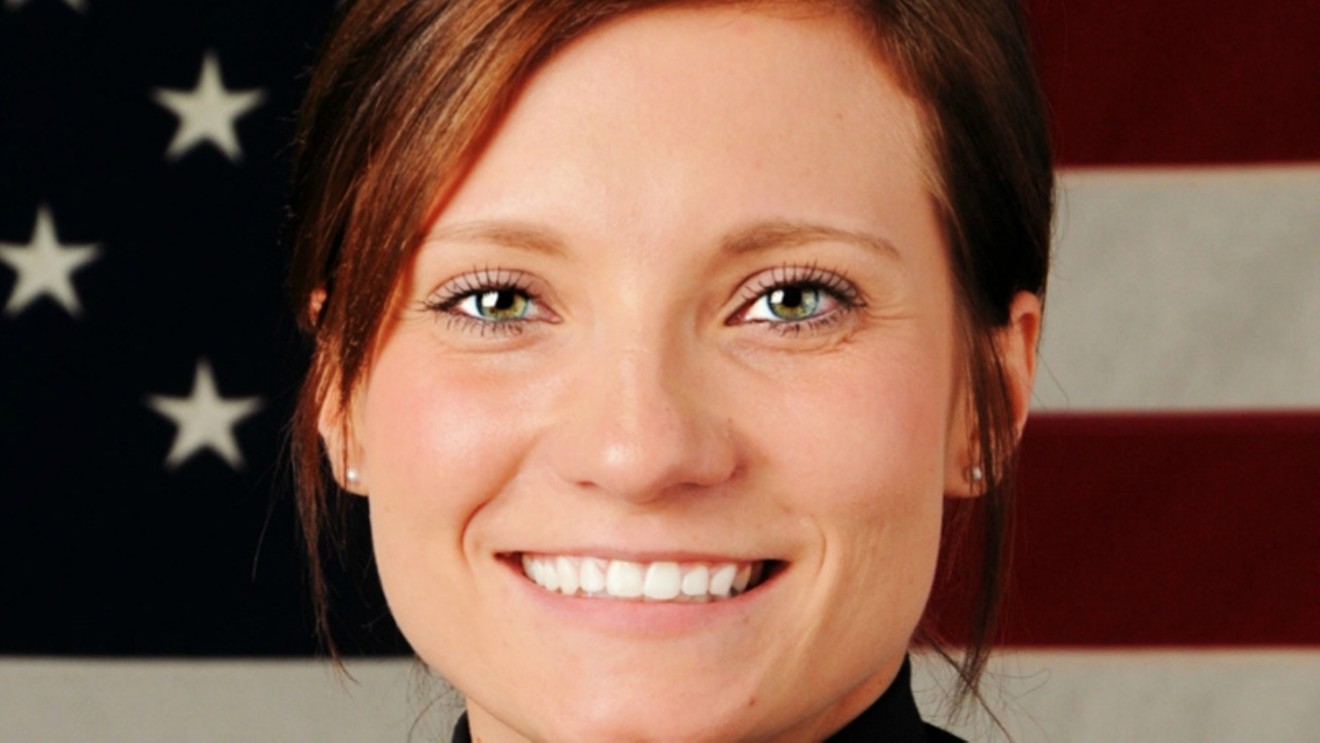 A photo of Officer Jessica Thomas released in January 2020, after she helped delivery the baby of a woman at a community shelter. Denver Police Department
Three Denver Police Department officers have received significant suspensions for their bungling of a single case involving a drunk man and their inability to find a bullet hole that would have proven he'd fired a gun, as his terrified girlfriend feared — even though it could be seen on video from not one, not two, but three body-worn cameras. Owing to what investigators dubbed a "pattern of mistakes," the Denver District Attorney's Office declined to prosecute the suspect, citing "no likelihood of conviction."

Officers Jessica Thomas and Jonathan Hayes received ten-day suspensions, while Corporal Brendan Simmons, their supervisor, earned a fourteen-day suspension. The Denver Department of Public Safety didn't release photos of the three in conjunction with the disciplinary letters outlining the actions taken against them. But back in January 2020, the DPD shared a photo of Thomas for a more positive story: Along with another officer, Haley Peyton, she safely delivered the baby of a woman at a community shelter.

The narrative for all three letters begins during the early-morning hours of February 21, 2021, when Hayes responded to a domestic-violence call at a residence on the 2700 block of Walnut Street; Simmons and Thomas arrived shortly thereafter. The victim, identified by the initials MA, told Hayes that her boyfriend, referred to as AB, had fired a gun inside their apartment — a claim that was reinforced by the computer-aided dispatch entry, which read:

BOTH PHYSICAL AND VERBAL

SUSP TEXTED RP AND SAID HE WAS GOING TO KILL HIMSELF

HAS TWO GUNS AND THEY ARE STILL LOADED

During her initial interview with Hayes, conducted outside the apartment building over half an hour after her original 911 call, MA said, "I went to take my makeup off in his bathroom, and he...was in the living room at that point, and from what I remember a gun was fired. It scared me. So, at that point, I tried talking to him, and he at that point tried blaming me and said that it was me who fired the gun." She didn't think he'd been aiming at her but was concerned about his safety, especially since he'd texted her the words "kill me" following her departure.

Under further quizzing by Hayes, though, MA became less definitive about what happened, saying she "was not sure it was a gunshot, but it was for sure a loud noise."

By the time the officers got into the apartment building, with the help of the Denver Fire Department, more than an hour and twenty minutes had passed since MA phoned the cops — and because they initially went to the wrong apartment, their first contact with AB was further delayed. When they finally connected with AB, Hayes is said to have discovered "a box of ammunition in [his] pocket," as well as "a variety of bullets" that had been "scattered around the apartment." However, AB denied having fired a gun.

Meanwhile, Simmons executed what's termed "a protective sweep of the apartment." In his body-worn camera video, he's "seen entering the bedroom, looking in the closet, and entering the bathroom. A small hole is visible in the shower tile closest to the toilet." The video also shows Hayes inspecting various parts of the apartment, and when he is in the bathroom, "a bullet hole is visible in the shower tile" — and the hole could be seen in a sequence captured by Thomas's body-worn camera, too.

The officers did manage to find a rifle, a handgun and several loaded magazines. Nonetheless, Hayes eventually determined that AB "was neither suicidal nor homicidal," but was "extremely intoxicated." Despite having determined that "the two parties were involved in a verbal-only domestic disturbance," the officers decided that AB should be "taken to detox for his own safety."

The next day, MA returned to the apartment in the company of two officers on "civil standby" to retrieve her belongings. Upon entering the bathroom to retrieve her razor, she "saw a hole in the tile, with powder fragments in [the] tub." She informed Hayes about the discovery by calling the number on a business card he'd given her and followed up with an email in which she wrote, "I think this is where [AB] shot at. My concern is that I was in the bathroom at the time, and I believe he was attempting to aim at me."

The response to this development was hardly immediate. A search warrant for the apartment wasn't drafted until March 2, and while the bullet hole was visible to officers on the scene, the DA's office dropped the matter because "the suspect had an opportunity to manipulate the hole in the bathroom tile" during the intervening days," and his trip to detox "would give rise to reasonable doubt in a juror's mind."

In a subsequent interview, Hayes offered a variety of explanations for how he'd handled things. "The apartment was...kind of a mess," he said, and when he looked around, he "didn't see any obvious damage, didn't see any bullet holes. ... I guess one key part is that she wouldn't say for sure that a firearm had been fired. I've been in rooms when firearms are fired. I've done training in close quarters where a firearm has been fired. Firearms are very loud. So when a firearm is fired, like, you know that a gun has been shot. So that's huge right away that she wouldn't say for sure that he shot a gun or that a gun was fired by him. Like, guns are loud."

Click to read the discipline letters for Officer Jonathan Hayes, Officer Jessica Thomas and Corporal Brendan Simmons.
KEEP WESTWORD FREE... Since we started Westword, it has been defined as the free, independent voice of Denver, and we'd like to keep it that way. With local media under siege, it's more important than ever for us to rally support behind funding our local journalism. You can help by participating in our "I Support" program, allowing us to keep offering readers access to our incisive coverage of local news, food and culture with no paywalls.
Make a one-time donation today for as little as $1.