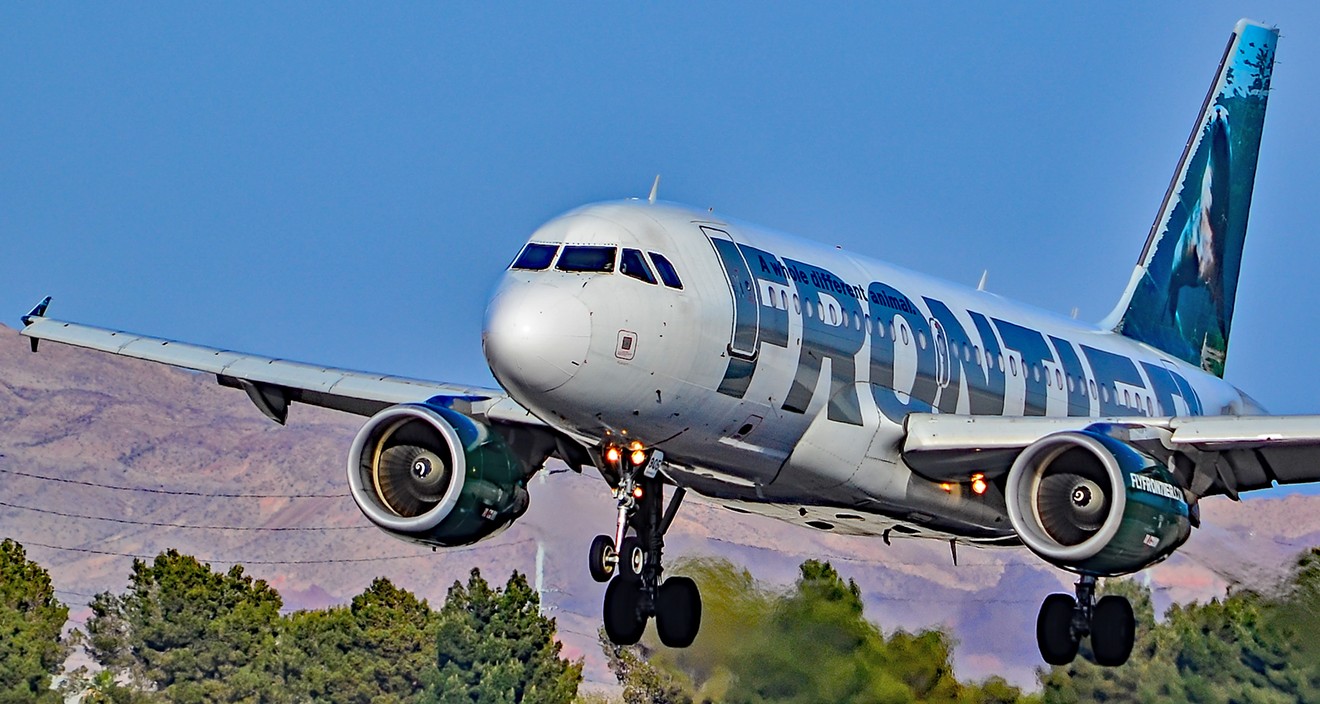 Frontier takes off for its 25th year of service. Tomas Del Coro at Flickr
Frontier Airlines likes to bill itself as “Denver’s hometown airline,” and for all the hitches in its giddy-up over the years, it really is, from the original company that ran from 1950 through its dissolution in 1986, to the present-day company that took the old name and started up in 1994. The original Frontier began with four flights out of the old Stapleton Airport, filling a service gap left by Continental Airlines. It’s grown over the years to become the eighth-largest airline in the country — with some fits and starts along the way.

Westword wanted to help mark Frontier’s 25th anniversary — which the airline celebrated on July 5 — by looking back over the years of our coverage of its successes and its challenges, its good days and not-so-great ones. Happy birthday, Frontier, you old so-and-so. 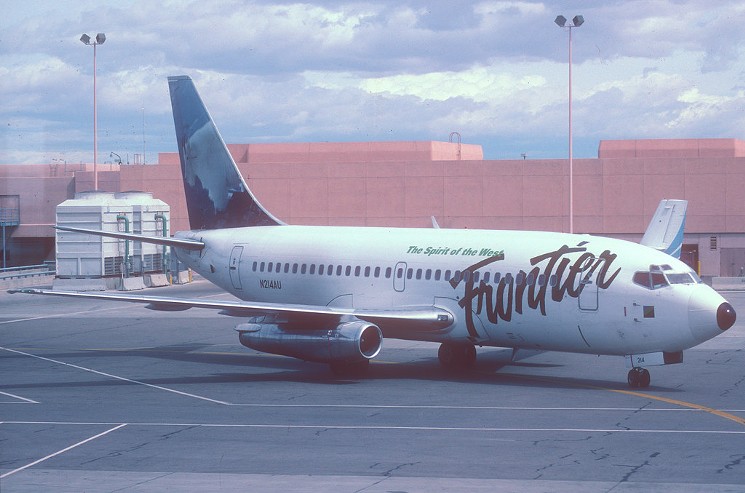 1999: Frontier goes coast-to-coast
Within five years of starting operations, Frontier expanded service to include flights covering both coasts and many stops in flyover country, too — all of them hubbed right here in Denver — which caused a lot of people around the nation to be able to say “I’ve been to Colorado…at least, I landed at the airport on my way to Vegas.”

2001: Frontier flies high
Right after the hubbub of Y2K turned out to be nothing more than a tale told by many idiots, Frontier was experiencing much success. Forbes magazine named it one of its fastest-growing companies back in 2001. By 2014-’15, however, it would top Forbes’s list of worst airlines.

2003: The animals arrive
Frontier’s early successes allowed it to invest in one of Colorado’s classic ad campaigns — and it hit big nationwide, too. The animals on the ads matched up with the animals portrayed on the tails of the planes themselves, and passengers loved them both. The commercials were clever, and adults and kids alike enjoyed talking about which animal was on the tail of their plane. It was perhaps the best era of Frontier, and it would last for a few animal-filled years.

2008: Bankruptcy and acquisition
Only a year after the U.S. Department of Transportation named Frontier a “major carrier,” the company found itself in serious financial trouble because of a disagreement with its credit card processor. It entered into Chapter 11 bankruptcy protection in order to reorganize and protect itself from “severe restraints on Frontier’s liquidity.” It must have worked: By that November, the company reported its first profitability in months. And that in turn made the company ripe for acquisition by Republic Airlines in 2009.

2009: The animals are endangered
Republic’s acquisition had serious ramifications: Not only did much of the organization move to Indiana, but much of the company identity was suddenly called into question, including the massively successful “whole other animal” commercials. To be fair, even successful ad campaigns eventually end. (Just ask Mr. Whipple, who no longer squeezes the Charmin, or the chihuahua that can’t legally vocalize his “quiero” for Taco Bell, or the Budweiser frogs who now share an efficiency apartment in Miami and make their living croaking for small change on the boardwalk.) Jack, Griz, Charlie, Flip and friends were almost forcibly retired when Republic acquired the company, and there was even some talk that the Frontier name itself might disappear. In the end, outcry from employees and fans both local and national saved the anthropomorphic beasts…and the Frontier name was retained, too.

2010: Undercover boss
In a move that was presumably designed to recapture some positive press after a few years of not-so-great publicity, then-CEO Bryan Bedford was on one of the season two episodes of the reality TV show Undercover Boss, in which he learned humility by being trained by some of his lowest-paid employees...and also the lesson that the free chocolate-chip cookies Frontier offered on every flight were significant and important and part of who it was — and wanted to be — as a carrier.

2012: Goodbye, cookies
Frontier cut the cookies just over a year later, which means that the lesson CEO Bedford took from Undercover Boss was more along the lines of “Holy shit, it sort of sucks not being the CEO.” It wasn’t a popular move, but it was only the beginning of some serious belt-tightening.

2014: Ultra low-cost…plus fees
The huge change in Frontier’s business model came in 2014, when it stopped trying to directly compete with Southwest Airlines and instead chose to go head-to-head with no-frills carriers like Spirit and Allegiant. The move cut flight prices by an average of 12 percent, and Frontier started charging for things that had previously been included in the cost of a ticket, like seat selection, non-alcoholic beverage service and carry-on bags. The move frustrated longtime customers of the airline, who’d been used to a different level of service. Prices might have been lower for some, but Frontier was still ripe for ridicule.

2019: Frontier is still flying
Despite customer complaints, weather woes, a spectacular flame-out of their director of communications, strike threats and various other notable failures for Frontier, it’s still flying when many other airlines have given up the ghost. Whether or not Frontier’s low-cost business model will be able to bring the company back to its former heights has yet to be seen. If Frontier is smart — which remains to be seen — its birthday celebration will include cookies for everyone.
KEEP WESTWORD FREE... Since we started Westword, it has been defined as the free, independent voice of Denver, and we'd like to keep it that way. With local media under siege, it's more important than ever for us to rally support behind funding our local journalism. You can help by participating in our "I Support" program, allowing us to keep offering readers access to our incisive coverage of local news, food and culture with no paywalls.
Make a one-time donation today for as little as $1.