The Castle Rock location opens April 15. Shake Shack
The Front Range is home to a lot of tasty burgers (including our picks for the ten best), but big out-of-state chains continue to draw big lines of hungry fans when they debut. Shake Shack will soon open its newest Colorado outpost — its largest in the state yet. The location at 6489 Promenade Parkway in Castle Rock will start serving Shake Shack's signature ShackBurgers, crinkle fries, shakes and more on April 15 at 11 a.m.

This location has another notable feature: It's the first in Colorado with a drive-thru — and only the fifth Shake Shack in the country with that level of ordering convenience.

“We’ve had our eye on expanding to the family-focused, fast-growing community of Castle Rock for a long time,” says chief development officer Andrew McCaughan in an announcement. “Not only are we looking forward to serving the greater Denver area, we’re proud to open one of our first drive-thrus for busy families and on-the-go fans who want to get their Shake Shack fix.” 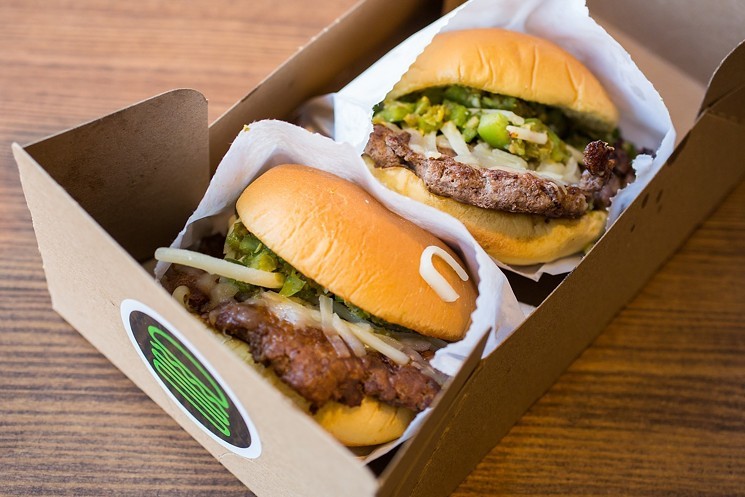 Shake Shack continues to expand in Colorado.
Danielle Lirette
Since opening its first Colorado location in RiNo in 2018, Shake Shack has expanded quickly; the Castle Rock location is the eighth in the state, and the most southernmost outpost here so far.

The Castle View High School marching band will be on hand for the grand opening, and the first 100 guests will nab Colorado Shake Shack beanies or tumblers. A buck from every sandwich sold on April 15 will be donated to Dads of Castle Rock, which partners with local businesses and hosts fundraising events for families needing financial assistance.

The location's regular hours will be 11 a.m. to 10 p.m. daily, and Shake Shack promises that it's split kitchen design — with a separate area for preparing drive-thru orders — will help mitigate long lines. Here's hoping the traffic jams on April 15 are minimal.
KEEP WESTWORD FREE... Since we started Westword, it has been defined as the free, independent voice of Denver, and we'd like to keep it that way. With local media under siege, it's more important than ever for us to rally support behind funding our local journalism. You can help by participating in our "I Support" program, allowing us to keep offering readers access to our incisive coverage of local news, food and culture with no paywalls.
Make a one-time donation today for as little as $1.