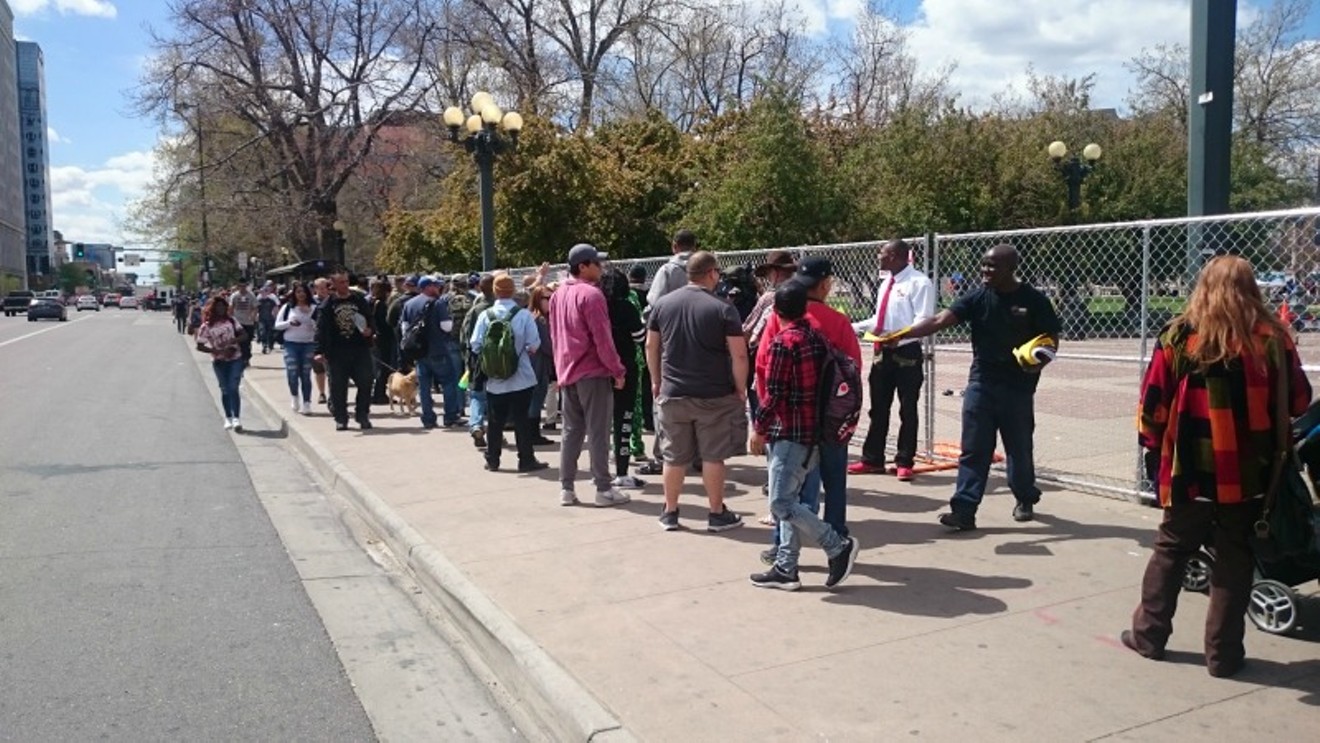 The line to enter Civic Center Park for the Denver 420 Rally was long even before the rains came. Photo by Michael Roberts
Update: The Denver Police Department has just released arrest and citation numbers for the Denver 4/20 Rally that are higher than those originally reported, and has also provided us with an update about gunfire that rang out near Civic Center Park. Get the details in our post headlined "Denver 4/20 Rally Bust Total: 32 Marijuana Citations, Sixteen Other Arrests, Tickets." Continue for our previous coverage.

Original post: For the second consecutive year, the vibe of the Denver 420 Rally at Civic Center Park was harshed by Mother Nature.

The weather for the bash held yesterday, April 20, was far better than it was in 2016, when a snowstorm forced a postponement until May 21. But an afternoon rain that ranged from drizzly to steady increased the misery of those who had to stand in line for an hour or more in some cases in order to gain entry to the festival grounds, which were protected by a fence that attendees eventually broke down in the minutes before the annual 4:20 p.m. countdown.

And that's not to mention arrests, citations and a shooting that took place not far from the park in the hours after the main event.

In our Denver 420 Rally preview, main organizer Miguel Lopez stressed that security would only be looking for weapons, in an effort to prevent anything like what happened during the 2013 rally, when two people were shot in the leg and a third was grazed by a bullet; the shooting caused a panic in which Lopez himself was injured.

We've been unable to reach Lopez for a post-festival interview. If and when he gets back to us, we'll update this post. But because there was only one main entrance and a very limited security staff doing the wanding, lines began stretching out before noon and only lengthened throughout the afternoon. 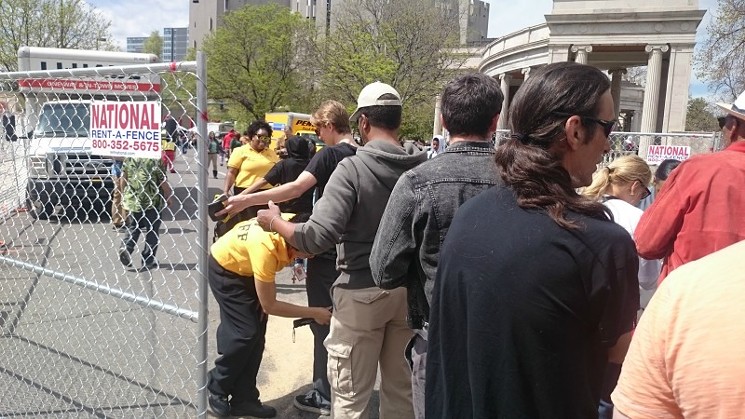 The main entrance to the festival, where just two security guards had to process a crowd in the tens of thousands.
Photo by Michael Roberts
Facebook responses to our post-event article "Five Reasons the 420 Rally Sucked...and Some Suggestions for Next Year" found plenty of folks expressing frustration about how things went down.

"It was trash!" one person exclaimed. "Way to fuck it all up real nice with one entrance, and a sea of pigs to get in! If they can't do it right, don't do it at all!"

"I agree it sucked," added another. "It took me over an hour to find a parking space blocks away, then the line was so long that after waiting 45 minutes and only having moved up a quarter of the way I left. No thanks!"

Another person responding on Instagram wrote, "Seriously Denver?? EVERY year the lines to get into the 4/20 rally are HOURS long! Roads are closed and parking is unavailable!! With the MILLIONS of $$ that cannabis brings into this State, I would think you would be a little more accommodating to us!!"

As 4:20 p.m. drew ever closer, plenty of folks got sick of being on the outside looking in. They eventually broke through the fencing along Broadway. Here's a video showing throngs rushing onto the grounds.


Obviously, none of the individuals seen in this clip were checked for weapons. But we've heard no stories about gunplay at the park during the fest.

In the meantime, law enforcers were present in large numbers.

Early on the morning of the festival, the Denver Police Department tweeted a mixed message, with a dancing-cops GIF accompanied by text that advised attendees to "#Consume Responsibly or we'll bust u guys."

Then, around 1:30 p.m., the DPD checked in on Twitter again with this: "Just heard 2 Chainz is performing! That's awesome — groove to 2 Chainz, don't shuffle in 2 cuffs."

In the end, there were reportedly five arrests and twenty citations at the park. But more worrisome was what happened outside it. 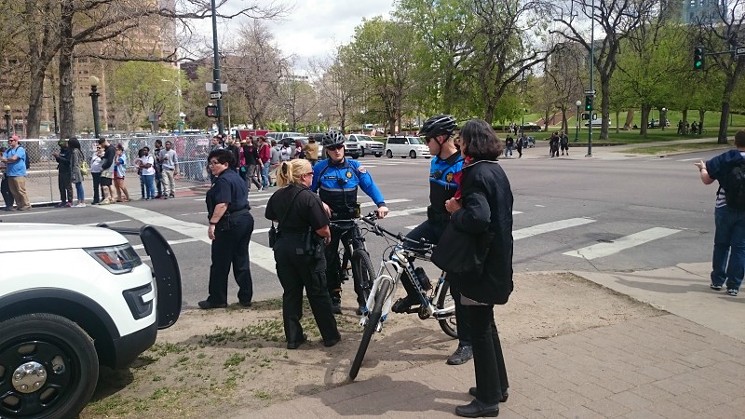 Police were present in force both inside and outside the fenced area.
Photo by Michael Roberts
At around 6 p.m., a shot was fired near the intersection of 15th and Cleveland Place, just north of Civic Center Park.

Thus far, the DPD hasn't said whether the incident was directly tied to festival attendees. Fortunately, no one was hurt.

As for the flaws in this year's festival, there's one piece of good news. The next 4/20 is only 364 days away. 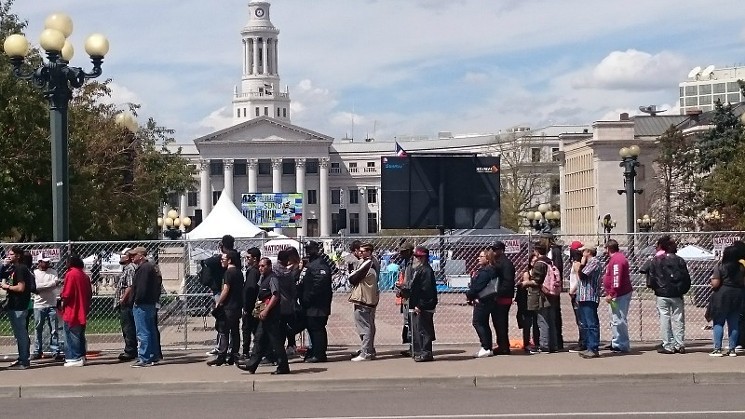 A view of the line from across Broadway.
Photo by Michael Roberts
KEEP WESTWORD FREE... Since we started Westword, it has been defined as the free, independent voice of Denver, and we'd like to keep it that way. With local media under siege, it's more important than ever for us to rally support behind funding our local journalism. You can help by participating in our "I Support" program, allowing us to keep offering readers access to our incisive coverage of local news, food and culture with no paywalls.
Make a one-time donation today for as little as $1.