Laura Shunk
The bulgogi and octopus stew (left) and stir-fried rice cakes are both good orders at Shin Myung Gwan.
Seoul, South Korea, is one of the best eating cities in the world: Women hawk spicy rice cakes from teeming market stalls, tiny parlors put out tasty fried dumplings at breath-taking speed, and restaurants are often laser-focused on serving a perfect version of just one or two dishes, be that table-cooked trotters or brothy bowls of cold buckwheat noodles. You can order fried chicken and a round of cold beer delivered to your geographical location (even if it's, say, outdoors along the Han River), and small shops everywhere lure you in for pastries or shaved ice sweetened with red beans and condensed milk. The food is rich and strongly flavored — good for steeling against the country's cold winters — and almost all of it is worthy of attention and obsession. Luckily, metro Denver boasts a sizable selection of solid Korean restaurants that turn out good barbecue, plus noodles, stews, seafood and market treats like tteokbokki (those cylindrical rice cakes). Here's our list of the ten best Korean restaurants in the metro area — most of them in Aurora — listed in alphabetical order. 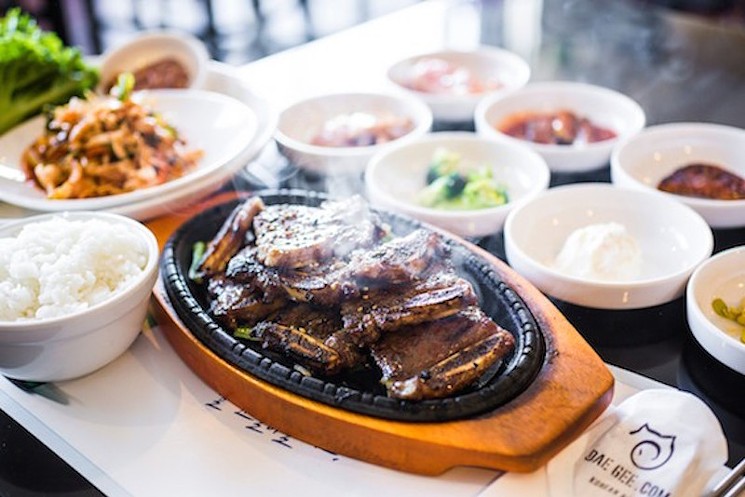 Short ribs and sides at Dae Gee.
Danielle Lirette
Dae Gee
460 South Broadway, 720-542-3164
827 Colorado Boulevard, 720-639-9986
7570 Sheridan Boulevard, Westminster, 720-540-0700
Dae Gee started as a Westminster shop touting all-you-can eat Korean barbecue, and its following was so strong, owner Joseph Kim has since expanded out into multiple Mile High locations. Dae Gee's draw goes beyond the carnivorous feast: modern interiors draw diverse crowds, kids' pricing is especially family-friendly, vegetarian items are plentiful and spelled out, and clear instructions plus grilling assistance from staffers are a boon for diners who are unsure how to approach cooking their own bulgogi. The menu here stays firmly within the types of Korean items with which Americans are most familiar — barbecue, bibimbap, tofu stew — but it does those dishes well. Start your meal with a veggie pancake, and then head straight for the ’cue, which also provides you unlimited rice and banchan (here just called sides). Our favorite is the galbi short ribs.

Funny Plus
2779 South Parker Road, Aurora
303-745-3477
Look around Funny Plus, the haphazardly arranged strip-mall restaurant whose facade bears the name "Hof," and you'll notice just about everyone has ordered the Korean fried chicken. You should do the same, opting for either the original crisp-cased collection of wings and drums, or the type bathed in sticky sweet-hot sauce (and if you can't decide, there's a half-and-half option). You could, quite frankly, just eat that, paired with several bottles of beer and maybe a little kimchi. But better to side it with some cheesy corn — a common barbecue offering in Korea, but rarer here on the Front Range — and, if you've got a large group, deokbokgi, or rice cakes in spicy gochuchang. If you feel you must cook, request a barbecue table; Funny Plus does decent brisket and galbi alongside tripe and jowls. 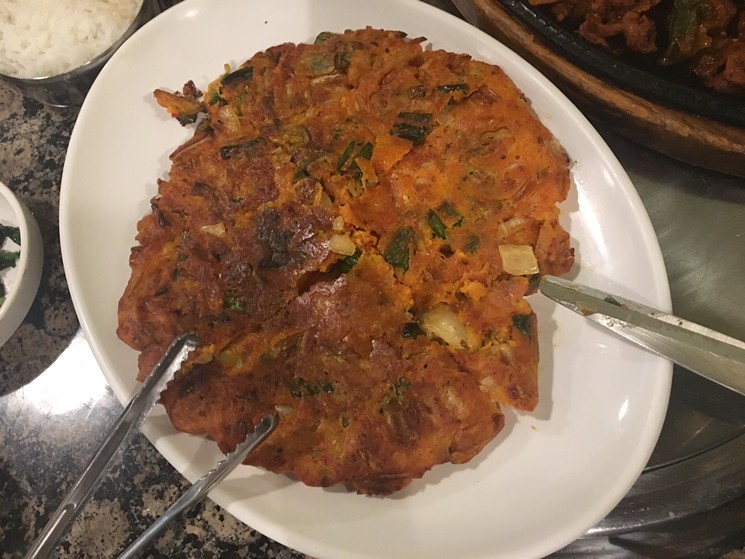 Kimchi pancake at Mr. Kim.
Laura Shunk
Mr. Kim Korean BBQ
12201 East Mississippi Avenue no. 113, Aurora
303-367-4444
The cavernous dining room that's home to Mr. Kim Korean BBQ is cluttered with hoods and tabletop grills, belying the sizable barbecue menu that awaits. The most economical way to eat here is to head straight for the all-you-can eat section, a three-tiered dinner pricing scheme that nets you as much as you can grill over the course of two hours (plus unlimited banchan and a scallion pancake). The least expensive version of this feast buys you three variations on bulgogi plus pork belly and thin strips of beef; spring for the top-tier combo and you'll get access to all of that plus tongue, pork skin, white fish and cheek. If you go the à la carte route, note that you'll need to order at least a couple of platters of meat to do your own grilling — one round of pork bulgogi or the like, and the kitchen will cook it for you so you don't dirty your grill. And not that you'll be hungry after this indulgent spread, but for dessert, you could always pop over to the Pacific Ocean Marketplace, a massive Asian grocery store that houses a small Korean bake shop at the front. Ox head soup at Olleh.
Laura Shunk
Olleh Korean Restaurant
2648 South Parker Road, Aurora
303-368-8800
Don't be put off by the look of this place: Olleh sits in a dilapidated Parker Road strip mall, and its interior has the ambience of a neglected suburban office breakroom. Like many restaurants in Korea, this place focuses on just a few specialties: noodles, kim-bap (basically, Korean sushi rolls), ddukbokki (rice cakes in sweet-spicy gochuchang) and ox head soup. Glance at other diners, and you'll see that everyone (other than kids) is eating the soup, milky and deeply satiating from the long-stewed bones and floating with strips of beef. Your server will bring it with a heaping bowl of green onion, plus chopped chiles and pepper paste. The more green onions the better, we say — the pungent edge adds depth to the savory broth. The kids, by the way, tuck into the ddukbokki; rice cakes mixed with thin triangles of fish cake to create a stew best described as Korean comfort food. And don't be afraid to ask for more kimchi; the version here is the best we sampled. 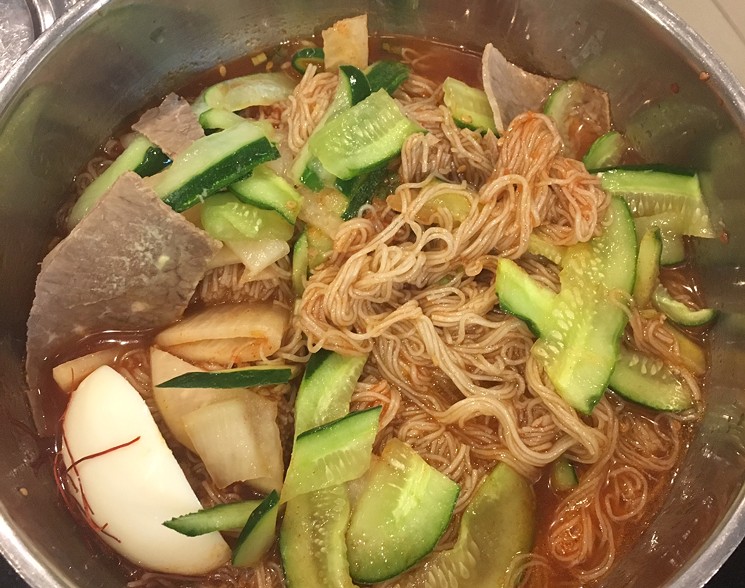 Bibim naengmyeon at Seoul BBQ.
Laura Shunk
Seoul BBQ
2080 South Havana Street, Aurora
303-632-7576
Seoul BBQ is a well-known Havana Street labyrinth of private rooms and a winding dining room, all filled with grill-inlaid tables beneath boxy exhaust hoods. This restaurant has its ’cue down to a science, and it churns out standards like bulgogi beef and galbi short ribs alongside more specialized cuts like pork jowl, beef tongue and pork collar with octopus. Check out the combinations if you'd like to sample a variety; they include soju and beer in their price tags. Good as the meat is, you shouldn't overlook the rest of the menu, which spans a number of Korean specialties, from stews to snails to bibimbap. We like the bibim naengmyeon, in which cold noodles are pooled with savory, chile-imbued broth. The version here uses sweet-potato noodles (simultaneously stickier and more slippery than the more common buckwheat), is nicely balanced by a hit of tartness, and is generously topped with slices of cucumber, pear and beef — plus half a hard-boiled egg. As a bonus, Seoul recently added a catering shop next door, from which you can carry out Korean pastries and vats of the excellent banchan you were served as sides.

Keep reading for more of the best Korean restaurants in town...