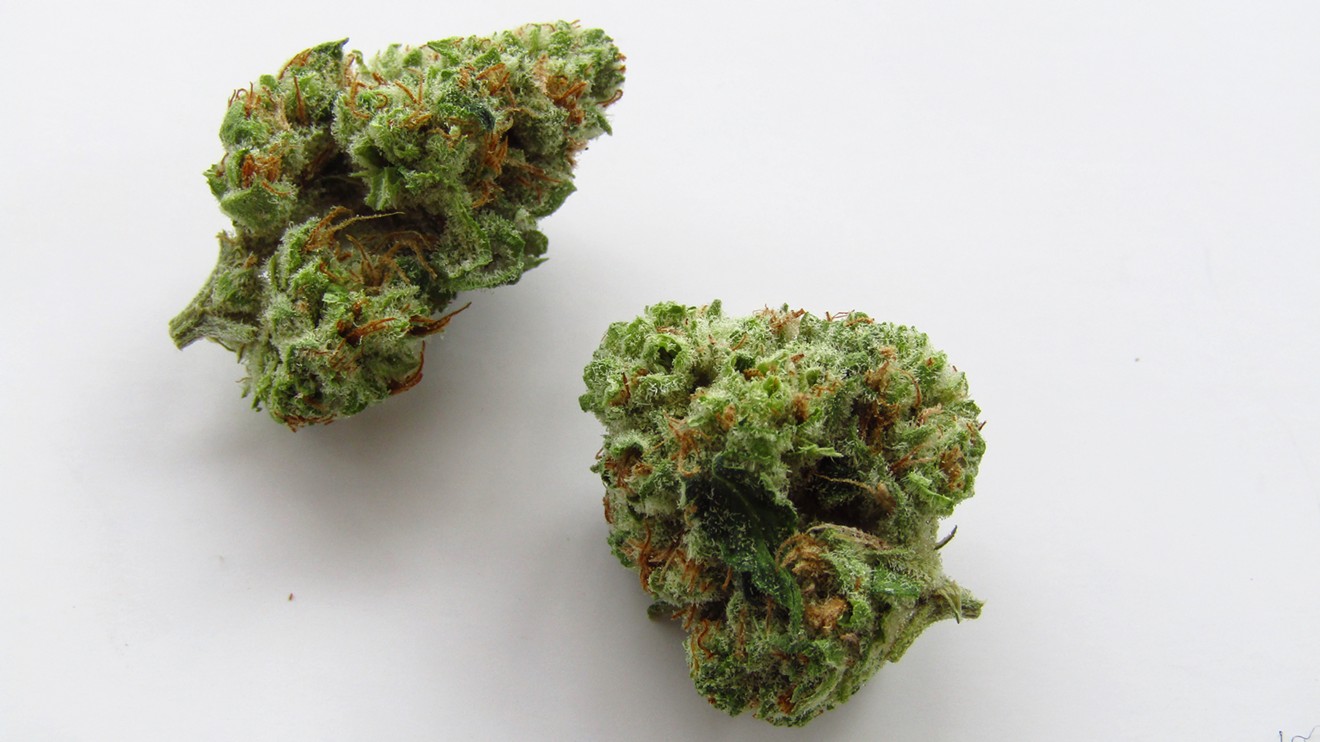 Bop Gun, funk you up. Bop Gun funk you up. Herbert Fuego
No one escapes the holiday season without eating more junk food than they should. For most people, that winter weight comes from sweets, but cheese is my indulgence. Having a family from the Midwest tends to make every holiday cheesy, but COVID-19 has kept my loving family — and their illustrious collections of sharp, funky and spreadable cheeses — separated during the holidays. Too cheap and lazy to create my own Wisconsin cheese board, I lucked into ordering the Denver version instead, one of the cheesiest eighths of weed I've inhaled in a very long time: Bop Gun.

A young strain from the Pacific Northwest, Bop Gun is a potent hybrid of Do-Si-Dos and Papaya, both of which have become hugely popular among Denver tokers and cannabis extractors. Having famous parents doesn't always equate to greatness, but after being blasted in the face with a terp cannon of stinky cheese, tropical fruit, yeast and peppercorns, I quickly respected Bop Gun's aromatic chops, and expected something similar in the smoke. Had I known anything about music, though, Bop Gun's funky characteristics wouldn't have been such a surprise.

Bop Gun was likely named after one of two songs: "Bop Gun" by George Clinton and Parliament, or a song of the same name by Ice Cube that pays homage to Clinton's term. A "bop gun" is essentially a shot of funk into the hearts of funkless people, so their hearts have at least some funk. Although not quite a Christmas miracle, such a come-up at the dispensary was extremely well timed as I yearned for a dry hunk of sharp ched. If it got me stoned enough to watch all three The Santa Clauses (and actually enjoy the third), I'd found a winner.

Unfortunately for my Disney Plus aspirations, Bop Gun's high was much more tame and malleable, and even sparked curiosity and creativity without killing focus. It might not have been what I was looking for during a boring night spent on the couch, but my leftover Bop Gun made for a handful of glorious morning and daytime highs, loosening up a stiff neck and shoulders without making me content to sit for too long. Perfect for the "productive stoner" — and fitting for a strain that reminds me of sharing cheese and wine with friends on a Thursday afternoon.

We've seen Bop Gun at Den-Rec and Native Roots so far, but once more people get a whiff of that funk, the list is likely to grow. Until then, Den-Rec's cut is worth the trip downtown or into the Overland neighborhood, because it's one of the cheesiest little devils I've broken apart in a while. Just save the Ritz crackers until after you smoke.

Looks: Versions of Bop Gun from Oregon look dense, dark and have regular purple spots, but Colorado's cultivators seem to produce longer, more airy buds that are much lighter in color.

Smell: You get a little of everything upon sniffing Bop Gun, with hints of spice, sweet dough and bergamot tea, but all of them are engulfed by sweaty, funky notes of blue cheese. All this strain is missing is a fruity aspect, and you've got nearly the whole plate.

Flavor: Although zestier than the smell implies, Bop Gun's cheesy puffs are appetizers in themselves, with a creamy, funky flavor wrapping around my tongue. Notes of lemons and sugar cookies try their darnedest to penetrate that cheesy cloak, but they barely succeed before an earthy, skunky aftertaste takes over.

Effects: Bop Gun's high was easy to function on, but noticeable in both my mind and body, warming up my limbs and joints while wrapping my brain in a blanket of bliss. Although probably not best for chronic body pain, such effective stress relief is hard to find, and welcome during the day.