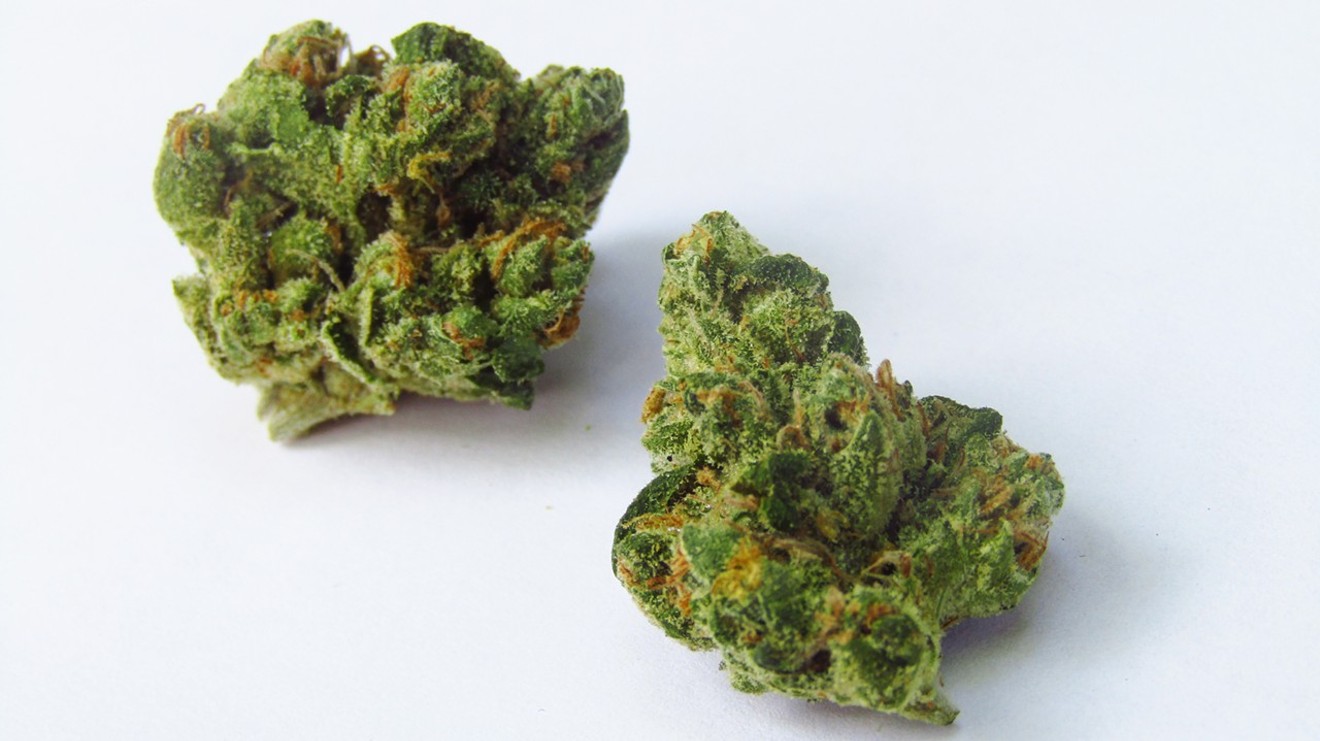 Ferrari Cake's high accelerates quickly but lacks direction. Herbert Fuego
If Netflix can make British bakers captivating, then race-car drivers with model-like good looks are a cinch. Count me one of the millions of Americans who are now addicted to Formula 1 after Netflix made a show about it. There's shady money involved, and the majority of countries hosting races have a history of civil-rights violations, but doesn't that describe all professional sports? Car go fast. I like. Go away, conscience.

Ferrari is the oldest and most popular car manufacturer participating in Formula 1, but the team has been cast as all speed, little strategy for a while now. The blood-red car started strong this year, though, with a 1-2 finish at the Bahrain Grand Prix. In 2022, Ferrari fans might just have their cake and eat it, too, which is exactly what I was hoping for after a surprise find at the dispensary.

Ferrari Cake, a mix of Lemon G and a cross of Girl Scout Cookies and Star Dawg, has been around much longer than my newfound love for fast cars. The rare hybrid is at least six or seven years old, but it's reappeared in Colorado dispensaries recently thanks to one popular grower. Excited at the thought of an active high as the weather gets warmer, I quickly purchased an eighth of the only Ferrari I'll ever be able to afford.

If I hadn't known Ferrari Cake's lineage, I'd have expected something gassy, given the vroom-vroom name and the presence of Star Dawg as fuel. The strain is all citrus and funk, though, with almost no chemical characteristics. Still, Ferrari Cake is louder than a revved engine, and apt to seep into apartment and hotel hallways almost immediately after the jar opens. The high might make your brain redline, too, so be careful before getting behind the wheel. I consider my tolerance very strong, and it only takes one bong rip of Ferrari Cake to keep me going in circles.

Looks: Ferrari Cake's buds are usually denser than they appear, but the gnarled, segmented calyxes can give them an odd, alien-like look. Sugar leaves like to embed themselves deeper than in most strains, giving the forest-green nugs an even darker appeal.

Smell: Sweet, sour and musty, Ferrari Cake's aromas combine to smell like a spoiled upside-down cake with hints of oranges or lemons, depending on the cut. Those juicy citrus aromas like to hang around at the end, but with a dry, yeasty finish.

Flavor: Ferrari Cake's intense smell translates well through the smoke, with a strong orange-lemon taste up front. Briny, earthy flavors show up soon after, giving the strain a surprisingly salty finish underneath such dominant citrus characteristics — almost like a lemon and kush kombucha. Easily the best of the strain's sensory aspects.

Effects: Smoking Ferrari Cake turns me into a drunk child with keys to a sports car, and I quickly end up going a million miles an hour with zero direction after the first hit. Most brain-blending daytime strains are useful for mindless exercise, but choosing between left and right is a mountainous decision on Ferrari Cake. Despite the aloofness, anxiety is more subdued than heightened, and there's a minor psychedelic vibe to the high. I'll be saving Ferrari Cake for my next pool or lake day, and won't miss it until then.

Where to find it: We've sniffed out Ferrari Cake at A Cut Above, Cannabis Station, Golden Meds, Green Depot, the Joint, the Lodge, LoDo Wellness Center and Rocky Mountain High, but it's likely that more stores carry the strain. Rocky Mountain High grows an in-house cut for its six Colorado locations, including Cannabis Station, and popular wholesale grower Cherry grows Ferrari Cake and squeezes it into rosin, as well. Cherry's take smells like something between a milkshake IPA and fermented lemons, with an odd but welcome savory back end.