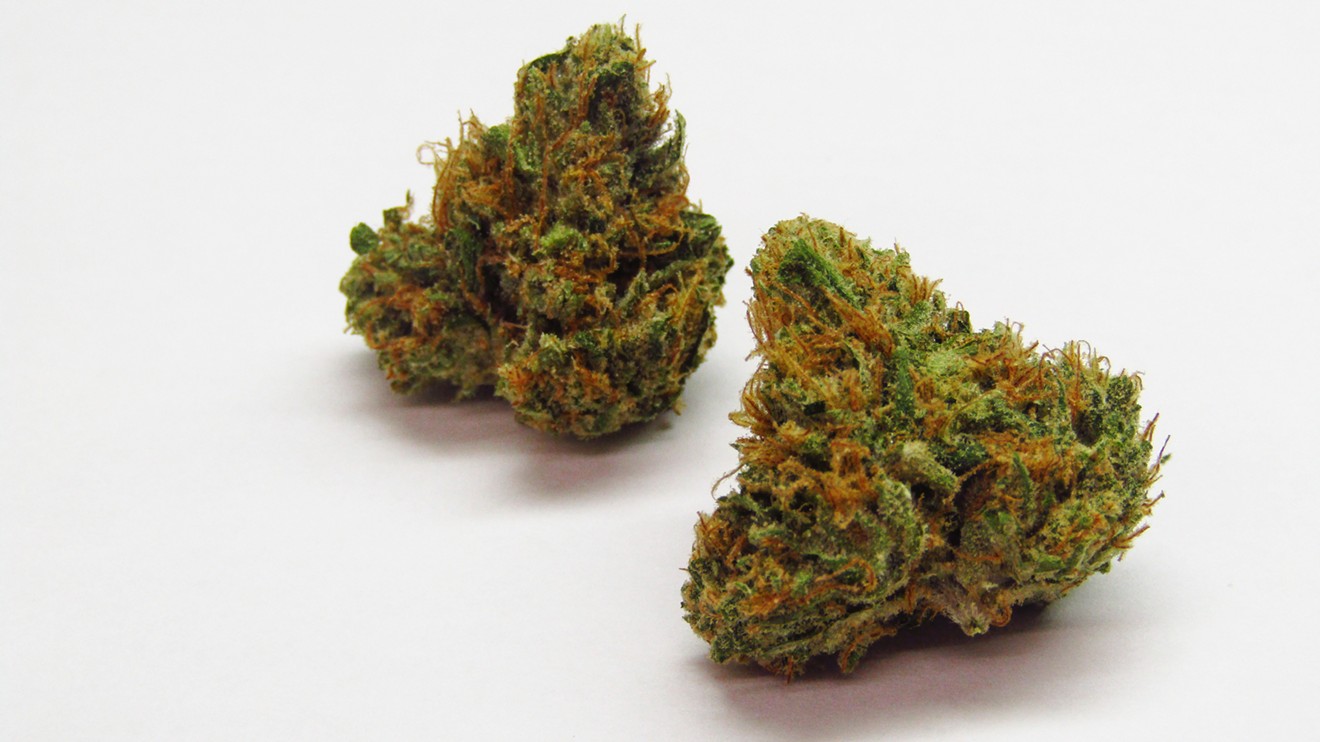 Some users like Tangerine Dream during the daytime, but the name says it all. Herbert Fuego
You have hits and misses when buying new weed. Lately, I've had a lot of misses. The weed itself has been fine, but my reaction to it — slow, groggy and despondent — has not been. Maybe this is a by-product of limiting myself to pre-orders out of ’rona fear and not engaging with budtenders before making my purchase (not that we're allowed to smell before we buy now anyway), or maybe my body is just changing; lord knows the shape of it has.

Being the cheapskate that I am, though, an in-store-only sale was the only thing that was going to drag me inside a dispensary. And that's when I thought I'd found my dream strain for curing my weed woes.

Initially presented with a lineup of potent OGs and Cookies varieties, I asked the budtender for something that was more on the straight-and-narrow path for daytime use but still flush in the flavor department. She pulled out something from the corner with the name Tangerine Dream. Although she wasn't very enthusiastic while describing it as a "light high," the mild potency was exactly what I was looking for. But as the world always proves, few of us ever get to live out our dreams.

Tangerine Dream's history, a tangled web of different strains mixed together by the famed Dutch breeder Barney's Farm, doesn't exactly shout smooth sailing toward productivity. No, pairing together Afghani, G13 and Neville's Haze sounds much more like a weed salad that ends with an early bedtime. Afghani and G13, both heavy nighttime strains, make me an oozing puddle of lethargy, and Neville's Haze usually turns me into a lost, useless bouncy ball. Nothing about that combination says easy daytime high to me, but the budtender wasn't the only one who's described Tangerine Dream that way.

The majority of online write-ups list Tangerine Dream as a daytime strain, carrying the rare distinction of providing energy while also relieving pain. However, most user accounts are split down the middle as to whether it relaxes or uplifts them. Count me in the former group, because every Tangerine Dream session I've had amps me up for ten minutes before sucking me back down to earth, pummeling my motivation like a blunt of Lilac Diesel or Bubba Kush. Such calming effects would be good for medicinal purposes, but they're nowhere near what I'm looking for in a daytime high. But what should I have expected from a strain with "Dream" in its name?

We've caught Tangerine Dream at DANK, L'Eagle, Lightshade, Medicine Man, Rocky Mountain High and Rocky Road. Every cut I've tried, including those grown on the black market, has carried similar up-and-down highs and strong citrus characteristics, but on the sweeter end of the spectrum, with resinous, sour notes of pine needles.

Looks: Like many Haze and sativa-leaning strains, Tangerine Dream has tall, fluffy buds with an electric lime-green color that stands out even more thanks to a thin layer of trichomes.

Smell: More sour and funky than contemporary tangerine strains, Tangerine Dream's aroma builds its way up to a mandarin orange smell by the time it reaches the bridge of your nose, but not before dropping off earthy, floral notes on the way.

Flavor: Tangerine Dream's flavor begins with resinous, earthy notes that swell before bursting into a sweet citrus flavor, much like a West Coast IPA, but less bitter. Those citrus flavors are much more sweet than sour — like mandarin oranges or tangerines, with a rubbery sourness that's present but separate.

Effects: Consider Tangerine Dream's effect "50/50," but only because half the people who smoke it feel one way and the other half feel the other way. (What do you want from me?) Although some users report a light energetic uplift, I'm among those who feels a heavy body relaxation and grogginess. Whichever range you fall into, though, the strain has proven effective.