Celebrate the Fourth of July With These Concerts 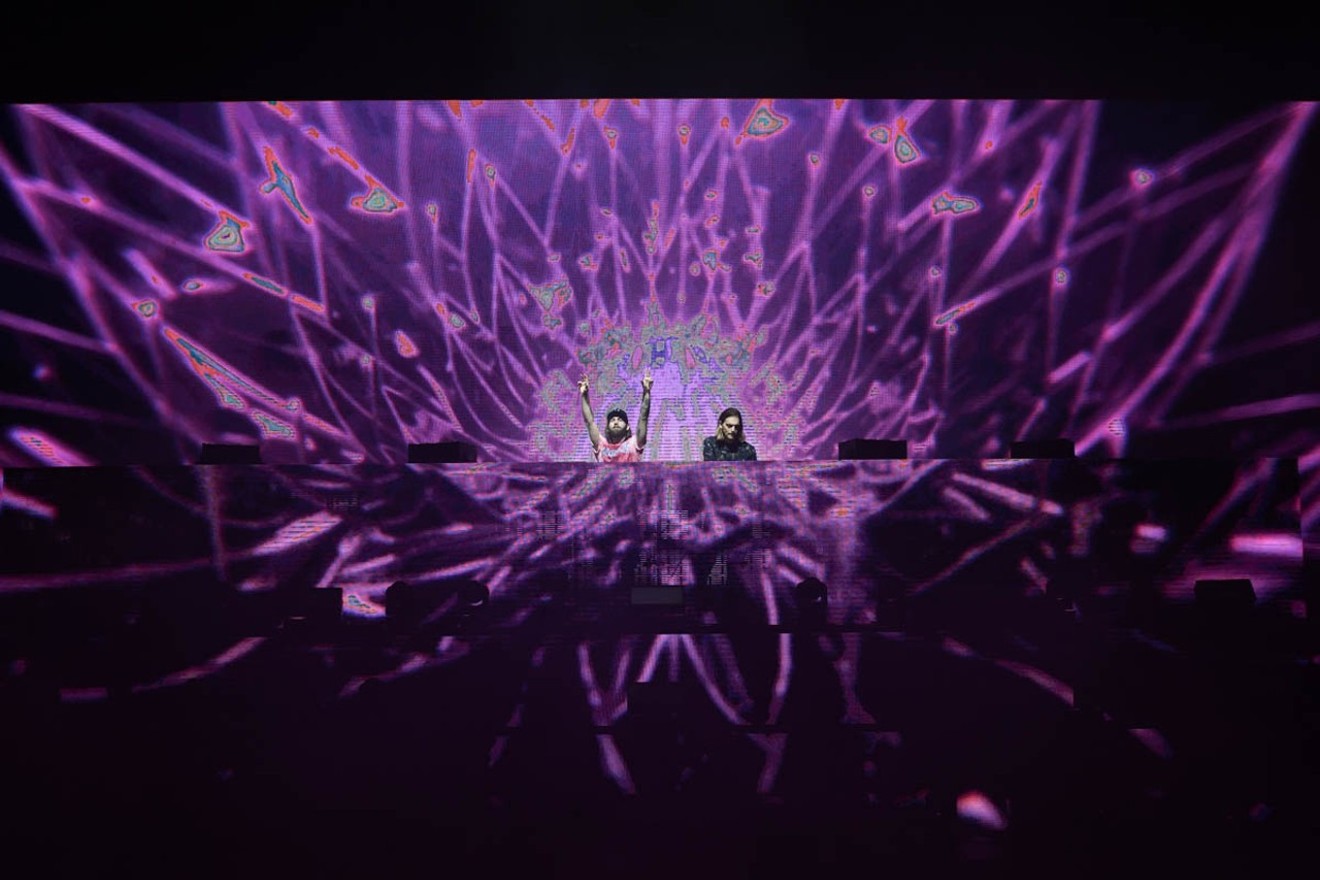 Zeds Dead plays two Fourth of July shows. Miles Chrisinger
There are a few necessities for the Fourth of July: lit sparklers, grilled hot dogs and chilled watermelon, family and friends and fireworks. And, of course, music. Sure, you could kick up the volume on a radio you brought from home, but why do that when there are a plethora of options in and around Denver where you can hear live tunes in person?

Here’s your musical menu for a fantastic Fourth in Denver:
Blues Traveler
Red Rocks Amphitheatre, 18300 West Alameda Parkway, Morrison
Monday, July 4, 6 p.m.
One of Denver's most popular traditions is Blues Traveler's annual Independence Day appearance at Red Rocks Amphitheatre, a steady gig for the band since 1994 (with a couple of exceptions, one of which was the first year of COVID). This year's show includes the Robert Randolph Band and Cory Wong as special guests. Tickets to the often sold-out show are still available at $35-$65.
Greer
Globe Hall, 4483 Logan Street
Monday, July 4, 7 p.m.
SoCal alt-rock band Greer has been tearing it up since 2018, and it's touring in support of its new EP, Happy People. Greer comes to Globe Hall for a Fourth of July show that also includes Disq and the Static Channel. Tickets ($25) are still available at the Globe Hall website.
Boulder Symphony
Boulder Bandshell, 1212 Canyon Boulevard, Boulder
Monday, July 4, 7 p.m.
What could be more American than a symphony in a park bandshell? Not much — so pack up your cold root beers, your striped coats and straw skimmer hats and head to Boulder to hear the band strike itself up while the sun starts to go down. Tickets are $10 for adults, $5 for those seventeen and under. 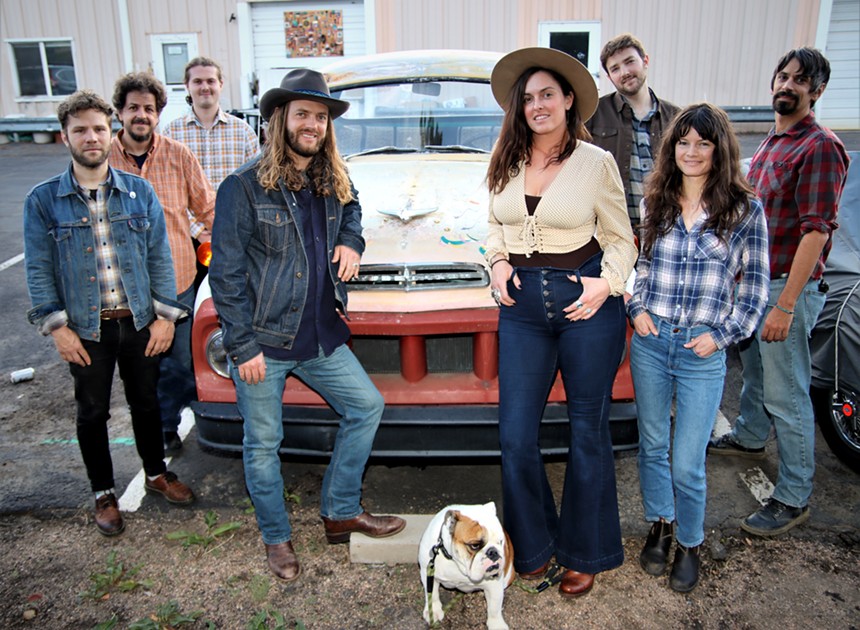 Adam Perry (far right) has assembled Rolling Harvest, a Neil Young/Bob Dylan tribute band.
John Spalvins
Rolling Harvest
Annual Jamestown Fest, Elysian Park, 117 Main Street, Jamestown
Monday, July 4, 5 p.m. (festival hours are 8 a.m.-11 p.m.)
We just reported on the very Colorado band Rolling Harvest, an entourage of local musicians devoted to the work of legends Neil Young and Bob Dylan. The band's first gig will be at the Jamestown Fourth of July festivities this year — part of a more than century-long tradition celebrating Independence Day in Jamestown. Founder and occasional Westword contributor Adam Perry calls the shebang "one of my favorite things in Colorado." Even better — the event is free!
Thumpin’
E.B. Rains Jr. Memorial Park, 11701 Community Center Drive, Northglenn
Monday, July 4, 7 p.m.
Thumpin' bills itself as "Denver's favorite dance band," combining two lead vocalists with a rhythm and horn section and a list of musical favorites that spans a half-century of funk, soul and R&B. The city of Northglenn has invited Thumpin' to bring its "maximum groove" to the official Fourth of July bash, where booties will most definitely shake and many moves will be busted. This event is also free to attend.
Sisters of Rock
Carmichael Park, 650 East Southern Street, Brighton
Monday, July 4, 7 p.m.
Boasting “some of Denver’s biggest voices,” according to its Facebook page, Sisters of Rock includes Sonya Surrett and Ryan Smiley paying tribute to six decades of female recording artists. Covering the work of such legends as Aretha Franklin, Blondie, Heart, Pat Benatar, the Go-Gos, Madonna, No Doubt, Adele, Lady Gaga and many more, the Sisters of Rock will be lighting up Brighton as part of the city’s “Flix and Kicks” summer series. The free Brighton event also showcases one of the region's biggest firework displays, so bring a lawn chair to kick back.
Zeds Dead
Civic Center Park, Broadway and Colfax
Monday, July 4, 3 p.m.
Mission Ballroom, 4242 Wynkoop Street
Monday, July 4, 8 p.m.
There are two ways to see the Canadian duo Zeds Dead in Denver on the Fourth. The first is the DeadBeats Backyard Jamboree at Civic Center Park, which also includes Blunts & Blondes, Mersiv b2b Smoakland, Dr. Fresch, So Tuff So Cute, Effin, BLVK JVCK and Saka. Tickets start at $65.

But if you're more a creature of the night, you can catch Zeds at the "Deadrocks Hangover" at one of the city's best venues, the Mission Ballroom, with special guest Ternion Sound. Tickets are $49.50-$89.
KEEP WESTWORD FREE... Since we started Westword, it has been defined as the free, independent voice of Denver, and we'd like to keep it that way. With local media under siege, it's more important than ever for us to rally support behind funding our local journalism. You can help by participating in our "I Support" program, allowing us to keep offering readers access to our incisive coverage of local news, food and culture with no paywalls.
Make a one-time donation today for as little as $1.