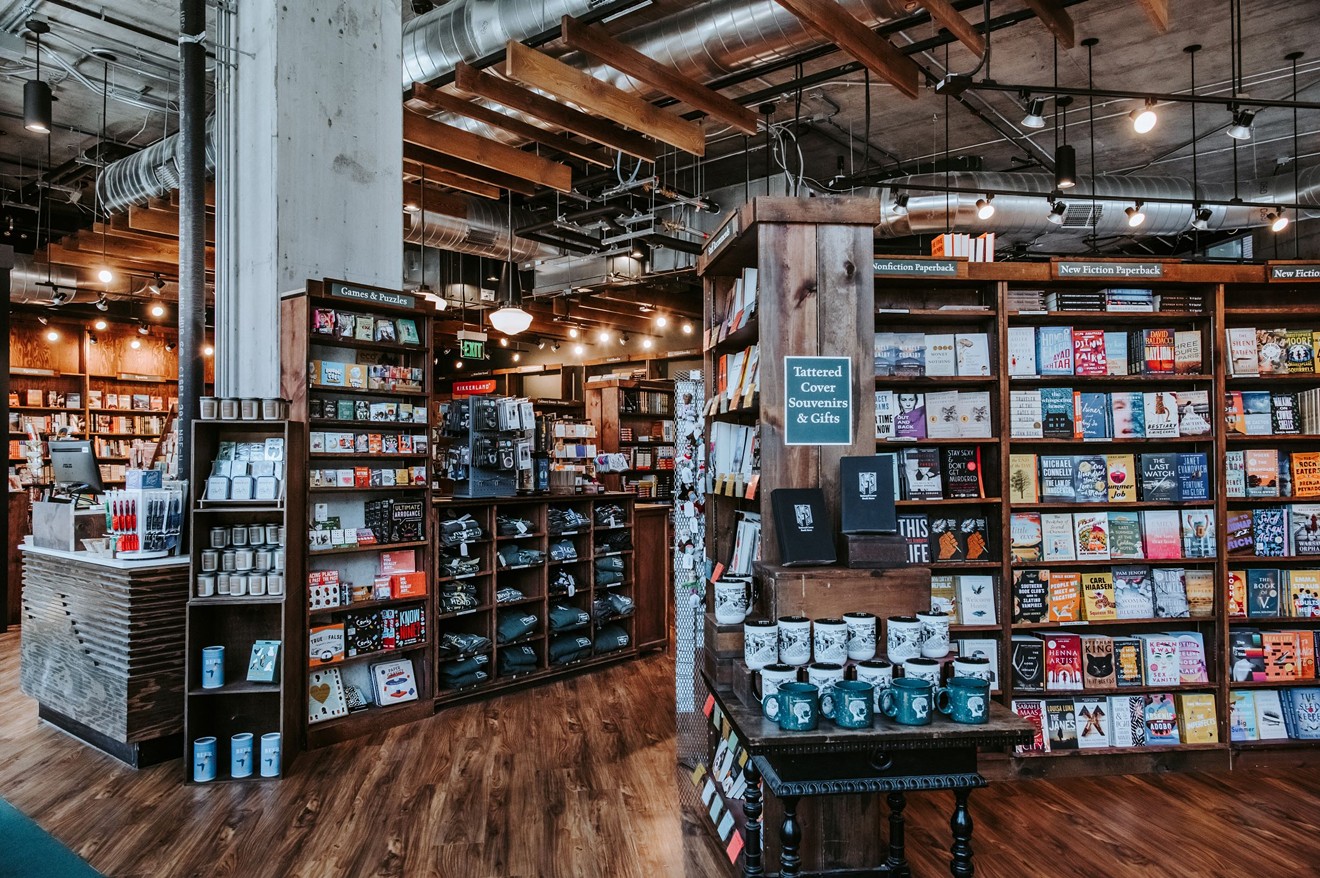 Inside the new Tattered Cover at McGregor Square. Lucy Beaugard
The decision to close the Tattered Cover store on the 16th Street Mall and move to the still-under-construction McGregor Square was made in 2019, when owners Len Vlahos and Kristen Gilligan, who'd taken over from Joyce Meskis, were grappling with the challenges of keeping a book store viable. Those challenges only got worse during the pandemic, and late last year the local, independent chain changed hands.

But Vlahos and Gilligan were able to work with the new ownership group led by CEO Kwame Spearman and see much of their vision realized. And as Kyle Harris noted after visiting the store at 1991 Wazee Street, which opened June 12: "When longtime Tattered patrons walk in, they'll find plenty of traditions to embrace, a few things to wonder about, and at least one thing to downright loathe."

Many people still miss the flagship store on First Avenue, which was replaced by the first downtown store in 1994; since then, Tattered opened its place in the Lowenstein complex on Colfax Avenue, as well as outposts in Aspen Grove and Union Station. (There are bookstores with the Tattered brand at Denver International airport, but those aren't run by the chain.) But even as readers share their memories of other Tattered Cover locations in comments on the Westword Facebook page, they express interest in this next chapter. Says Lewis:


Good article. I've been prepared to hate the new place and expected to get some help with that from reading this. But it kind of changed my mind, and if ever I'm down that way and can find parking, I might even stop by. But I'll always be skeptical about this move to one of the most expensive, gentrified and inaccessible parts of Denver. Don't pretend it's going to be diverse and welcoming after doing that.


I'm curious about the changes — to the books. The article says absolutely nothing about the content, selection and peruser amenities of the new location. It's like the Steel Magnolias Olympia Dukakis scene, broadcasting for a football game saying the players' pants are aubergine while ignoring the game itself.


I have fond memories of living in a loft above the mall location and slumbering down to the book store and reading the Sunday paper as if it were my living room. And there were more nights than I’d like to admit when a couple of cookies and a cup of milk was dinner. The postal service building was still there and the closest grocery store was the Speer King Sooper.

I'm still reeling from the move to 16th Street from First Avenue. I used to spend entire weekends in the old Cherry Creek store.

I miss the smell of the Cherry Creek TC.


I'm making my shopping list and checking it twice. As much as I'll miss the LoDo store, I'm delighted the Tattered Cover is still around to connect us with the best the publishing world has to offer.

Read Kyle Harris's assessment of the new store here.
KEEP WESTWORD FREE... Since we started Westword, it has been defined as the free, independent voice of Denver, and we'd like to keep it that way. With local media under siege, it's more important than ever for us to rally support behind funding our local journalism. You can help by participating in our "I Support" program, allowing us to keep offering readers access to our incisive coverage of local news, food and culture with no paywalls.
Make a one-time donation today for as little as $1.