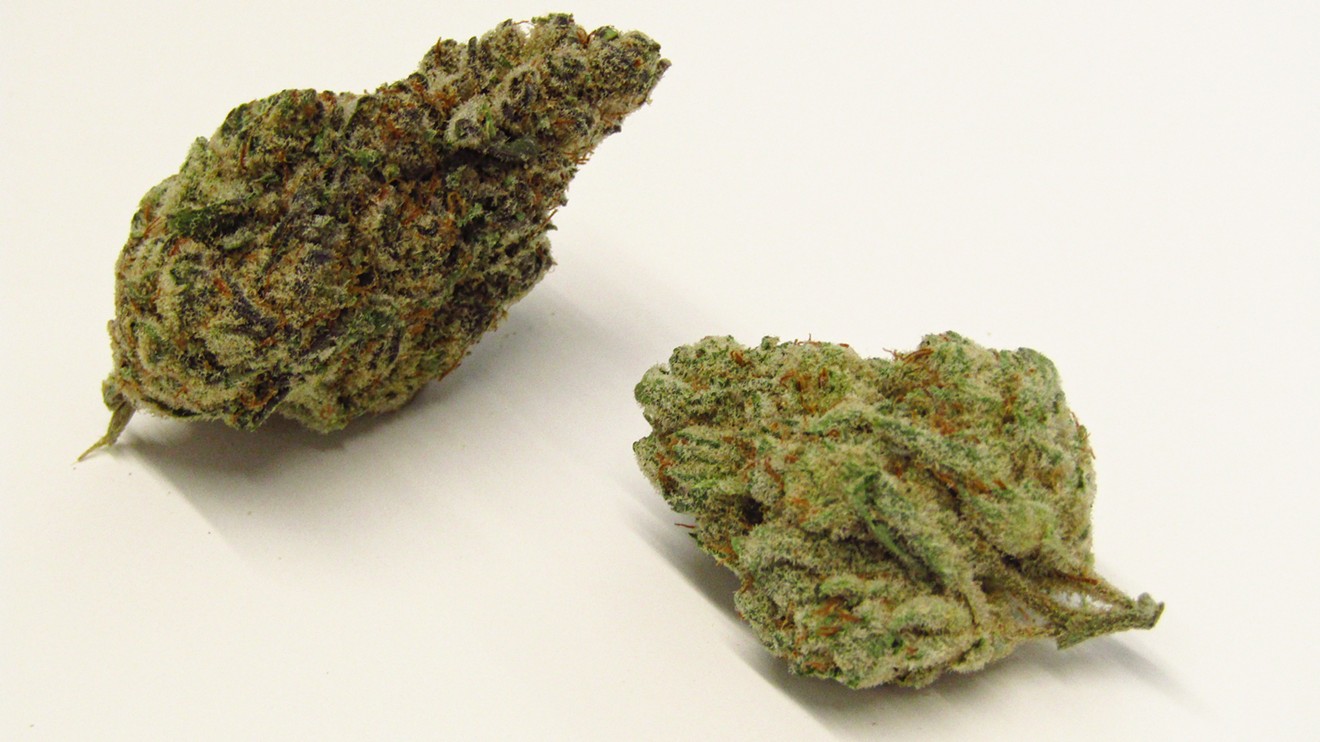 Apple Pie before a workout? In this circumstance, it works. Herbert Fuego
As American as baseball and apple pie are supposed to be, they didn't originate here. Baseball wouldn't exist if stoolball and rounders weren't played in England hundreds of years earlier, and other countries baked apples and cinnamon under a crust long before the pie was claimed by the United States, where apples aren't a native species.

Yes, apple pie is a fraud, stolen from other countries and cultures — or is it an adopted child that we've modified and made our own? Both sides of the argument sound extremely American, and sort of like cannabis cultivation: A breeder creates a strain, and growers use those genetics to make a spinoff of the original. That might make Apple Pie the most American strain on the market, if it hadn't shown up so late.

An older version of Apple Pie bred from Acapulco Gold and Highland Nepalese reportedly exists, but the Apple Pie I've come across is the Alien Genetics version, which carries Slymer and Sour Apple IBL genetics. However, Apple Pie is neither the most popular apple or pie variety in stores right now, with Apple Fritter, Apples and Bananas, Cherry Pie, Grape Pie and Sour Apple just a few of the orchard or pastry strains that have a bigger footprint in the market. If current customers' preferences continue leaning toward potent highs and ridiculous THC percentages, Apple Pie's status as a session strain might stay that way.

Session strains — or cannabis that provides some effects without totally obliterating us — are slowly becoming popular among experienced users who don't want dabs or caviar joints. A relaxing daytime high that doesn't drain energy, supercharge appetites or kill concentration actually sounds pretty great for mid-day stress relief. Like a warm slice of dessert at lunch, Apple Pie provides that — but without the bloating and ensuing nap.

Looks: Apple Pie's buds like to stretch but are rarely dense, so keep them in a tight jar to avoid dryness. The light buds have a sativa-heavy look, with pear-colored calyxes and average trichome coverage.

Smell: Slightly sour and acidic up front, Apple Pie's aroma has enough interesting components to raise my eyebrows, but they're not very strong. Earthy, floral notes linger after the end and are too strong for my nose to enjoy the subtle hints of mulled spices and citrus rind that give Apple Pie an apple cider-like quality.

Flavor: This is where the grower really matters, because I've had Apple Pie that pumps out sweet, lasting flavors of sour apples and vanilla. But the majority of what I've tried tastes like flowers and soil with the occasional sour aftertaste. This is the weakest quality of the strain.

Effects: Apple Pie's relatively clear high might not provide the heavy effects most daily tokers or serious medical marijuana patients are looking for, but I welcome the functionality. Distractions and the munchies are minimal, and, most important, so are anxiety and/or drowsiness. Great for chores, the outdoors or exercise if that's what you're into, Apple Pie is more of a pre-workout than dessert.

LoCol Love grows the majority of wholesale Apple Pie in Colorado dispensaries right now, with the Lab extracting the strain for distillate PAX pods. The Green Solution and the dispensary chain's in-house extraction brand, Nectarbee, also grow and extract Apple Pie. Neither cut will blow you away, but LoCol Love's version provided a smooth, enjoyable smoke and good-looking buds. If you find it for $30 an eighth and want a daytime high without the munchies or comedown, jump on it.