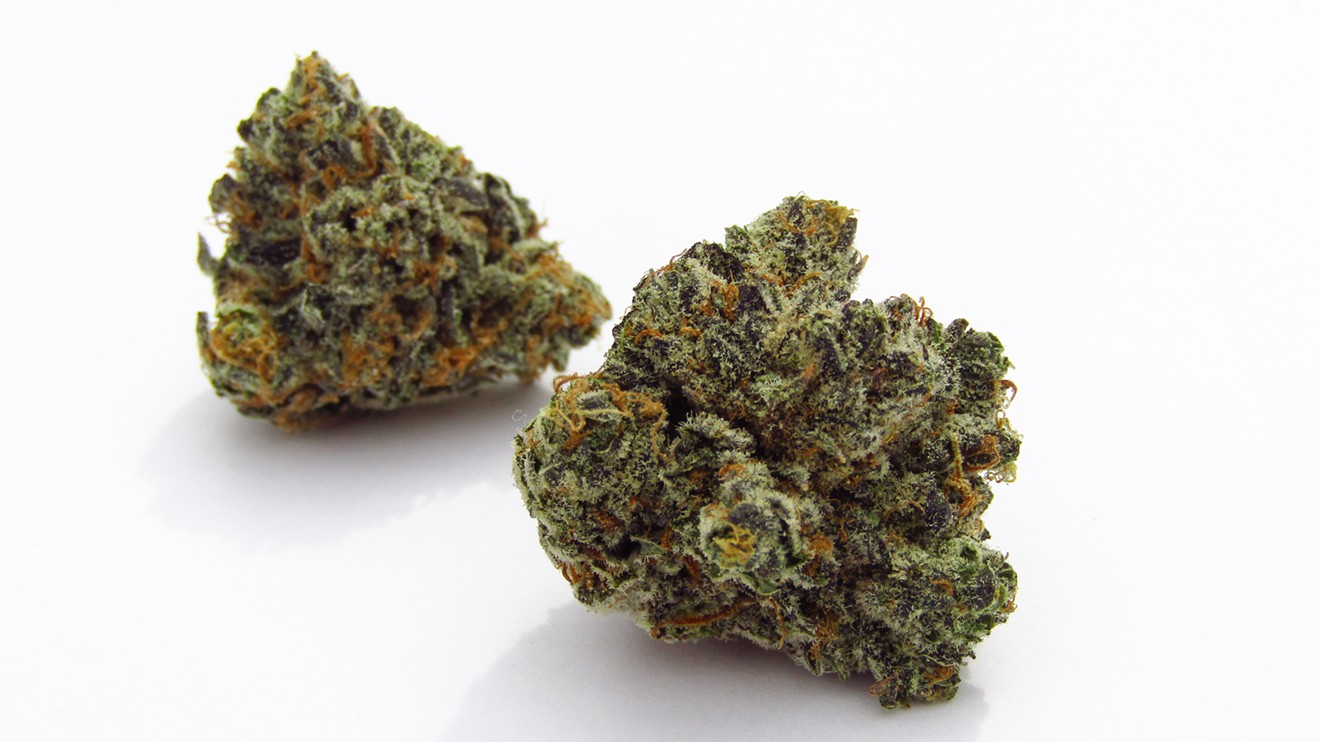 Blue Cheese is making a comeback in Colorado. Herbert Fuego
Ranch flavoring is so American that other countries don't have a similar concept or even a comparison; Doritos describes it as "Cool American Flavor" in Europe. Frank's Hot Sauce might claim that we put that shit on everything, but in reality, most Americans go for ranch. Me, personally? Give me bleu cheese with my wings, extra stanky. That's just how I want my weed, too.

U.K. Cheese is one of my all-time favorites, carrying a creamy funk that helped redefine what we looked for in cannabis smells. The strain, although still a popular choice, never spawned a family tree worthy of its attributes, but it did produce at least one lovely child, partnering with an even bigger classic, Blueberry, to spawn Blue Cheese. Both parent strains are from Europe, with U.K. Cheese's location fairly obvious and Blueberry hailing from Amsterdam. Maybe that's why America hasn't really embraced their child.

Like both of its parents, Blue Cheese was a prototype of the future, pumping out a combination of berries and cheese replicated by so many strains today. But anyone who's smoked weed for more than ten years knows this is the O.G. equivalent of smoking a fruit and cheese board, even if disappears every now and then. Thanks to renewed interest from commercial growers and dispensaries, though, Blue Cheese is making a comeback in Colorado — and I couldn't be happier.

In nearly every aspect, Blue Cheese is best kept for the end of the night; it tastes like a dinner-party dessert before pinning your body under an invisible weighted blanket within the first hour. And just as they submit to a thirty-pound layer of cotton and plastic pellets, your muscles quickly become warm, relaxed and completely useless. Such a simple high and those clear flavors created a loyal following, especially before so many options were available in legal markets. Because of that, Blue Cheese will never go away, but it'll never overtake Blue Dream, OG Kush or the other ranch dressings of the weed world, either. Fine with me: That just means more for the rest of us.

We've recently caught Blue Cheese at A Cut Above, Buddy Boy, Budcardi, Cherry Peak, Cookies, Diego Pellicer, Eclipse Cannabis, the Farmer's Market, La Conte's, Life Flower, Magnolia Road, Medicine Man, the Peaceful Choice, Silver Stem, Standing Akimbo, Star Buds, Terrapin Care Station and Wolfpac, with Antero Sciences providing it to at least half of the dispensaries around town. Antero's take hits all the notes in my nostrils, but the flavor doesn't back it enough. The take from 710 Labs, although a little more expensive and harder to find, is worth the extra searching if you're really craving the bourgeoisie bleu.

Looks: Like a classic indica, Blue Cheese is dense, forest green, and can be low in trichome coverage compared to Gorilla Glue, with occasional blue-violet spots.

Smell: The strongest sensory aspect of the strain, Blue Cheese's aroma is balanced, easy to read and enjoyed by old-school and beginning users (a rare trait in cannabis). I usually get a mix of blueberry syrup and sharp cheese up front, followed by a skunky-earthy mixture and hints of peppercorns at the end.

Flavor: Blue Cheese's flavor isn't as creamy as the first cheesy wave that hits your nose, but still packs a funky punch, effectively cutting into the sweet, berry flavors. Although spicy, earthy notes take a back seat in the smell, they're more assertive on the tastebuds.

Effects: A small amount of users report more of an uplifted and creative experience, but virtually no one feels more energy after smoking Blue Cheese. My nerves and mental stress are calmed minutes into a session, and the muscle relaxation and hunger hits shortly after. I've stayed awake through Blue Cheese highs, but am rarely better because of it, so give into the nap when it comes.