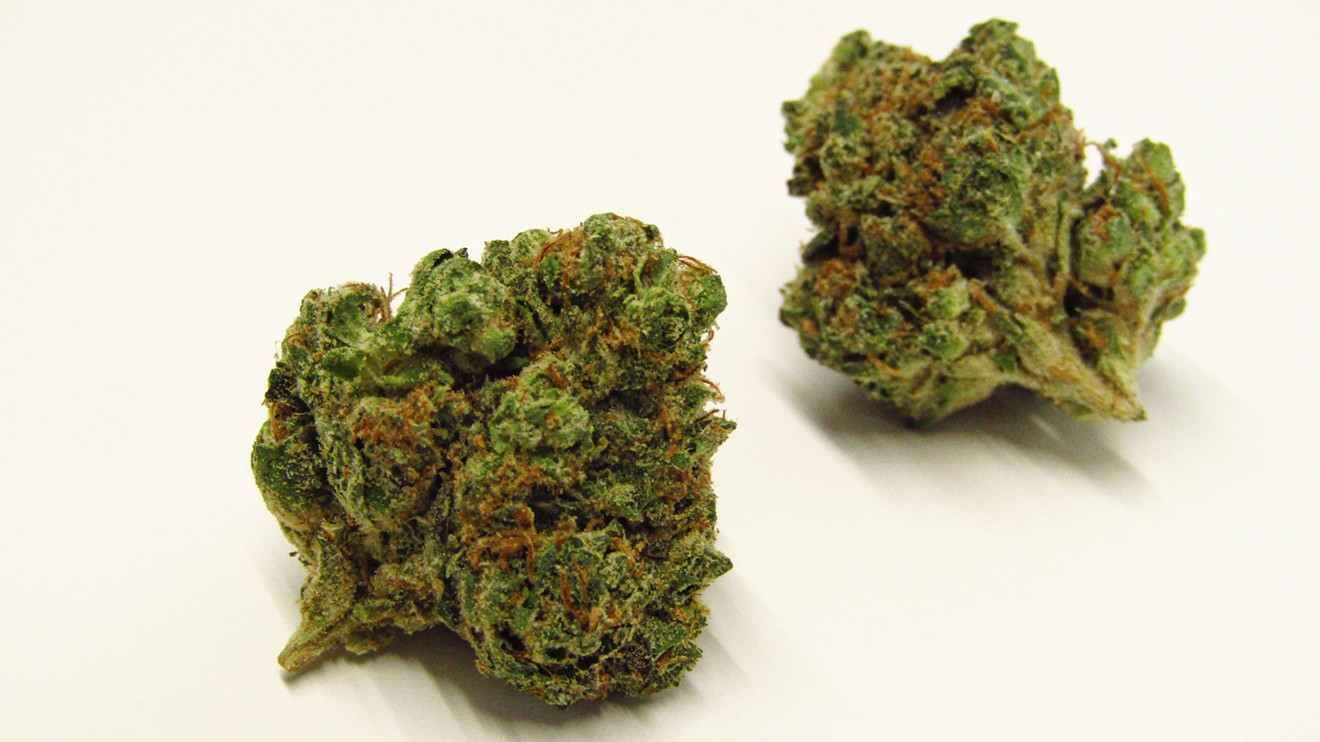 Kitchen Sink is burning through Denver with acclaim. Herbert Fuego
Maybe it's a side effect of stoned curiosity, but I'm always looking up how idioms were created. "Cold shoulder" was born over 300 years ago when a Latin Bible was mis-translated. "Dressed to the nines" is so old and Scottish we can't even agree where it comes from. Then you have "Throw everything but the kitchen sink," a popular saying for American military efforts during World War II — or World War I, depending on whom you ask.

Idioms don't make literal sense, and their backstories are often cloudy or disputed, yet we still cling to them, often without a shred of context. Sound familiar?

The map of cannabis strains is slightly easier to navigate since legalization, but much of it is still essentially Charlie Day surrounded by strings, muttering a Pepe Silvia conspiracy. Genetics can be muddy, stolen or completely made up. You could be sold something called Raspberry Sorbet and actually be smoking anything but — including the kitchen sink. At least the people at Cannarado have acknowledged as much.

Kitchen Sink, Cannarado's cross of GMO and Sundae Driver that straddles the fence between body relaxer, trouble eraser and smile inducer, has become popular in the Rocky Mountains recently. The high has all the offerings for an easy day, but can put your brain in the garbage disposal just as fast.

Sundae Driver is one of my favorites for postponing worries until tomorrow. And GMO...well, GMO just makes everything more stoney baloney. Mixing the two together is like throwing gamma rays on Henry Winkler and giving him the ability to turn into the Incredible Hulk. He's so cute and harmless, but cross a certain line and you will be pounded into the dirt and fossilized.

Smell: Kitchen Sink's aroma is nutty and sweet on impact, with an herbal overtone that covers more complex menthol qualities hiding underneath. I've also noticed hints of vanilla and a strong gassy back end on well-cured Kitchen Sink buds. Give it a pinch, and you'll notice something different each time.

Flavor: Similar to Kitchen Sink's smell, the flavor can go in several different directions, even when coming from the same harvest. Vanilla and nutty notes are noticeable up front, with herbal, mint and rubber characteristics lingering after.

Effects: Kitchen Sink's effects were balanced and didn't completely rob me of energy, but I still wouldn't smoke it before 5 p.m. The pain relief and heady effects stopped just short of domination, leaving my body slow to react and my mind content with anything — or nothing. I could see medical users enjoying this for daytime relief, but this is an evening strain for most recreational purposes.

Popular among cultivators and extractors, Kitchen Sink has been grown by Ascend, Boulder Built, DANK, Hava Gardens, Haze, Indico, Malek's and Natty Rems, while Äkta, AO Extracts, Binske, Infinite Infusions, Natty Rems and Sira Solutions have made several concentrated versions of the strain. Indico and Malek's takes have been my favorite wholesale versions so far, offering rainbows of terpenes and enjoyable highs, while Ascend's in-house version has scored high among deal seekers. If you're lucky enough to find Äkta's live solventless concentrates, though, that's the best option for Kitchen Sink's high and flavor.