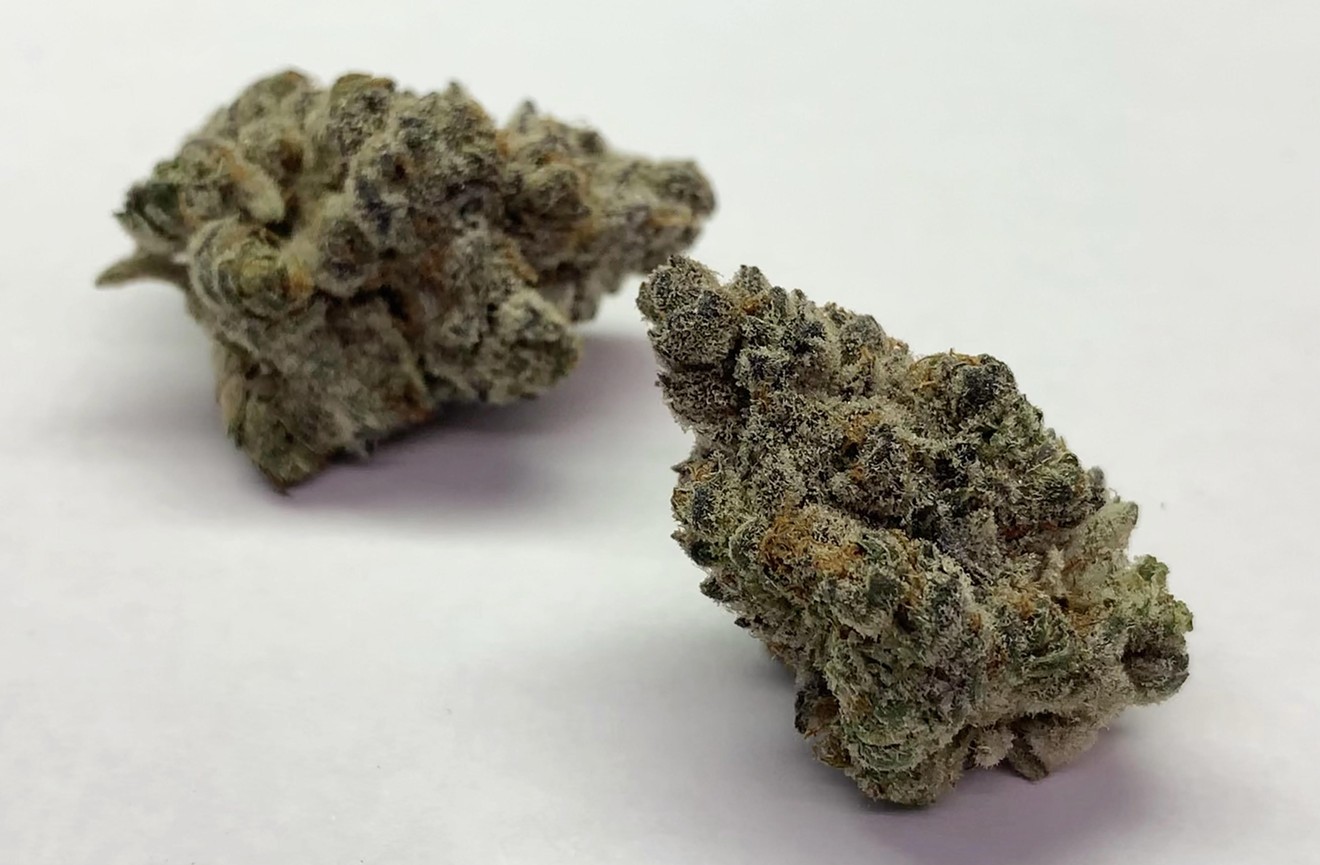 Caption: Good luck trying to pin the tail on anything after a bowl of Punch Cookies. Thomas Mitchell
Everyone hits an age when the refreshments served at birthday parties change from punch and cookies to booze and more booze. For some of us, that happens in high school. For others, it's college. But then people have children, and the punch and cookies return. Despite being a single shlub with no kids in my future, I still bring Punch and Cookies to the party — Purple Punch and Cookies weed genetics, that is.

Outside of the recent Garlic craze and Chemdog resurgence, it's hard to think of two strain families more popular in Denver over the last year than Cookies and Purple Punch. Virtually every child that either cultivar produces becomes a heavyweight contender in potency, couch lock and sugary flavors, and both are coveted in their concentrate forms, as well. There are clear distinctions between the two, however, with Punch strains typically more syrupy and sedative, living up to that Grand Daddy Purple influence, while Cookies carry their famous sweet, doughy flavors and a high that doesn't discriminate between mind and body.

Any child of the two has multiple family names to uphold, which is no small task. Punch Cookies (also known as Cookie Punch and Purple Cookie Punch), considered a rarity among home growers, had done this mostly on reputation alone, but when one of Denver's better cultivators took it on, I knew the time had come to take a bite — or drink? Or smoke? Certainly I'd be doing all three shortly afterward — of the legacy strain.

Celebrity marriages have produced some beautiful talents, like Zoë Kravitz. But for every Zoë Kravitz, there are five Jaden Smiths. I was fairly certain that Punch Cookies would be a Zoë, but there's always that lingering fear that smoking something new will lead me down a path of unintentionally funny attempts at philosophy. Luckily, Punch Cookies did a crackerjack job all around, with aromatic levels of grape soda, pine and sweet biscuit all registering separately after I broke a nug in half. The high was similarly parsed out, making me a stoned, giggly college boy for about twenty minutes before I quickly recovered into the clear-minded, productive renegade who just happens to smoke weed  — but about an hour into crushing stoned life, I could feel my energy draining and my eyes starting to droop. That didn't stop until I found my bed.

We've caught Punch Cookies and its alter egos at Colorado Harvest Company, The Herbal Center and Verde Natural. Dispensaries carrying DabLogic, Verde's concentrate brand, may also carry the strain in hash form. Although that's not a long list, it would be hard for anyone to top Verde's cut, which was strong enough to last me a few days longer than most strains have during the pandemic.

Looks: Passable as either of its parents, Punch Cookies plants are usually on the squatty side, with dense buds that tend to turn purple (but not always) before ultimately becoming decked out in a milky layer of resin.

Smell: If Punch Cookies were a one-two combo, that syrupy Purple Punch aroma — a mix of sour balsamic and grape soda — would be the knee-buckling uppercut before a left hook of oak, mud and bready sweetness makes my eyes roll back.

Flavor: Punch Cookies' yeasty and pine flavors combine for a dry taste up front, with sweeter notes of grapes and berries before an unexpectedly creamy, nutty aftertaste quietly rounds everything out.

Effects: I felt Punch Cookies' power in my eyes and head immediately, a cloudy euphoria that could be disorienting for lower tolerances. But the fog cleared shortly, and although I continued moving slightly slower than usual and couldn't stop eating, all functions seemed to operate fine while I stupidly smiled my way through the next few hours. The comedown surely came, though, and it wouldn't let go until both eyes were closed.